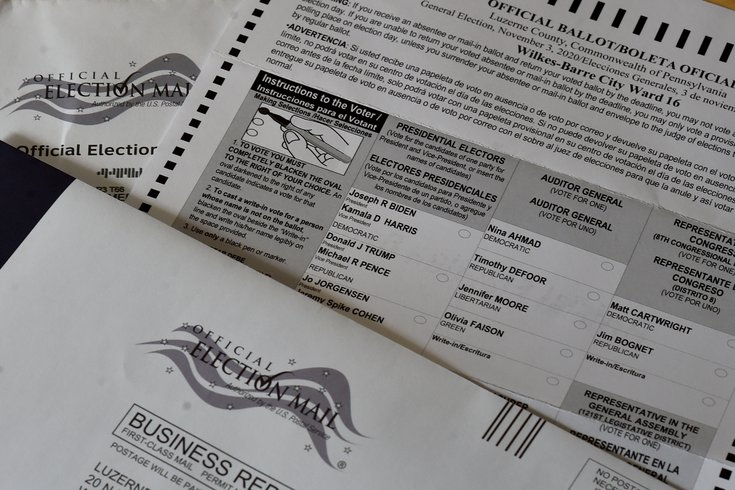 A view of an official Mail-in ballot for the 2020 general election for Wilkes-Barre, PA. Pennsylvania state Supreme Court ruled Friday that mail-in ballots can not be disqualified for mismatched signatures.

A ruling handed down by the Pennsylvania state Supreme Court on Friday decided that mail-in ballots can not be excluded from counting due to mismatched voter signatures.

The issue of signatures was raised ahead of the increased number of voters -- in Pennsylvania and nationwide -- voting by mail due to the coronavirus pandemic. Now, counties can't disqualify a ballot for how its signature looks when tallying votes for the Nov. 3 general election.

Court documents from the Pennsylvania Supreme Court showed the ruling was based on the state's Election Code.

"We conclude that the Election Code does not authorize or require county election boards to reject absentee or mail-in ballots during the canvassing process based on an analysis of a voter’s signature,” the Pennsylvania Supreme Court wrote in their ruling.

Pennsylvania Secretary of State Kathy Boockvar then asked the state Supreme Court to issue a ruling further validating the initial guidance which was initially published by the office which she heads, the Pennsylvania Department of State.

Boockvar called the ruling a "huge victory" on Friday and published an educational video about mail-in voting in Pennsylvania.

"Pennsylvanians have been voting by absentee ballot for decades," Boockvar said. "The only new thing here is that more people can do it...but the processes are still the same."

Approximately 1.5 million voters have already voted in Pennsylvania, by using mail-in ballots. That is around 50% of the people who requested a mail-in ballot for the Nov. 3 general election.

Voter registrations in the state also reached a record-breaking 9 million people. Approximately 4.2 million of those people are Democrats, 3.5 million are Republicans, and around 900,000 are Independents, reported the Pittsburgh Post-Gazette.