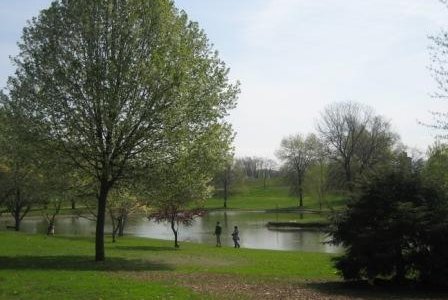 When Radio 104.5 used to hold its free concert series at the Piazza in Northern Liberties, it was essentially a free-for-all, with teenagers having sex and urinating in the streets of the surrounding neighborhood. I can remember attending one of these out-of-control free parties in my college days and looking up at one of the top-floor apartment windows, only to see a couple vigorously making love for all the concertgoers to see.

Once the crowd noticed, people began cheering. I would imagine that those in Wilkes-Barre's Kirby Park — which holds such wild events as the Cherry Blossom Festival and the "Old Fashioned" Fourth of July celebration — had a different reaction when they were exposed to a bit of voyeurism last week.

Per the Times Leader:

Police say that, around 7:43 p.m. Thursday, they located a pair of individuals in Kirby Park, with the female performing oral sex on the male.

The pair were identified as Jacqueline Getz, 31, of Edwardsville, and Kyle McClure, 29, of Wilkes-Barre.

According to police, the alleged indecent exposure occurred near the playground, and was observed by “several hundred” people in the park, with some of them being children ranging in age from 2 to 17.

Forcing innocent passersby to view your sex-having is never OK. But in front of a bunch of kids near a playground? Yeah, not a good look. Get a room.