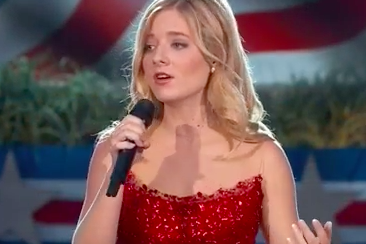 When President-elect Donald Trump officially assumes office at his January 20 inauguration ceremony in Washington, D.C., the American people will hear a vocal performance from a Pennsylvania teenager who was selected to sing the national anthem.

In an announcement Wednedsday morning on the "Today Show," 16-year-old Jackie Evancho revealed that Trump asked her to sing "The Star Spangled Banner" for his swearing-in ceremony, adding to a series of high-profile gigs the Pittsburgh native has landed over the years.

Evancho gained public recognition at ten years old when she competed and finished second on "America's Got Talent." The classically trained crossover artist has gone on to sing "O Holy Night" for President Obama in 2010 and for Pope Francis during the 2015 Festival of Families in Philadelphia.

The rising vocalist's full-length debut, "Dream With Me," opened at number 2 on the Billboard 200 chart in 2011.

"As the youngest solo artist to ever go platinum, she is a true role model and inspiration for people young and old in our country and around the globe," said Boris Epshteyn, communications director for the Presidential Inaugural Committee, in a statement.

According to the Los Angeles Times, Evancho met Trump during a trip to Mar-A-Lago, where she has performed at several events over the years.

Here's Evancho singing the national anthem in her hometown for a Steelers game in 2015.