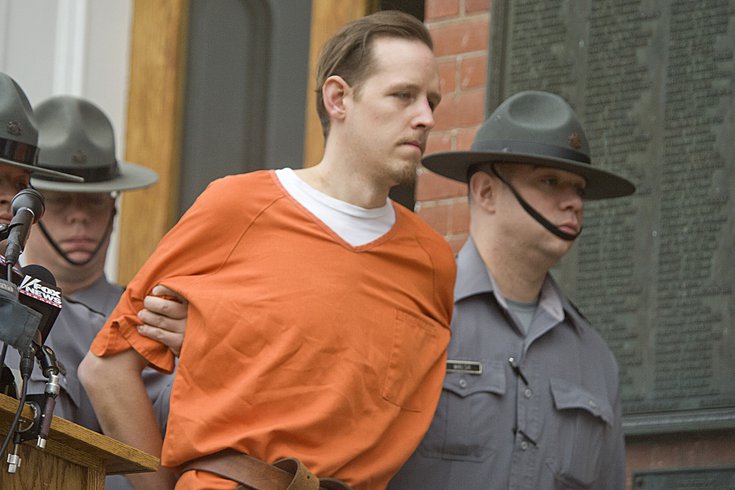 Eric Frein was convicted and sentenced to death in the 2014 shooting of two Pennsylvania State Troopers, after which he led authorities on a 48-day manhunt. A cache of guns seized from his parents during that time must be returned to them, an appeals court in Philadlephia ruled.

Authorities in Pennsylvania have been ordered to return 46 guns that were seized from the parents of Eric Frein, the anti-government survivalist who ambushed two state troopers in the Poconos in September 2014, killing one of them and severely wounding the other.

Frein notoriously led authorities on a 48-day manhunt through the woods of northeastern Pennsylvania before his eventual capture at an abandoned hangar near Tannersville, in Monroe County.

At the time of the Sept. 12 incident at the Blooming Grove barracks, in Pike County, Frein had been living with his parents at a home with a weapons cache that included 25 rifles, 19 pistols and two shotguns. Frein used a .308-caliber semiautomatic rifle to shoot Corporal Bryon Dixon and Trooper Alex Douglass during a late-night shift change.

During the manhunt for Frein, investigators seized the weapons cache from the gunman's parents, Eugene and Deborah, who were not charged in connection with the shooting. After Frein's 2017 conviction on murder and related charges, for which he was sentenced to death, his parents filed a lawsuit to recover the 46 guns that were held by authorities in Pike County.

The government had argued that it had a right to hold the weapons in case they were needed as evidence in Frein's state and federal appeals. A lower court sided with Pike County prosecutors, but on Tuesday the 3rd U.S. Circuit Court of Appeals in Philadelphia decided in favor of Frein's parents, the Associated Press reported.

The appellate court ruled that the state seized the Freins' property without compensation, in violation of the Fifth Amendment, and hindered their right to keep firearms in violation of the Second Amendment. None of the guns were originally used as evidence in Frein's trial.

In order to keep the guns, the Pike County District Attorney's Office would have to obtain a new warrant.

Frein, now 39, was suspected of trying to foment an uprising against the government. Though unemployed, he was considered a serious war reenactor with a deep knowledge of military history, but no previous inclination toward acts of violence. He worked on a pair of short films about military history, including "Lustig," a 2007 project in which he played a non-speaking role as a German soldier at the Auschwitz death camp in Poland. The film examined themes of guilt and redemption after World War II.

While he was on the run, Frein wrote a letter to his parents explaining that he had hoped to escape from the shooting undetected, but believed his time was running short. He complained of "depressing changes" in the country and the need for "a spark to ignite a fire in the hearts of men," which he thought his deadly ambush could provide.

"There is so much wrong and on so many levels only passing through the crucible of another revolution can get us back the liberties we once had," Frein wrote. "I do not pretend to know what that revolution will look like or even if it would be successful."

In 2017, the widow of Corporal Dixon filed a wrongful death lawsuit against Frein's parents, claiming that they ignored warning signs about their son and had raised him to become a militant anti-government outcast. Eugene Frein had regaled his young son with tales of fighting as a tank commander in the Vietnam War — stories that he admitted were completely made up when he testified at his son's trial. He had never seen combat.

The elder Frein also had taught his son that police were becoming too powerful and militarized, and that the government was aggressively curtailing too many rights.

"I failed Eric as a father," Frein said from the witness stand during the 2017 trial.

The manhunt for Frein cost Pennsylvania State Police more than $11 million, much of it in overtime costs for authorities who worked day and night to find him. When Frein was taken into custody by U.S. Marshals, he was shackled in Corporal Dixon's handcuffs and taken back to the Blooming Grove barracks in the slain trooper's squad car.

Frein's anti-government ideology was a harbinger of a wider spectrum of extremist agitation that has spread in Pennsylvania and elsewhere in the years after the barracks ambush. To date, more than 70 people from the state have been charged for their alleged roles in the Jan. 6 Capitol insurrection, behind only Florida and Texas, according to the Program on Extremism at George Washington University.

Frein is being held at SCI Phoenix in Montgomery County and had an execution date scheduled in June 2020, but he was granted a reprieve due to Pennsylvania's moratorium on the death penalty, which has been in effect since 2015.

The state has only executed three inmates since the death penalty was reinstated in the 1970s, most recently in 1999, when Gary Heidnik was given a lethal injection for kidnapping and killing women in his Philadelphia basement. The three inmates last executed all had given up on their appeals. Frein's appeal was denied in 2020 by the U.S. Supreme Court, which upheld his conviction and death sentence.