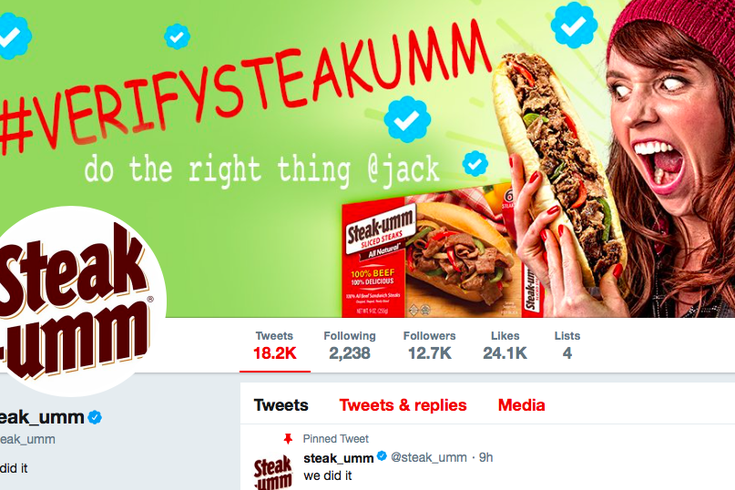 Getting your Twitter account verified with that little blue checkmark is a badge of pride. It's a status reserved for the most sought-after of celebrities, savvy brands and original personalities.

Sometimes, you have to be bold and shameless to get Twitter to give you the respect you deserve. That's what Steak-mmm, the Reading-based producer of thin-sliced and frozen steaks, accomplished on Monday.

Thanks to a phenomenal string of hilarious tweets and gifs, the DIY cheesesteak meat producer is now verified by Twitter.

OPERATION #VERIFYSTEAKUMM WAS A SUCCESS YOU SAVAGES

#VerifySteakUmm has been by the people, for the people
it was for everyone who got told they were too small
that they would never make it
that there was no hope

it was for the underdogs
the oppressed
the little beef

when doubts come creeping in, remember...

Along the way, Steak-umm's relentless campaign angered some, including a surprising number of Twitter users who had been blocked by the company, which now has a following of more 12.7 thousand. For context, when Steak-umm was blasted by Something Awful for creating Social Web/Community Guidelines in 2014, the company had just about 700 followers. They've come a long way.

To celebrate Steak-umm's victory, we present few of their best recent tweets, many of which were submitted by fans who took up the cause along the way.

the photo round earthers don't want you to see pic.twitter.com/2SXDhXhZOt

proud of u today pic.twitter.com/1LklzavARm

@steak_umm I was pondering life today and thought it was appropriate to spend some time thinking about the ancients and how important meat sheets would have been to them. Thus they created MeatHenge. pic.twitter.com/KUS1NnWVP5