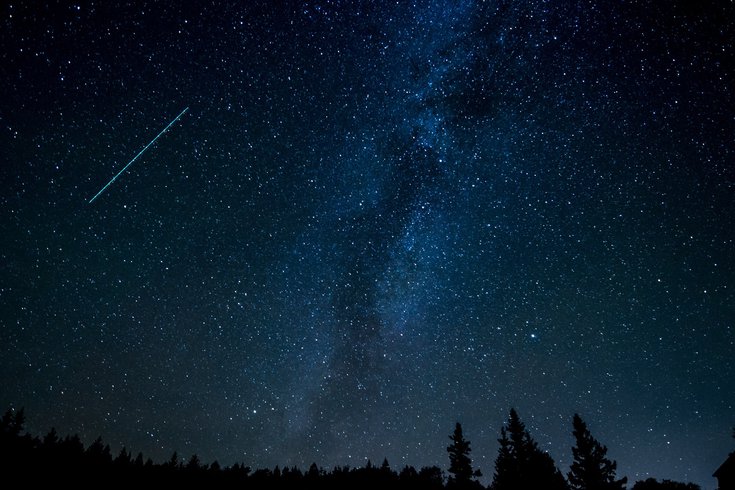 The Perseid meteor shower will bring more than 50 shooting stars per hour when it peaks Tuesday, Aug. 11, 2020.

Stargazers can catch the Perseid meteor shower over the next two nights – though cloudy skies may prevent those in the Philadelphia region from getting the best views.

The annual spectacle is expected to hit its peak late Tuesday night and early Wednesday morning. The meteor shower is the result of the earth passing through debris from Comet Swift-Tuttle.

The Perseid meteor shower, which occurs each August, is considered among the best. The shower has been occurring since July, but has entered its most active point. Shooting stars are expected to fall Tuesday night at a rate of 50 to 75 per hour.

Derrick Pitts, the chief astronomer at the Franklin Institute, is hosting a virtual viewing party at 9 p.m. NASA also is live streaming the meteor shower at 9 p.m.

The best views are expected to occur closer to midnight. City dwellers are encouraged to find an area with less light pollution and face north.

The Perseids' radiance is expected to continue Wednesday night and into early Thursday morning, according to EarthSky.org.

The Perseids received their name because they appear to be falling from the constellation Perseus. The meteors are especially bright, so they may be visible despite having to compete with the moonlight.

Meteor showers occur when Earth passes through the trail of dust left by a comet like Swift-Tuttle. The debris disintegrates as it enters the Earth's atmosphere, prompting a burst of light. Occasionally, the debris remains intact until it hits the ground as smaller meteorites.

Comet Swift-Tuttle was discovered in 1862, though sightings of the Perseid meteors date back thousands of years. It last reached its closest approach to the sun in 1992 and is not expected to return until 2125.