Pew study: What's the most significant historic event in your lifetime? 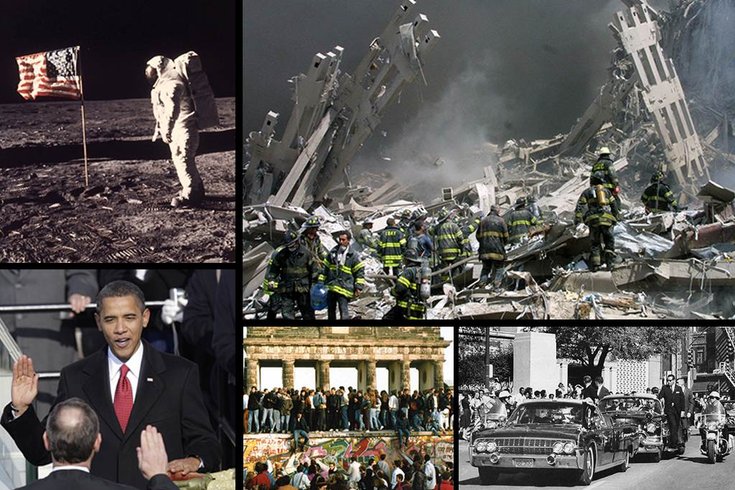 This collage of photos pictures, clockwise from top left, the U.S. landing on the moon in July 1969; the September 11, 2001 terror attack at the World Trade Center in New York CIty; the assassination of President John F. Kennedy in Dallas on Nov. 22, 1963; the fall of the Berlin Wall on November 9, 1989; and the inauguration of Barack Obama, the first African-American president of the United States, on Jan. 20, 2009.

What are the 10 historical events that have had the greatest impact on the United States within your lifetime?

That's the question the Pew Research Center posed to 2,025 respondents in a national survey conducted from June 16 to July 4.

The results, released Thursday, varied by the demographical makeup of the respondent. But the significance of the Sept. 11 attacks spanned nearly every traditional divide, appearing on more than 76 percent of respondents' lists.

The election of Barack Obama as the United States' first black president was the second most popular response, listed by 40 percent of respondents. No other event received as much as 25 percent. 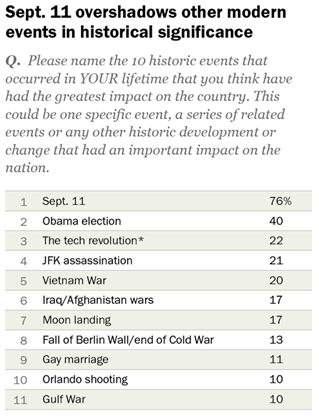 The Pew Research Center found the Sept. 11 attacks overwhelmingly topped the list of the most significant historic events witnessed by current Americans.

"Shared experiences define what it means to be an American," Pew researchers Claudia Deane, Maeve Dugan and Rich Morin wrote in their study. "The Sept. 11, 2001 terrorist attacks were such a unifying event for modern Americans. Nothing else has come close to being as important or as memorable."

Of course, older generations had a broader range of events from which to select. And some events are perceived differently among demographic groups.

Unsurprisingly, some of the greatest differences occurred across age demographics, where the Silent Generation listed six different events than Millennials, including World War II, the Vietnam War and the Korean War.

"Like people, generations have distinctive identities that are linked, in part, to singular events that occurred during their members' formative years," the study concluded. "For the oldest Americans, the Silent and Greatest generations, that unifying event is World War II. These men and women name the Second World War (44 percent) near the top of their list of important events, behind only 9/11 (59 percent)."

Likewise, the assassination of John F. Kennedy, the Vietnam War and the Apollo 11 moon landing appeared prominently on the lists of Baby Boomers. Millennials and Generation X each named Sept. 11 and the Obama election as the two most significant events in their lifetimes.

Eighty-six percent of Millennials listed Sept. 11 as the most significant event in their lifetimes, the highest percent any event received among any generation. 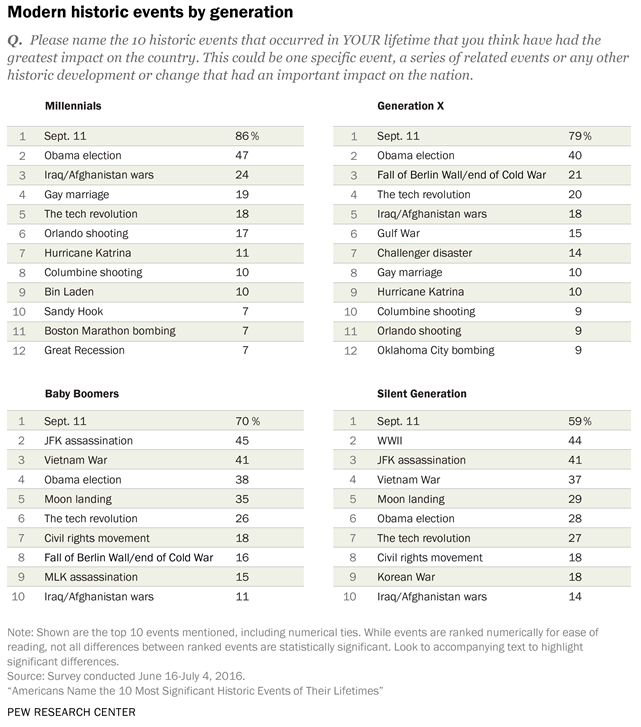 There also were some differences among racial demographics.

For instance, the Sept. 11 attacks easily topped the list for white respondents. But Obama's election virtually shared the top spot among black respondents, who also ranked the Civil Rights Movement and the assassination of Martin Luther King Jr. prominently. Neither event appeared in the top 10 events listed by white or Hispanic respondents.

Similarly, Hispanic respondents listed the Pulse Nightclub shooting in Orlando as the third most significant event, which did not make the top 10 events listed by white or black respondents. 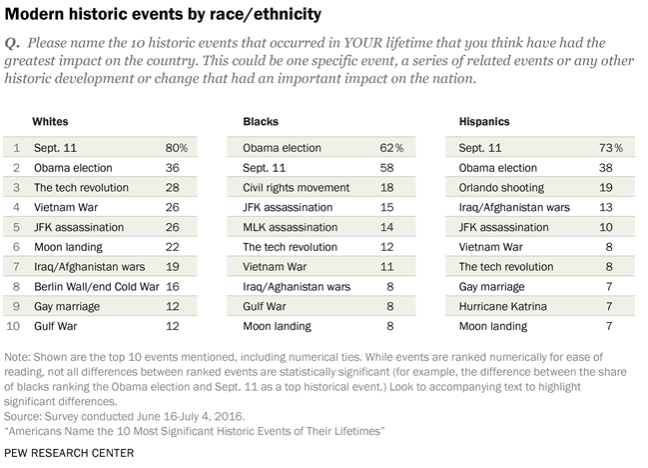 Republicans and Democrats showed more similarities than differences and there appeared to be no significant differences among different genders. Across income and education demographics, the tech revolution appeared significantly higher among college graduates and people making more than $75,000.

These breakdowns and further analysis can be found in the study.

Feel free to list the top 10 historic events from your lifetime in the comment section below or take our reader poll.