Photo by B. Krist / Visit Philadelphia™

One of the most frequently cited deterrents to living in Philadelphia, or any other big city, is the assumed disparity in tax burden that individuals and families will face as an added cost of dwelling in a dense population center. Suburban life, many have concluded, is more favorable to cumulative savings.

New research from the Pew Charitable Trusts suggests this drawback isn't nearly as big as was 15 years ago. The tax gap between Philadelphia and its suburbs has closed by about three full percentage points over that timeframe for middle-income families. Tax burden, for clarification, is defined as the percentage of gross income that the family would owe on the major nonfederal taxes: state and local income taxes, state and local sales taxes, and local property taxes.

As recently as 2012, when Pew first observed and reported on the trend, the average city-suburban tax gap was 1.2 percentage points — or about $750 in taxes per year. That fell to 0.6 percentage points, about $390, in the past three years alone. 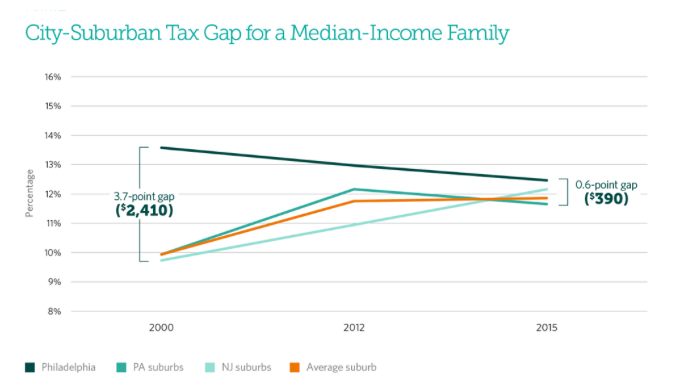 A major contributor to this narrowing gap is Philadelphia's enactment of the homestead relief program in 2013, which offers Real Estate Tax savings to homeowners by reducing the taxable portion of their property assessment by $30,000. The resulting savings is about $415. Without it, the tax gap for Philadelphia would have risen in the past three years. 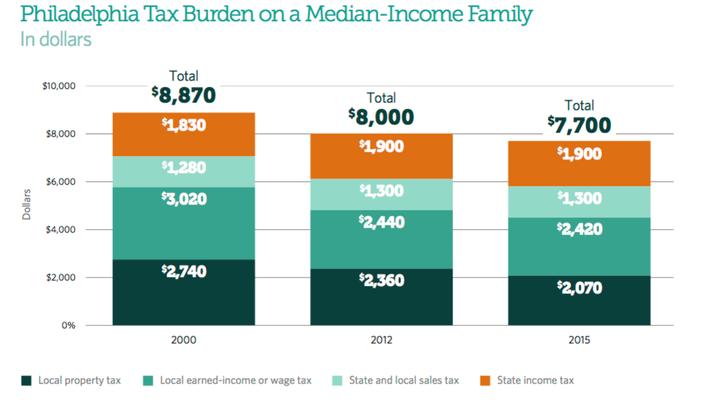 The Pew analysis covered 355 municipalities across nine counties in southeastern Pennsylania and southern New Jersey. Much of the rise in the sururban tax burden came from increases in property value assessments. New Jersey, in particular, has seen a rise in local public-service costs for infrasturcture and schools relative to more modest gains in income.


Among all municipalities included in the study, Philadelphia came in with the 97th highest tax burden. More impressively, the city's tax burdened dropped from third-heaviest in 2000 to 59th-heaviest among in 2015 among the 100 poorest communities in the area, though some have questioned whether the new sweetened-beverage tax will disproportionately affect lower-income Philadelphians.

Compared to the study's wealthier communities that attract higher earners, Philadelphia still had the 10th-heaviest tax burden in 2015.

Some of the reports findings defy popular belief, particularly about commuting. Suburban homeowners who work in Philadelphia saw a 0.5 percentage-point gap ($300) increase to a 1.9-point gap ($1,210) compared to those living in Philadelphia. 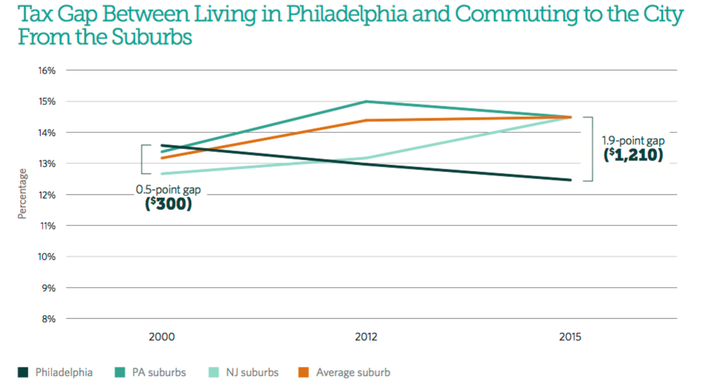 Tax gap between commuting to and living in Philly.

Rising suburban property values — the trickiest factor to account for — and trends in state and local taxes are largely to blame for this turnaround. Other costs of living, however, such as those facing Philadelphia's renters, may offset some of the city's net gains enjoyed by urban homeowners who have gotten a tax advantage.

Further analysis and graphs can be found in the full report from the Pew Charitable Trusts.