He and his wife Dawn Chavous, a political consultant who is also being tried, are facing up to 40 years in prison if they're convicted 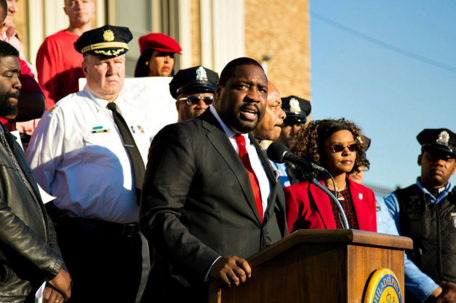 Councilmember Kenyatta Johnson and his wife, political consultant Dawn Chavous, are facing federal fraud and racketeering charges after they were accused of accepting more than $66,000 in bribes.

A member of the Philadelphia City Council accused of taking thousands of dollars in bribes will be headed to court on Monday.

If convicted, they could face up to four decades in prison. They were charged over two years ago, but the trial has been delayed due to the pandemic.

Two executives from the non-profit, Abdur Rahim Islam and Shahied Dawan, are also being tried and are expected to report to court on Monday.

Johnson and Chavous have both maintained their innocence.

If Johnson is convicted, this could be the second time in a year the council has lost a member due to corruption charges. Former Councilman Bobby Henon resigned in January after he was convicted of accepting bribes from powerful union boss John “Johnny Doc” Dougherty.

The charges against Johnson stem from his involvement with properties Universal owned in South Philly.

Prosecutors allege Universal paid Chavous more than $66,000 in consulting fees so Johnson would help them keep control of the Royal Theater on South Street and several lots on Bainbridge Street.

The Preservation Alliance for Greater Philadelphia sold the Royal Theater to Universal in 2000 with the expectation the property would be redeveloped. But that never happened, and in 2013 Universal filed an application with the Philadelphia Historical Commission to demolish the structure and build something from scratch.

Concerned neighbors filed a petition to have the building awarded to another developer through Pennsylvania’s Blighted and Abandoned Properties Conservatorship Law in May of that year. Universal hired Chavous later that month.

While she was still under contract with Universal in 2014, Johnson introduced a spot zoning bill which altered parking requirements and height maximums for the theater. When the bill ultimately passed in December 2014, the neighbors' petition had to be withdrawn.

Johnson introduced the bill just days after Chavous received a $17,000 payment from Universal, which was able to keep the building. The company eventually sold it and made a $2.7 million profit.

The contract stipulated that if the homes weren't built the city could reclaim the lots, and Universal never followed through with the construction.

The city was working to reclaim the land in 2014 when Johnson told officials he didn't support the effort. Prosecutors say this had a chilling effect on the process, in part due to councilmanic prerogative, a city law which gives councilmembers final say over and development in their districts.

The trial is expected to begin with jury selection on Monday. Johnson and Chavous were spotted at a pre-trial victory prayer service at Yesha Ministries in South Philly on Friday.