Concertgoers are advised to use public transportation when traveling to the two-day event this weekend, city officials said

By Pat Ralph
PhillyVoice Staff
Weather Made in America 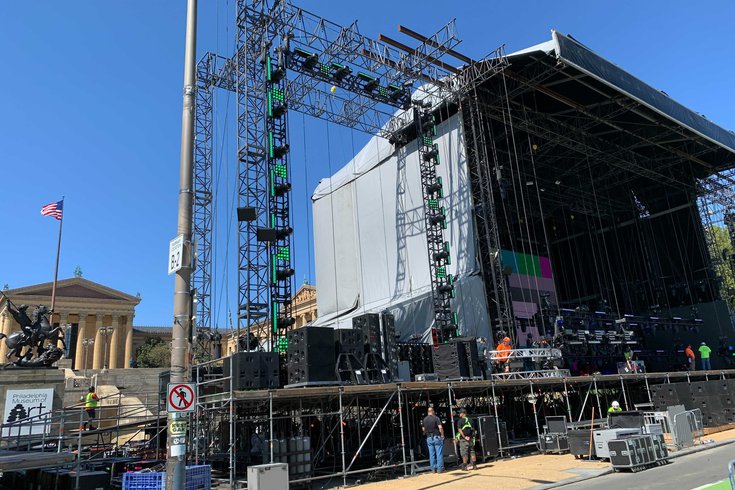 The heavy rainfall brought by Ida Wednesday night did delay some construction on the Made in America stage and concert grounds at Eakins Oval.

Ida may have brought historic levels of flooding to Philadelphia this week, but the damage and destruction caused by the storm will not stop the Made in America festival from going forward this Labor Day weekend.

Mayor Jim Kenney defended the city's decision to allow the two-day concert event to continue as scheduled, saying Friday that the festival is an opportunity for Philly to "have some fun."

"This thing has been planned for an entire year or more," Kenney said. "There have been commitments made. There have been people booked. There have been tickets sold. We can do two things at once, and I think it's good for the city to have this kind of event so we can celebrate a little bit, even in the midst of potential tragedy. Jay-Z, Beyonce, the Biebs is coming. It'll be fun for a change. It'd be nice to have some fun, wouldn't it?"

The heavy rainfall brought by Ida to the region Wednesday night did delay some construction on the stage and concert grounds at Eakins Oval, but city officials said Thursday that construction would finish in time for the festival to begin Saturday.

The event's main stage is located in front of the Philadelphia Museum of Art, not far from where the Schuylkill River overflowed onto the Vine Street Expressway and into the Logan Square neighborhood.

Concertgoers should use public transportation when traveling to Made in America this weekend, city officials said. Most SEPTA service is up and running, but delays should be expected. The Cynwyd and Manayunk/Norristown Regional Rail lines, as well as parts of the Norristown High Speed Line, remain suspended due to the flooding.

The Schuylkill River is now below flood stage as waters have started to recede, city officials said. Roads such as Lincoln Drive and Ridge Avenue have reopened. But the Vine Street Expressway, Kelly Drive and Martin Luther King Jr. Drive remain closed. More roads should be accessible by Saturday afternoon.

City officials said that the river's cresting level is expected to come in at about 16.5 feet, which would put it lower than the 152-year-old record set at 17 feet in 1869. However, this was the most flooding that the city had experienced since the early 1900s, according to city officials.

Despite flood waters beginning to recede, city officials urged residents to stay out of the water. Some Philadelphians have taken to swimming in the flood waters across the city, including one such viral moment of someone doing a backflip into the water at the Vine Street Expressway.

Philly has transitioned into recovery and cleanup mode, a process which city officials said will take months. The city said it has begun to address buildings with infrastructure problems that were caused by the storm.

No storm-related fatalities have been reported in Philadelphia. City officials weren't able to provide an exact number of how many residents had to be evacuated. The city's reception center at West Philadelphia High School remains open for residents who need a place to evacuate to due to the flooding.

City offices remained closed to the public Friday. Only essential services are available.

Trash and recycling collections are continuing as scheduled in areas that were not impacted by flooding. Residents should still set out their materials on their regularly-scheduled day. Delays are expected in areas where roads were impacted by the flooding.