6ABC's Chris Sowers tweeted the photo Sunday, but has since deleted it 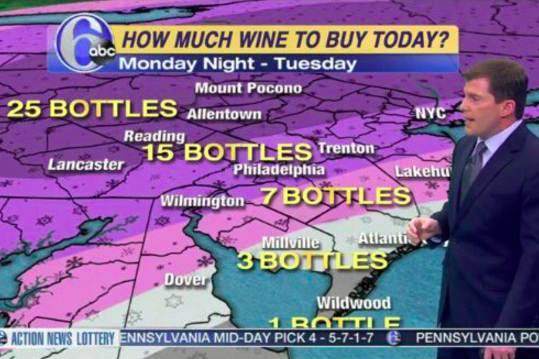 The forecast that replaced snow counts with wine bottles has gone viral.

Were you unsure how much wine you should have picked up in preparation for Tuesday's storm? A Philadelphia meteorologist has a guide for you for next time.

An image of 6ABC meteorologist Chris Sowers, who's been with the station since 2011, giving a "wine forecast" has gone viral, but he said he really had nothing to do with it.

The forecast asks the question, "How much wine to buy today?" with counts ranging from one to 25 bottles in place of where snow accumulation counts should be.

Sowers first posted the picture to his Twitter account Sunday but has since deleted the tweet, according to Newscast Studio, a trade publication that covers all things broadcast news. The image was reportedly sent to him by a viewer.

It didn't take long for the boozy weather report to circulate on the internet.

While he may have deleted the "wine forecast," Sowers did admit – the weather's pretty nasty.

This is my forecast for Tuesday morning! lol pic.twitter.com/kVW09N3bT4

“This is crazy," Sowers told NY Magazine. "Just so everyone knows, this was Photoshopped. I didn’t actually go on the air with a graphic like this. I can’t believe how quickly this is spreading.”