By Daniel Craig and Sharon Lurye 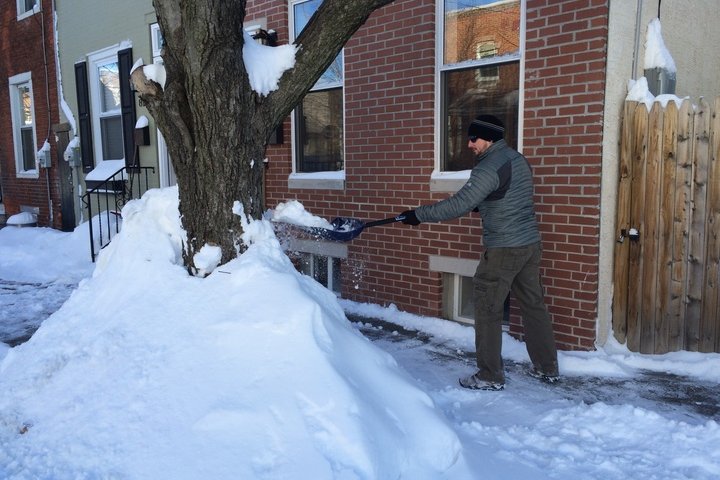 Andy Patrone shovels the sidewalk in front of his house in the Francisville neighborhood of Philadelphia on Sunday, Jan. 24, 2016.

While shoveling his neighbors' front stoops near the corner of Sixth and Thompson streets Sunday morning, Glenn Moy's back was "killing" him.

Moy, 56, said he goes around helping the elderly and others who need a hand – free of charge – after snowstorms like the one that blanketed the region beginning Friday night and most of Saturday, dumping nearly two feet of snow onto Philadelphia.

He usually clears the snow from a nearby church, as well, but said that would be too much to handle Sunday.

"It's rough," Moy said. "It's something else out here. I couldn't even get my car out, I've been walking and doing this.”

Like Moy, residents across the city will be spending hours Sunday – and in some cases even Monday – digging out from the weekend's winter storm.

According to National Weather Service data, 22.4 inches of snow fell at Philadelphia International Airport, (exactly the same amount as the city's average snowfall for an entire season); 26.1 inches were recorded at King of Prussia, Montgomery County; and 22.0 inches in Broomall, Delaware County. 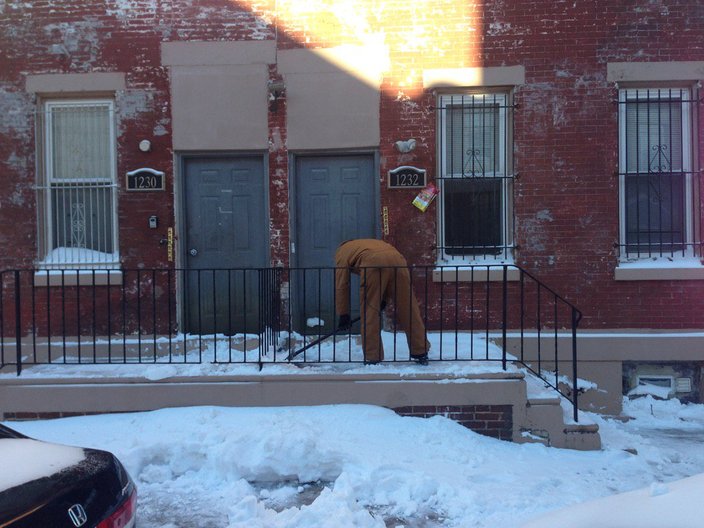 Glenn Moy shovels his neighbor's front stoop near the corner of 6th and Thompson streets in Philadelphia on Sunday, Jan. 24. A winter storm dumped nearly two feet of snow onto the city.

Among the notable totals in New Jersey, there are 20 inches of snow in Gloucester City, Camden County; 23 inches in Hopewell, Mercer County, and 13.4 inches were recorded at Atlantic City International Airport.

Snowfall began to taper off throughout most of the region by 10 p.m. Saturday.

A wind gust of 75 mph was recorded at Dewey Beach in Delaware, the strongest in the region. A 72-mph gust was recorded in Bayville, Ocean County.

The combination of heavy snowfall and strong winds has resulted in whiteout conditions all day Saturday, making travel extremely dangerous. Many roadways remained snow-covered and impassable at nightfall Saturday as road crews struggled to keep up with the wind-driven snow. But Pennsylvania and New Jersey officials reported these conditions were improving Sunday.

Winds and snow also caused electricty outages, but mostly outside the city. A power outage map released by PECO showed fewer than 250 customers in Philadelphia remained without electricity as of 10:45 a.m. Sunday. Likewise, PSE&G did not report a significant number of customers without power in New Jersey.

The state of New Jersey's Board of Public Utilities has published links to outage maps online.

Coastal areas of the Jersey Shore and Delaware beaches experienced flooding from the storm, and the National Weather Service issued a coastal flood warning that remained in effect until noon Sunday.

The flood warning covers Ocean, Burlington, Atlantic and Cape May counties in New Jersey and Kent and Sussex counties in Delaware.

Moderate flooding is anticipated and water levels will decrease in the afternoon as the storm system moves further out to sea.

SEPTA had suspended all of its service except for the Broad Street Line and the Market-Frankford Line, effective 4 a.m. Saturday morning. Officials say operations will remain suspended until at least 10 a.m. Sunday.

The Temple University women's gymnastics team was among hundreds of travelers who got stuck when the Pennsylvania Turnpike turned into a snowy parking lot on Friday night. The Pennsylvania National Guard and local emergency responders from western areas of the state were called to the scene to assist with the enormous traffic jam, and by Saturday night, it was being reported that the team and many of the other motorists had been freed from the gridlock.

Philadelphia's Office of Emergency Management held a press conference Sunday morning during which Mayor Jim Kenney announce the city would be open for business Monday morning.

After days of weather warnings, most of the 80 million people in the storm's path heeded requests to stay home and off the roads, which were largely deserted.

Yet at least 18 deaths were blamed on the weather, resulting from car crashes, shoveling snow and hypothermia. And more snow was to come, with dangerous conditions expected to persist until early Sunday in New York and points north, forecasters warned.

"This is going to be one of those generational events, where your parents talk about how bad it was," Ryan Maue, a meteorologist for WeatherBell Analytics, said from Tallahassee, Florida, which also saw some flakes.

The system was mammoth, dropping snow from the Gulf Coast to New England. By afternoon, areas near Washington had surpassed 30 inches. The heaviest unofficial report was in a rural area of West Virginia, not far from Harper's Ferry, with 40 inches.