The National Weather Service predicts a mixture of freezing rain, sleet and snow through Presidents' Day 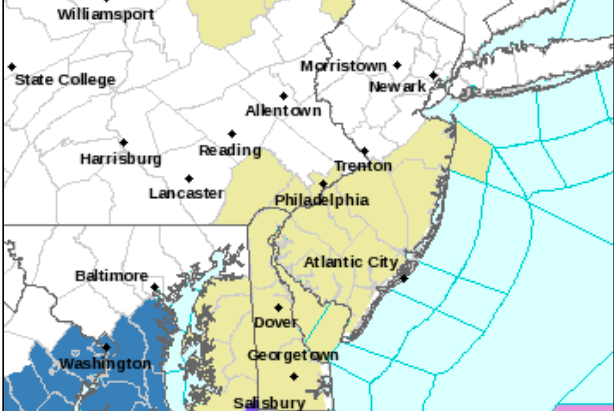 A mixture of sleet and freezing rain are expected to create icy conditions in the Philadelphia region over Valentine's Day weekend.

The Philadelphia region has been blanketed in snow for much of the last two weeks, and more wintery weather is on the way.

The National Weather Service forecasts a mix of snow, sleet, freezing rain and rain will make its way through the region over Valentine's Day weekend. The precipitation could lead to dangerous driving conditions.

The NWS has issued a hazardous weather outlook.

The weather will stay clear through Friday, with temperatures sitting around 30 degrees during the day. Snow and sleet are forecasted to begin Saturday morning and continue at various points until early next week.

Neighborhoods along the I-95 corridor are expected to get the most of this storm, NBC10 reported.

Though freezing rain and sleet may seem less burdensome than snow, icy conditions can be more dangerous than several feet of snow.

Residents should take caution when traveling in the icy conditions and have backup flashlights and candles ready in case the power goes out.

Philadelphia issued a Code Blue advisory, an action taken when the temperature falls near or below 20 degrees. City officials will begin a 24-hour outreach effort to bring homeless people to safe, indoor spaces and emergency housing. Residents can call (215) 232-1984 if they see someone who appears to be sleeping outside in the cold weather.

The NWS advises pet owners to bring animals indoors and to keep them warm and dry during the cold weather.

The worst ice storm that made its way through Philadelphia came in 1994, when an inch of ice covered everything and thousands of residents lost power, NBC10 reported. But the upcoming storm is not forecasted to get that bad.

Though it's still far out, another snowstorm could make its way through the region late next week.

Here's a look at the NWS forecast for the holiday weekend, which also includes Presidents' Day on Monday:

FRIDAY: Cloudy with a high near 30 degrees during the day before cooling to a low of 21 at night.

SATURDAY: High temperature near 30 with a chance of light snow until 4 p.m., when it could turn into a mix of snow and sleet. The chance of precipitation is 40%, little to no snow and sleet accumulation is expected. Sleet overnight will transition to freezing rain. Chance of precipitation is 60%, with some ice accumulation. The low temperature will be around 27.

SUNDAY: Freezing rain and sleet become rain after 11 a.m. Chance of precipitation is 60%. High temperature near 36. At night,  slight chance of rain before 10 p.m., that could become freezing rain later. Low temperature will drop to 27 degrees.

MONDAY: Mostly cloudy with a high of 33. Overnight there is a 60% chance of snow and sleet.

TUESDAY: Possibility of freezing rain before 4 p.m. this is expected to become rain in the evening. High temperature of 34 degrees.