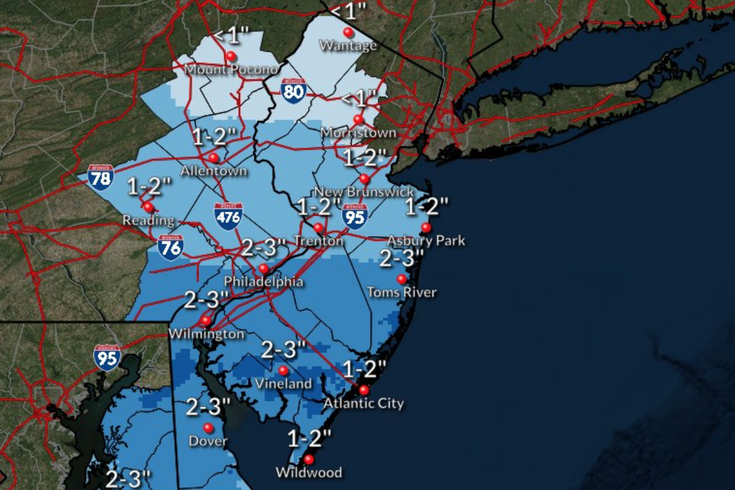 Philadelphia, Chester County, Delaware County and all of South Jersey is expected to see the heaviest snowfall totals on Wednesday night into Thursday.

Punxsutawney Phil might have been on to something when he predicted six more weeks of winter on Groundhog Day last week.

The Philly region is forecasted to receive its third winter storm in the last two weeks, albeit much smaller than the previous two.

Approximately 1-3 inches of snow is expected to fall on Wednesday night into Thursday, according to the National Weather Service. The heaviest snow accumulations are expected in Philadelphia, Chester County, Delaware County and all of South Jersey.

The NWS has issued a Winter Weather Advisory that will take effect at 7 p.m. Wednesday and last until 12 p.m. Thursday.

Temperatures are expected to drop below freezing, and the storm could create slippery road conditions.

More snow, as well as sleet and freezing rain, are possible over the weekend, but accumulation estimates remain unknown at this point.

You all know the drill by this point... more snow is expected this evening through Thurs AM. This time the highest accumulations look to be focused in southern parts of our area for a change. Refer to https://t.co/3RSKJlKkoq for more info

Below is a complete forecast for the region, courtesy of the National Weather Service.

Wednesday: Increasing clouds during the day with a high near 32 degrees. Snow is likely to begin after midnight. 1-3 inches of snow accumulation possible. Chance of precipitation is 70%. Cloudy with a low of around 27 degrees.

Thursday: Snow expected to continue until the early afternoon hours. New snowfall accumulation of less than a half inch possible. Chance of precipitation is 40%. Mostly cloudy with a high of around 33 degrees. Possibility of snow on Thursday night, with less than a half inch of accumulation expected. Chance of precipitation is 40%. Cloudy with a low of around 24 degrees.

Sunday: Freezing rain and sleet could continue until 10 a.m. before turning solely to rain through 1 p.m. Chance of precipitation is 30%. Mostly cloudy with a high of around 37 degrees. Partly cloudy with a low around 18 degrees at night.

Last week's nor'easter dumped as much as 32 inches of snow upon parts of the Philly region, according to the National Weather Service.

The snowstorm that hit the region on Super Bowl Sunday brought as many as 10 additional inches, the NWS said.

The first winter storm of the season came in December, when as many as nine inches of snowfall accumulated in parts of the Philly region.