Phillies among league's worst with runners on base, in scoring position — yet still in playoff position 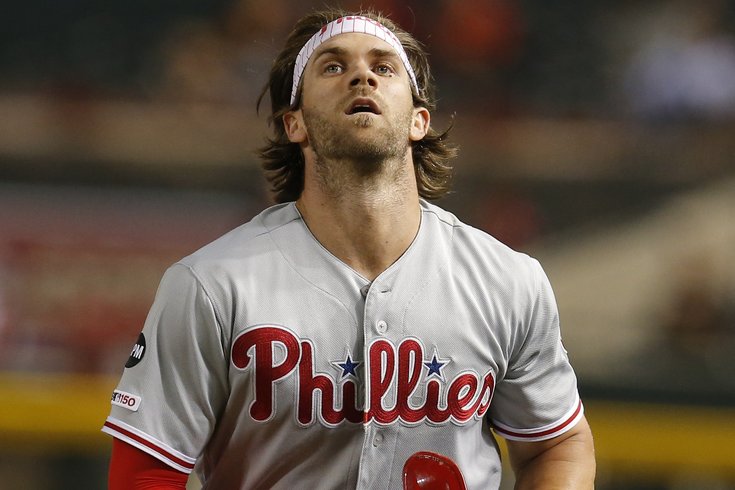 Bryce Harper is one of the bright spots for the Phillies, hitting an impressive .368 with runners in scoring position.

Last night, while you may have been sleeping, the Phillies had 15 hits, had 19 base runners and scored just four runs. They left 12 men on base, and were 2-for-17 with runners in scoring position. The bullpen, again, blew a lead and the Phils lost 8-4.

The Phillies get scoring opportunities. They have runners reach base in .323 percent of at their bats, and have two of the league's leaders in walks in Rhys Hoskins and Bryce Harper.

But for whatever reason, they just can't seem to get timely hits. If the offense has a downfall, this is it.

"I think guys are putting a little extra pressure on themselves trying to get the big hits," Gabe Kapler told media members after the loss. "Sometimes when you're not able to break the game open a couple times in a row, a few games in a row, at times you start to add a little extra pressure on your shoulders and this is a game where it's really important to not try harder in those situations. You have to just breathe and relax."

If Kapler's analysis is apt, the Phillies sure have a lot of relaxing to do.

The Phillies offense was expected to be among the league leaders in 2019. Here's a look at some stat categories they probably didn't plan on being near the top (or bottom) of:

A baseball team doesn't want to be at the top of some of the markings either — as a team like the Padres may be suffering from a lack of chances with RISP or overall base runners. But being at the bottom is not good either.

Even with the little things that don't necessarily show up in the box score — like sacrifice flies with runners in scoring position — the Phillies are dreadful. They have 20, the second fewest in the majors. By contrast, the first-place Astros have 47.

It seems like Kapler knows the little things may be what are lacking as he stresses a more controlled approach at the plate.

"We have to do a better job than we've been doing with runners in scoring position," he said. "One of the ways we can do that is to cut down on our hacks and utilize a 'b swing' to put the ball in play, to have barrel accuracy, instead of trying to drive the ball... there's always the ability to cut down a little bit and try and drive the ball into the outfield."

The two hitters who have had the most at bats with RISP this season, Hoskins and JT Realmuto (who each bat in the heart of the line up) are two of the worst offenders: each is hitting .239.

Speaking of home runs, a trend we examined earlier this season seems to be continuing. Philadelphia has 145 home runs, of which just 57 have come with runners on base. That number is 24th — the Twins have 95 multi-run homers.

Philly has its worst batting average, on base percentage and slugging in the final three innings of games. That paired with their inability to get runners home throughout games makes for a lot of missed opportunities to win.

And somehow, they're still in position to be in the playoffs as the second Wild Card team, if the postseason started today.

While all of the above sounds depressing, it could be a sign of reassurance. Even after losing two of their starting outfielders, more than half their bullpen and sticking with just 60 percent of their opening day starting rotation, the Phillies are very likely postseason bound. If they can just swing things slightly upward in these categories they may be able to put some space between them and the cutthroat competition in the NL.

And it might come down to shortening their swing just a little bit.