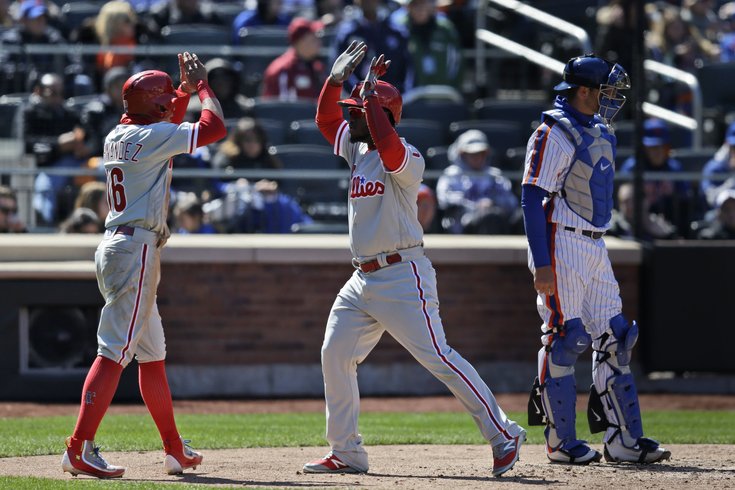 Behind another strong start from righty Jeremy Hellickson and a 2-run home run by Odubel Herrera, the Philadelphia Phillies (2-4) picked up their second win in as many days -- a 5-2 victory over the New York Mets -- and in the process completed their first series win of the young season.

Not only were they able to beat Matt Harvey, who fell to 0-2, at Citi Field on Sunday afternoon, but for the Phillies, it was their first time taking a series from the Mets in New York since May of 2014 (lost their previous eight).

Hellickson, who allowed one unearned run in six innings on Opening Day before the bullpen squandered his effort, scattered three hits and a pair of runs over 5 2/3 inning as the Phils surpassed their Citi Field win total from the entire 2015 season -- they were 1-8 there last year.

Here are some more observations from the game:

•    The good bullpen showed up again. On Saturday, the Phillies shut out the Mets and four Phillies relievers -- Hector Neris, Daniel Stumpf, David Hernandez, and Jeanmar Gomez -- combined for three innings of hitless, scoreless baseball. On Sunday, it was much of the same, as James Russell, Neris and Gomez combined for 3 1/3 scoreless innings, allowing just one hit and (again) no runs.

For the second straight day, it was Gomez (2) picking up the save against the defending National League Champions.

•    The top of the order led the way offensively. The Phillies five runs came on a total of nine hits -- one of which belonged to Hellickson -- and six of those hits belonged to the first four batters in the order. The only other non-pitchers to get a hit on Sunday were Peter Bourjos, who also reached on a walk and scored twice, and Andres Blanco, who knocked Bourjos in with a pinch-hit RBI double.

Ryan Howard, who provided the only offense on Saturday night, finished 0-for-1 with a strikeout, but did walk twice and drive in a run on a sacrifice fly.

•    Jeremy Hellickson didn't pitch deep into the game, but looked good in his 5 2/3 innings of work, allowing just two runs on three hits to go with five strikeouts and a walk. He also got his second hit of the season and is 2-for-4 on the year. In 2015, his first season in the NL, Hellickson his .267 off righties (8-for-30) and knocked in seven runs while striking out just eight times. Not too shabby.

•    Cedric Hunter had another hitless game and saw his average fall to .111 on the season. But he did make his presence felt with this diving grab in the outfield...

Moving Darin Ruf to left field will likely help offensively, but he's not making that catch...

•    Speaking of defense, Howard made a nice diving stop of his own in the seventh inning. I'd embed it, but MLB is still trying to figure out that technology. Watch it here.

The Phillies will play their first home game of the 2016 season on Monday afternoon at Citizens Bank Park against San Diego. It'll be Aaron Nola (0-0) on the hill for the Phillies facing RHP Andrew Cashner (0-1) and the Padres at 3:05 p.m.