Phillies closing in on wild card after impressive series win vs. Cardinals 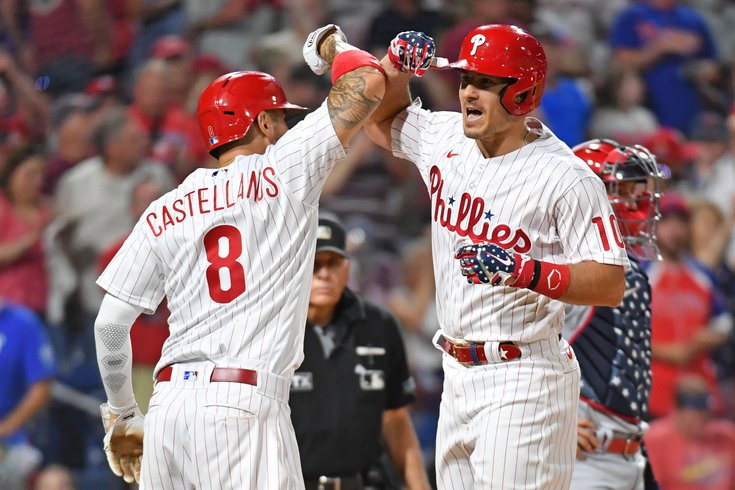 The Phillies won another series this weekend and look to have a lot of fight left, with or without the reigning MVP.

One of the wins against the Cardinals was of the comeback variety, and the team's lone loss came in a game that saw them claw back from a five run deficit and nearly pull off a crazy victory in the middle game of the three-game set. The Bryce Harper-less Phils have shown they can still win games in many different ways, and before we turn the page to their next opponent let's look at a few takeaways from a successful stand against St. Louis.

• The Phillies bullpen — as inconsistent as it has been — proved to be a strength against St. Louis in some key spots and it has to be one of the biggest takeaways for the team moving forward. In the opener Friday, the unit combined for five scoreless innings, taking over with the team trailing by three. The offense did its job and the pen followed suit, as Seranthony Dominguez and Brad Hand combined to slam the door shut to get the win.

In the second game of the set, a solo homer that Dominguez surrendered to Nolan Arenado was the lone bullpen blemish, but unfortunately it was enough to cost Philly the game (more on that wild game later).

And in the finale, Nick Nelson and Corey Knebel (who was back in the ninth inning for the first time in a while — albeit not in a save situation) helped preserve a Zack Wheeler shutout to clinch the 'W.'

• While we're on the subject of pitching, Saturday's performance from Kyle Gibson was record-setting for all the wrong reasons. The starter surrendered back-to-back-to-back-to-back homers, putting Philly in a five-run hole early. Gibson was the Phils best pitcher early in the season but he's since fallen back to earth. After posting a 3.83 ERA over his first 10 starts, he's had a 6.88 ERA in his most recent six. If the Phillies elect to upgrade the starting staff at the trade deadline, it could be Gibson's job in jeopardy.

However, there is a lot up in the air with Zach Eflin working his way back from a knee bruise and Ranger Suarez recently added to the injured list. There may be some rough starts from spot starters (like Bailey Falter) in the near future.

• On the other side of the coin, Wheeler is looking like a surefire All-Star yet again, out-dueling Adam Wainwright in the series finale with seven scoreless innings. After a slow start, he's becoming the reliable ace they need desperately to contend down the stretch.

• Darick Hall made history too, becoming the first Phillies in decades to make his first three major league hits as a big leaguer homers. His third came in the series opener and proved to be the go-ahead run. Hall added a hit on Sunday but alas it was not a home run.

• Somewhat quietly, Matt Vierling is doing the dirty work to help Phillies win games. He was on base five times in the first two games of the series, four of them walks, and he knocked in a pair of runners with sac flys in their loss in Game 2. With Bryce Harper out at least another month (and probably more), it would be nice to see Vierling grow into an everyday role in the outfield, allowing Rob Thomson to be more creative with the DH spot.

• J.T Realmuto hit just his sixth home run of the season Sunday evening, which is a surprising contribution for the backstop who has not resembled the superstar Philadelphia initially re-signed a few years back. He's an innings eater behind the plate but his offense has left a lot to be desired with his slash line lower across the board than any other full season of his career. Having a stud catcher is a rare luxury in the major leagues and the Phillies are still better off than most, but when he is doing it with the bat as well as the glove this team is at its best for sure.

• After a rare Independence Day off, the Phillies will finish their homestand midweek with the Nationals coming to town for a trio of games. Philadelphia is 4-1 on the season against the Nats — who have struggled and have the second worst record in the NL. It's a golden opportunity for the Phillies to keep pace in the wild card before embarking on a fairly challenging road trip.

Next weekend the Phillies will face the Cardinals again, this time in St. Louis, before a pair of games in Toronto and then a three-game series in Miami. It's possible that Eflin, Johan Camargo and Nick Maton could all return from injuries during the upcoming road trip.

• With the series win, the Phillies are just 1.5 games back in the race for the final NL playoff spot.