The team remembered Allen as a 'courageous warrior' against racial intolerance 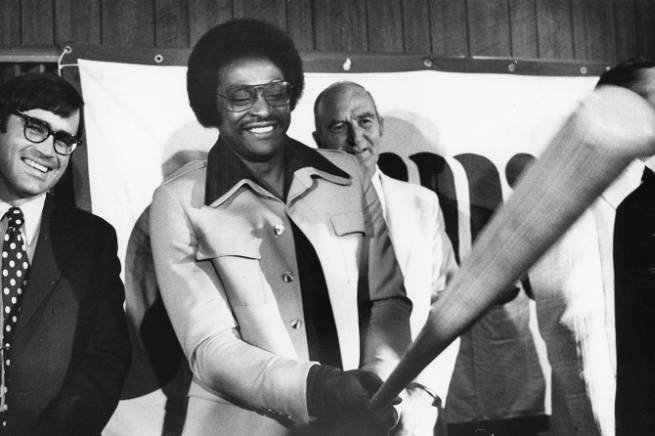 Dick Allen was a member of the Philadelphia Phillies during two separate stints in the 1960's and 1970's. The photo shows his reunion with the team after his signing in 1975. Allen was one of Philadelphia's first Black stars, but endured racial harassment and bullying during his time here. He died on Dec. 7, 2020 at the age of 78.

With sadness in our hearts, we need to share that Dick passed away this afternoon at his home in Wampum pic.twitter.com/BEIrcQlfRG

The circumstances of Allen's death were not immediately known.

"The Phillies are heartbroken over the passing today of our dear friend and co-worker, Dick Allen," the Phillies said in a statement. "Dick will be remembered as not just one of the greatest and most popular players in our franchise's history, but also as a courageous warrior who had to overcome far too many obstacles to reach the level he did. Dick's iconic status will resonate for generations of baseball fans to come as one of the all-time greats to play America's pastime."

Allen, 78, won Rookie of the Year honors for the Phillies in 1964, compiling one of the most impressive first seasons in MLB history with a league-leading 125 runs and 352 bases. He made several All-Star Game appearances with the team during the mid-1960s, before demanding the Phillies trade him ahead of the 1970 season.

Allen's career in Philadelphia — and his career as a whole – was marked by controversy.

As one the first prominent Black stars in the city, he endured racial harassment from both fans and teammates. The mistreatment dated back to his minor league years with the team's Little Rock affiliate, and persisted in Philadelphia's culture of reluctant clubhouse integration.

In July 1965, Allen famously got in a fist fight with teammate Frank Thomas, a white player who wound up getting released after he swung a bat at Allen and struck him in the shoulder. Fans and the local press, who had already resisted Allen's stardom, considered him responsible for costing a white player his job.

The climate in Philadelphia was so hostile toward Allen that he wore his batting helmet when playing in the field to avoid injury from objects thrown at him. It give rise to nickname, "Crash Helmet," that inspired Allen's 1989 biography, "Crash: The Life and Times of Dick Allen."

Allen's career rebounded during an American League MVP season with the Chicago White Sox in 1972. He finished his playing days with a second stint in Philadelphia, including a division-winning campaign in 1976. 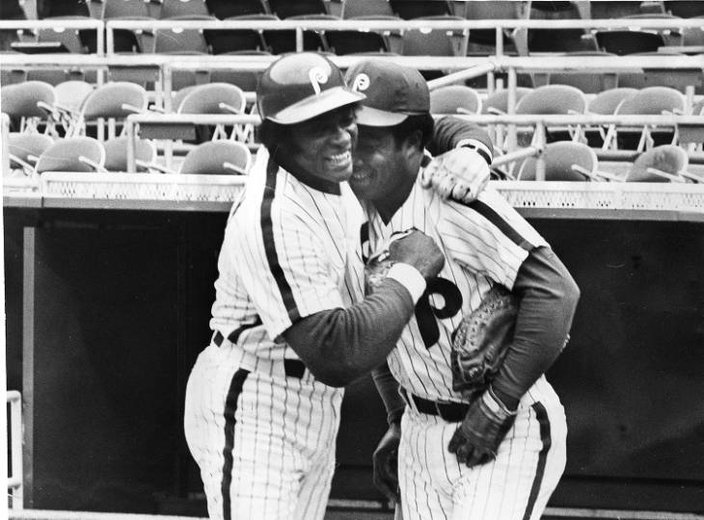 Phillies players Dick Allen (left) and Tony Taylor hug during a workout at Veterans Stadium in 1975.

Even Allen's name was a source of tension, as many in Philadelphia insisted on calling him Richie during his first stint with the team. He felt it was a boy's name and preferred either Dick or Rich.

Allen also was a musician who formed the doo-wop group Rich Allen and The Ebonistics. The group played at Philadelphia nightclubs and once performed during halftime of a 76ers game, transforming a chorus of boos into resounding cheers at The Spectrum. Allen's Groovy Records song "Echoes of November" gained some lasting recognition.

RELATED: Dick Allen becomes seventh Phillie ever to have his number retired by team

Despite what many consider a Hall of Fame-worthy career, Allen has not been inducted into Cooperstown. Phillies great Mike Schmidt, Allen's teammate in the mid-1970s, has been one of the most vocal supporters of his Hall of Fame credentials. He was, however, inducted into the Phillies Wall of Fame and had his number retired this past September during a ceremony at Citizens Bank Park.

In an article published Monday before the news of Allen's death, Deadspin's Chris Baud lamented that Allen never got the opportunity to enjoy enshrinement in the Hall of Fame.

Allen's daughter, Terri, was tragically killed in 1991 when she was fatally shot by her boyfriend in Maryland. Allen is survived by his wife, Willa and two sons.

"He is now reunited with his beloved daughter, Terri," the Phillies' statement continued. "The Phillies extend their condolences to Dick's widow, Willa, his family, friends, and all his fans from coast to coast."

Additional photos of Allen can be viewed at the Temple University Libraries Special Collections Research Center.