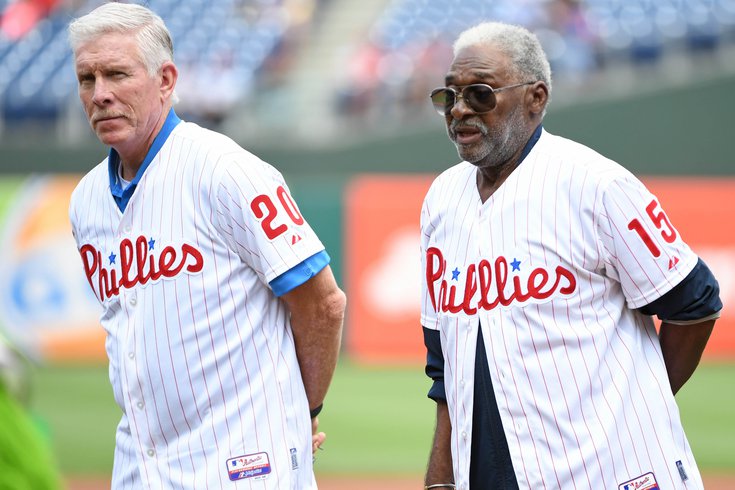 Dick Allen played nine of his 15 major league seasons with the Philadelphia Phillies.

The highest honor a former Philadelphia Phillies’ player can earn within the franchise is to have his number retired. On Thursday afternoon, Dick Allen became the seventh individual to achieve that feat in team history.

Allen’s No. 15 jersey was retired by the Phillies ahead of Thursday afternoon’s game against the Washington Nationals at Citizens Bank Park. The retirement came on the 57th anniversary of Allen’s major league debut with the ball club in 1963.

Allen’s slugging percentage is second-best in Phillies history, and he ranks 10th in home runs too. Allen also led the National League in OPS in back-to-back seasons during his time with the Phillies in 1966 (1.027) and 1967 (.970).

While he could play almost every position on the field, Allen was primarily known as a first and third baseman during his career.

The other six Phillies legends to have their numbers retired by the franchise are Richie Ashburn, Jim Bunning, Mike Schmidt, Steve Carlton, Robin Roberts, and Roy Halladay. Schmidt was in attendance and spoke at Allen’s ceremony on Thursday.

All of their respective numbers can be found above Ashburn Alley. Allen will also now has a replica No. 15 statue in the team’s Wall of Fame plaza, which he was inducted into back in 1994.

A day of goosebumps... Thanks @Phillies ! pic.twitter.com/59KMqWxEsB

However, unlike the aforementioned six, Allen is not a member yet of the Baseball Hall of Fame. Many, including his former teammates and current Phillies’ manager Joe Girardi, believe that Allen belongs in Cooperstown.

“It’s a shame. That’s the one real downfall of this whole celebration of finally getting Dick his due,” former teammate Larry Christenson said to the Inquirer. “Dick deserves the Hall of Fame. He deserves to have his number retired, and he needs to be celebrated in Philadelphia.”

“He’s a Hall of Famer for me,” Girardi said to the Inquirer. “He played in the dead-ball era. He hit 351 home runs. He was rookie of the year and MVP. You know I looked at some of his years, like the year he went to St. Louis and hit 34 home runs and they had one other guy hit 21 — Joe Torre — and then three guys in the teens and nobody hit more than that. So you’re talking about a dead era and you’re talking about a pitcher’s ballpark."

“And I looked something up and from 1964 to 1974, he had a higher wins above replacement than Hank Aaron, Joe Morgan and Carl Yastrzemski, and we all know how good all of those guys are and they are all Hall of Famers and rightfully so," Girardi continued. "But for 10 years, Dick Allen was a pretty dominant player, and to have an OPS in your career over .900, I believe that’s a Hall of Famer."

Allen wasn’t elected into the Baseball Hall of Fame by sportswriters and fell one vote short in 2014 with the former Golden Era Committee. The 16-person Golden Days Era Committee was set to meet this year, but due to the ongoing COVID-19 pandemic, the vote has been postponed until 2021.

The retirement of Allen’s number by the Phillies on Thursday afternoon could be the final push he needs to get elected into Cooperstown next year.

Along with Christenson, former teammates Larry Bowa, Garry Maddox, Cookie Rojas, and Bill White were all at Citizens Bank Park as well for Allen’s celebration.

And some great teammates! pic.twitter.com/Qg09w0T6aD

The team is planning to have a second ceremony honoring Allen when fans are able to return to the ballpark for Phillies games next season.