Andy MacPhail to take over as Phillies president following season 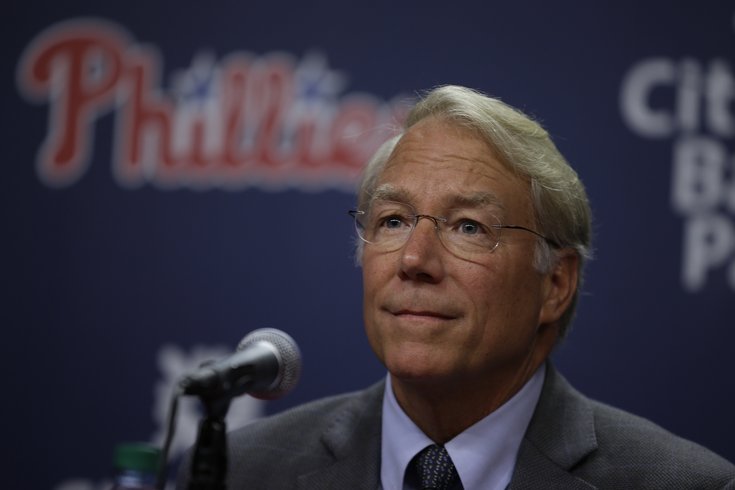 Veteran baseball executive Andy MacPhail will take over as president of the Phillies following the 2015 season.

On Monday, the Phillies announced a big change at the top of the organization, the hiring of longtime baseball executive Andy MacPhail as president of the team.

The move had been expected since CSN Philly's Jim Salisbury first reported the team's interest in MacPhail earlier this month, but what was not expected was news that he will not take over for Pat Gillick, who was serving as interim president, until the season ends in October.

In the meantime, MacPhail serve as a special assistant to Gillick and, according to the team, "will work closely with Gillick and chief operating officer Michael Stiles to become acclimated with the club’s operations and its personnel."

“I am very pleased to join the Phillies. I look forward to helping this organization bring championship-caliber baseball back to Philadelphia. That is what the City and its terrific fans deserve,” said MacPhail.

“Andy brings an uncommon blend of old school experience and new age thinking,” said John Middleton, a Phillies principal owner. “Old school because he has been building winning teams for over three decades. In 1986, Andy was the youngest GM in the history of Major League Baseball when he served in that role for the Twins. The following year, he became the youngest GM to win a World Series title. When the Orioles hired him eight years ago, Andy became the first president of baseball operations in Major League Baseball. During his tenure in Baltimore, he greatly expanded the use of statistical analysis in player evaluations. That’s the new age thinking. These qualities, combined with his positive leadership style, make him the ideal candidate to lead the Phillies organization.”

MacPhail, 62, had been away from the game for three years, most recently serving as president of baseball operations for the Baltimore Orioles from 2007-2011. He previously spent 12 years with the Chicago Cubs as president and CEO (1994-2006), 18 months of which were spent as general manager. MacPhial also won two World Series titles as general manager of the Minnesota Twins.

“I am very pleased to join the Phillies. I look forward to helping this organization bring championship-caliber baseball back to Philadelphia. That is what the City and its terrific fans deserve,” said MacPhail.

So what does this mean for general manager Ruben Amaro, who is in the final year of his contract?

"I think Andy's going to use this period to get to know every area of this company," said Gillick, who noted that the baseball operations side is the most important and also the one that needs the most work.

Gillick went on to say that his role the rest of the season will be to run the day-to-day operations of the team, and that will free up MacPhail to "get to know every area of the club."

"I think it's way, way too premature to talk about personnel decisions," MacPhail said. "I'm not one of those guys who has to know all the people around me. And I don't have the track record that four people get fired as soon as I get hired. But then again, they're case-by-case decisions. Once you figure out the path the team needs to take to get to where you want to be, then you can make sure you have the right guy to do the job."