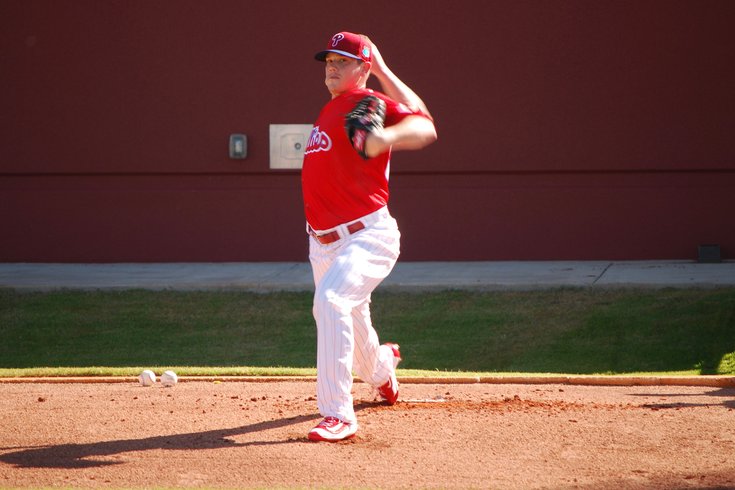 CLEARWATER, Fla. – The Phillies are turning to their pitcher with the most experience pitching in Pinellas County for their revenge game against the University of Tampa.

Manager Pete Mackanin said veteran right-hander Jeremy Hellickson will take the mound for the first exhibition game of the spring on Sunday at Bright House Field. The 28-year-old Hellickson, most likely one of the co-favorites for the Phillies Opening Day assignment with Aaron Nola, will have the task of taming the University of Tampa bats.

Last spring, the Spartans rolled to the 6-2 win over the Phillies in Clearwater. Andrew Amaro, the nephew of former general manager Ruben Amaro Jr. (and an eventual Phillies draft pick), scored two runs in the U of Tampa’s win.

“We think he can handle the pressure” Mackanin deadpanned of Hellickson, who broke in with and pitched five seasons with the Tampa Bay Rays. “We have to beat them."

“We want to win every game,” he said. “We certainly want to beat a college team. But you have to consider that it's very early in camp.”

What’s the logic for choosing Hellickson over, say, a Mark Appel or Jake Thompson?

“I think we’re trying to line pitchers up and he’s probably, perhaps the most ready,” Mackanin said. “We want to stretch our starters out as quickly as possible. … It’s just where we’re at right now.”

Hellickson was acquired in November in a trade with Arizona for pitching prospect Sam McWilliams. Hellickson went 9-12 with a 4.62 ERA in 27 starts with the Diamondbacks in 2015.

Although Mackanin is going with one of his few experienced starting pitchers, he might go a different route with his lineup for Sunday.

“I want to see some of the guys that aren’t going to be here … (or) probably won’t be here,” said Mackanin, knowing that some prospects could fall victim to the first round of cuts with only so much playing time to go around when the Grapefruit League season begins. “I want to see them as quickly as possible because, down the road we’ve got to get our team together and I’m anxious to see some of these guys. I’m anxious to see (J.P.) Crawford, and (Roman) Quinn, and (Nick) Williams and so on and so forth, just to get a look at them because I’ve never seen them play.”

Jerad Eickhoff could throw his first bullpen session of the spring before the weekend and begin the process of catching up with the rest of the pitchers in camp.

Eickhoff suffered a small displaced fracture on the thumb of his throwing hand two weeks ago while taking bunting practice in Clearwater. His work has been limited to pitcher’s fielding practice and playing long toss recently, but Mackanin said the right-hander was “progressing nicely” on Wednesday.

“I think he has a side (session) coming up in the next day or two,” Mackanin said. “He's certainly pushed back a little bit. How far, I don't know. But he seems to think he'll be fine. And we think he'll be ready to go when the season starts.”

While Mackanin has been hesitant to offer too many accolades after watching bullpens or live batting practice sessions, he was impressed after watching former two-time All-Star closer Andrew Bailey throw to hitters on Wednesday, when the majority of the Phillies workout was moved indoors due to rain in Clearwater.

“He threw the ball as well as anybody out there, which is very encouraging,” Mackanin said. “The ball looked good coming out of his hand. It was nice to see.”