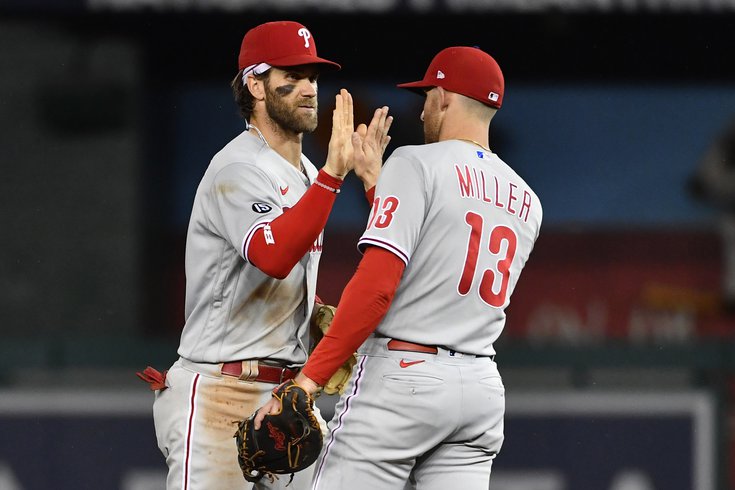 The Phillies have hit .296 as a team over their last seven games.

Exactly one week ago, it looked like the Phillies season was all but over.

Having fallen well out of first in the NL East, their offense was stuck in the mud with teams around them thriving. We actually wrote the following last Wednesday, right here in this space:

It's the Phillies hitters who have fallen asleep on the job, combining to hit .187, lowering their entire season average to .237. In a span that has seen them go 4-9, the Phils have generated 2.8 runs per game. If they had simply scored four measly runs per game in the last 13, they'd have gone 8-5 and would be just a half game behind Atlanta.

Their offense hasn't just been bad, it's been the absolute worst in baseball since August 10th and it really isn't even close:

Well, in the seven games since those numbers were compiled, the offense decided to tell a new story. In the heat of a five-game win streak, Philadelphia has scored 7.3 runs per game. They have pummeled 32 extra base hits and have the best slash line in baseball since August 26. Oh, and that .221 batting average on balls in play? It's improved to .314.

The numbers over the last seven games:

Luck has come to their side, even with key players like Rhys Hoskins added to the IL. Their bats are hot and it couldn't have happened at a better time.

"Its been great, we've gotten contributions everywhere," manager Joe Girardi said Tuesday night following a 12-6 win over the Nationals. "Thats the key, to score in bunches. You get a big night from [Andrew McCutchen], [Matt] Verling has a huge night. [Andrew] Marchan hits a huge 2-run homer to tie the game..."

Don't recognize those last two names? With J.T. Realmuto banged up and Hoskins sidelined and a few regular bench pieces missing, the Phillies rolled the dice with some unproven players and it paid off in a big way.

The hope is that Realmuto (and others) will return to health as the season's final month continues — Hoskins is done for the season. It's a month they enter trailing the Braves by 2.5 games for the NL East crown, and the Reds by the same margin for the second NL Wild Card spot. They now have two paths to the postseason.

According to fivethirtyeight.com, Philly currently holds a 30% chance of closing the gap to make the playoffs. At BetMGM, the Phils are a respectable +155 to win the division with Atlanta at +105.

"It's all you can ask for is a chance," Girardi said. "We have an opportunity in front of us and if you think about some of the things we've been through his month — we managed to keep going. We had a terrible start off to our last road trip. We bounced back in San Diego, then had a tough start to the beginning of the homestand but we bounced back and kept the momentum going."

The Phillies have been gifted by the baseball gods with a very easy September schedule. And after taking five of their last six against the lowly Diamondbacks and Nationals, 21 of their next 24 games come against teams with losing records — all leading up to an end-of-September showdown against Atlanta.

Can they close a 2.5 game gap? It's hard to have confidence in a team that's missed the playoffs for a decade but the ingredients for success are there. All they have to do is beat up on bad teams, and keep the hits coming.