Phillies prospect Kingery has pop, but is he blocked at the major league level? 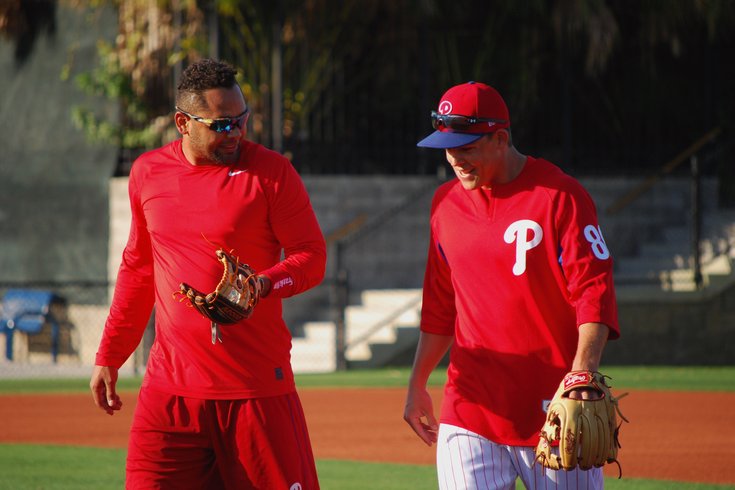 Phillies utility infielder Andres Blanco and top second base prospect Scott Kingery walk off the field after a workout in Clearwater, Fla., this spring.

READING – With two home runs in 10 games during Grapefruit League play this spring, Scott Kingery gave the Phillies organization a little foreshadowing for what was to come when the Eastern League season got underway in 2017.

His power hasn’t just been a pleasant development in his growth as a top prospect, but it’s also been among the best in baseball after two months. Only New York Yankees rookie phenom Aaron Judge has hit more home runs among major and minor league players.

But the other thing that jumped out during Kingery’s somewhat brief time in big league camp this spring was his athleticism and baseball acumen in the field. With a build that brings to mind Hall of Fame Craig Biggio, Kingery was flying all over the left side of the diamond in Clearwater, Fla., diving for balls, making over-the-head catches, and turning double plays with quickness and precision.

“Tremendous,” Reading manager Greg Legg said of Kingery’s defense. “It’s been fun to watch. There really haven’t been any mistakes out there. He’s got the range, turns the double play as quick as anybody, goes to his left, backhands, has the tenacity to knock them all down. Great hands. Quickness. He has that first step – it’s off the charts. He’s been real good.”

But here’s the rub: for all of their faults at the moment, the Phillies have a 27-year-old second baseman who has been their best offensive player in the last year. Over the last 365 days, Cesar Hernandez has slashed .301/.379/.422 with 11 home runs, 10 triples, and 20 stolen bases.

Surely the Phillies can look to see what kind of trade value Hernandez has at some point. Although you could argue trading one of your few proven and productive offensive players makes little sense for a rebuilding team in need of such bats.

Still, the question begs: even if Scott Kingery is best suited to play second base for the long term (evaluators love his defense at second), could he play elsewhere if needed in the short term?

“He’s really good right there, but could he play somewhere else? Sure looks like it,” Reading hitting coach John Mizerock said. “He’s athletic enough.”

Andy Lopez, the former long-time head coach at the University of Arizona, gave a more succinct answer when asked over the phone on Wednesday: “Easy.”

Kingery, the 23-year-old whom the Phillies selected out of the University of Arizona with their second-round pick two summers ago, is showcasing a skill set that might just make him the most well-rounded prospect in the system. The words “five-tool prospect” should be used conservatively with minor league players, but Kingery has displayed startling speed, power, and defense since arriving into the Phils’ farm system.

As a college kid tearing it up at Double-A, Kingery is also closer to the big leagues than many probably realize. But, again, Hernandez is entrenched at his position in Philadelphia.

We asked recently and the answer is encouraging: they have talked about it and are probably planning on it at some point in 2017.

“We don’t want the same thing to happen to happen to him that’s happening to Hoskins,” said one Phillies official, referring to Triple-A first baseman Rhys Hoskins, who is also crushing minor league pitching through the season’s first two months.

Hoskins, like Kingery, happens to play a position that’s been handled more than adequately at the big league level. Tommy Joseph, just a year older than Hoskins, entered Wednesday slashing .302/.378/.616 with seven home runs in 27 games in May and has hit 29 home runs with a .799 OPS in his first 153 big league games overall.

Neither Joseph (a converted catcher) or Hoskins are known for their defense, however. Neither has the athleticism or skill sets to play elsewhere.

Kingery does. He played all three outfield positions in his first two years at the University of Arizona before moving to the infield.

“He played center field for us, and was way more than adequate, he was outstanding, he had all the traits,” said Lopez, who only moved Kingery to second because he thought it was the best position to build the undersized hitter’s draft profile. “The foot speed, the arm strength, the game instincts – all there.”

“That’s not my call,” Legg said of trying Kingery out somewhere other than second base, where he’s played every inning when in the field as a Phillies minor leaguer. “But you have an elite second baseman that could probably play the outfield if he had to, play short. We’ve got a really good player and it’s kind of fun to watch him everyday.” 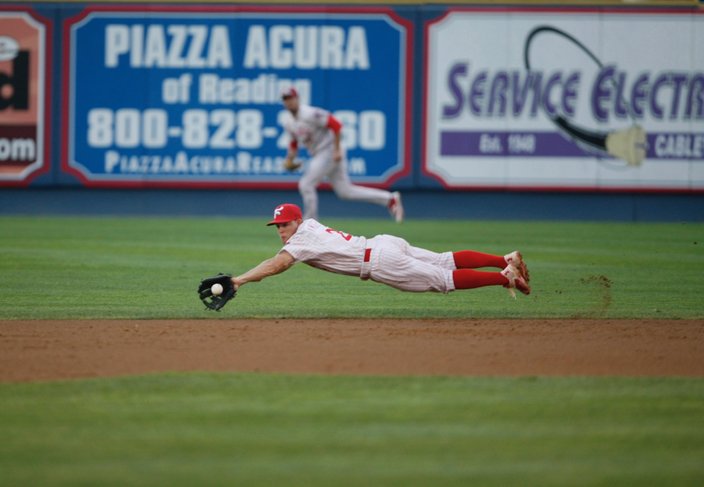 Scott Kingery has played all 2,008 2/3 minor league innings in the field at second base, but the Phillies could look to begin trying him at other spots to increase his versatility for an eventual promotion.

One evaluator even said they believed Kingery’s skill sets as a potential outfielder were superior to Aaron Altherr’s, who many have graded out as the Phillies’ best defensive outfielder in the last two years.

But just because the Phillies could consider playing Kingery elsewhere doesn’t mean they’d think about moving him permanently. They understand the value he brings as a sure-handed second baseman.

Still, plenty of players – Trea Turner, Manny Machado, and even Freddy Galvis come to mind – have broken into the big leagues at a position different than their most natural spot.

Turner, a 2014 first-round pick, played exclusively in the middle infield until late last June, when the Nationals added center field to his workload. Turner only started six games in center at Triple-A before he rejoined Washington last summer, when he regularly handled everyday center field duties.

And now, in 2017, Turner is back at his natural spot as Washington's everyday shortstop.

“I think (second base) is where they want me right now, but I know I have the ability, if I got some more reps at another position – the outfield, at shortstop, or somewhere else – that I could play there as well,” Kingery said. “So, for right now I’m super comfortable at second base. I don’t see why I’d be moving at all. But if I moved, it would be nice to have a little bit of versatility. … It’s good to be able to know as many positions as you can, so in case they (have an opening). Cesar is up there doing great, obviously. If he sticks there, maybe I can hop in somewhere else and get some playing time there.”

Kingery is still at Double-A. A promotion to Triple-A might not even be imminent, let alone a call-up to the big leagues. But perhaps the extra time in Reading could help him diversify his defensive portfolio.

By the way, Kingery, a high school shortstop, said he’s never played third base. Then again, Freddy Galvis never played an inning of his life at second base before making his big league debut there in 2012.

“Without a doubt,” Lopez said when asked about Kingery as a third baseman. “I had Craig Grebeck (who started more than 150 games in the big leagues at second, third and shortstop) and Scott Kingery is better, grades out better with his foot speed.”