The Dog Days of Summer: Man's best friend(s) take in a Phillies game, live to tell about it 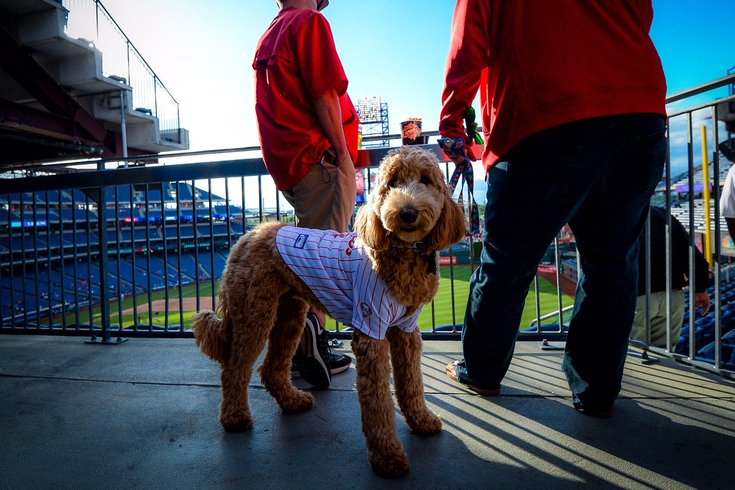 It was Bark at the Park Night at Citizens Bank Park on Friday in South Philly. The dogs were rather vocal about the Phillies' dreadful month of May.

There’s only so much bad baseball anyone can watch, even the most upbeat and fervent of seamheads.

Sometimes, even on the most pleasant of nights at the ballpark, you need to get up, stretch your legs, and take a break from seeing the home team reel off a half-inning of wild, undisciplined swings or play home run derby on the mound for the opposing lineup.

The 9-11 record the Phillies had coming into Friday night’s game at Citizens Bank Park didn’t feel very representative of a lot of the ball being played in South Philly in 2017. Especially not in the last month or when the Mets are in town.

Sitting in the same seat and watching this play out for nine innings every night can make one go bleary eyed and off to see what’s going on outside the press box, and sometimes you wander out into the concourse with the Phillies official team interpreter in tow, and sometimes it just so happens to be Bark at the Park Night, when dog owners are allowed to bring their best friends to the game, because, hey, why not, most dogs enjoy a game of ball.

All bad baseball and no play make beat writers something something.

Back to the dogs. Really.

There appeared to be at least 100 or so pooches just outside the Hall of Fame Club above the first base line on Friday. And since we’re just a bit tired of seeking the opinion of the players and the manager and the general manager and whoever else you can think of as the reeling, last place Phillies charter a trip to Nowheresville this summer, hey …. let’s ask the dogs what they think!

Diego Ettedgui Lacau is a Venezuelan native in his second season on board as the Spanish league interpreter for the Phillies. The man works tirelessly, through all 162 games of the season, following Odubel Herrera (and the like) around to make sure there’s a productive working environment between player and media members alike.

Everybody Loves Diego. Even the dogs, it turns out.

And, guess what? Diego just so happens to be able to interpret dog language, too.

So with the Phillies trailing 5-0 in the sixth inning on Friday, and having mustered all of one hit entering their sixth at-bat of the night, we stumbled out onto the concourse with our trusty pen, notepad, recorder, and friendly interpreter. 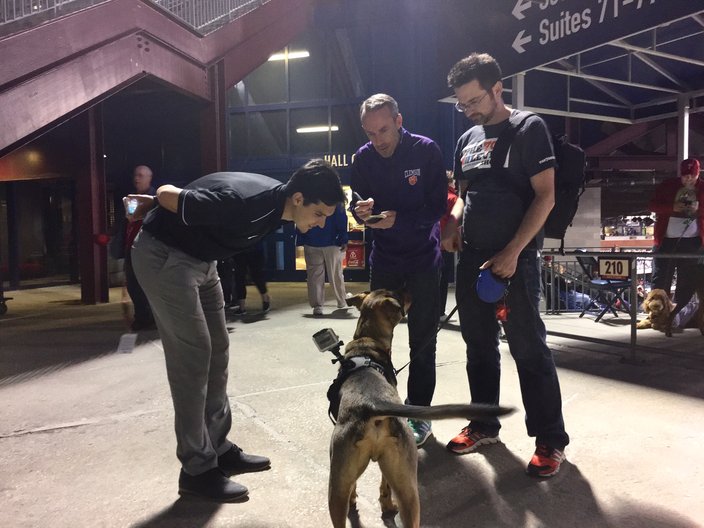 With the help of Diego Ettedgui Lacau, a communications representative and Spanish language interpreter for the Phillies, we found out just what the dogs thought about the Phillies' recent play.

Here’s what happened. We ran into Charlie Talasnik, a 3 1/2-year-old mix rescued from the Delco SPCA who lives in the Washington Square section of the city.

We need your help figuring out what Charlie thinks of the Phillies losing nine of their last 11 games, Diego.

“Odubel should pick it up,” Charlie said through Diego.

Are you concerned of the team’s overall play this homestand?

“I think they have a chance against the Reds – hopefully their starting pitching does better,” Charlie barked.

He did actually bark. It's nice when our four-legged friends play along.

But can the Phillies turn this around before the All-Star break?

We applaud your honesty, Charlie. Onto this little pooch eyeing Charlie up: Penny, a 1 1/2-year-old from Center City.

“I’m a very optimistic dog,” Penny said through our man Diego. “I’m sure things are going to get better very soon.”

Interesting. But Maikel Franco has been kind of difficult to watch lately. Could he benefit from a demotion to Triple-A Lehigh Valley?

“Well, I’ve spent some time at Triple-A last year,” a thoughtful Penny said. “I was a third baseman myself. And it actually helped me when I went down to Triple-A.”

Interesting. Say, you’re an optimist. Do you think the Phillies can make the playoffs next year, Penny? 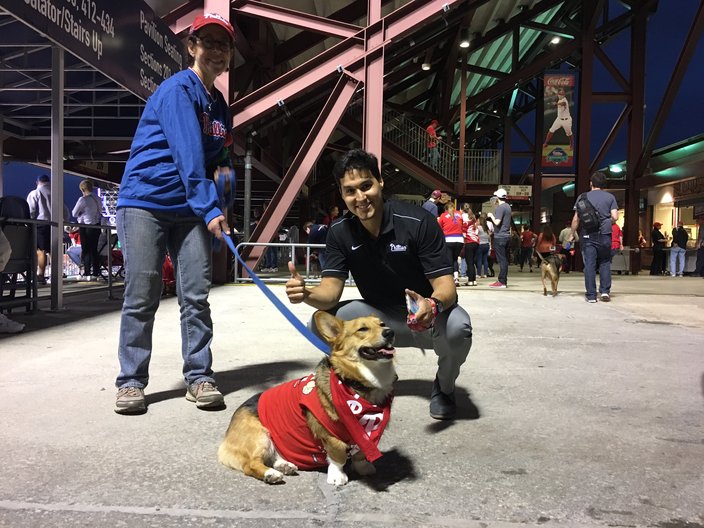 Penny, a Corgi from Center City, chats it up with Diego during the sixth inning of Friday night's game.

Oh no, we freaked poor Penny out. Let’s make a run for it, Diego. There’s a French dog over there named Brie. You’re OK with French-speaking dogs right, Diego?

“I wish they were winning 5-0,” said Brie, a two-year-old Bichon Frise from Bucks County.

I understand. Have you been able to get through entire games lately or are you finding yourself switching the games off halfway through to check out what’s on Animal Planet?

“I usually eat my bowl of food and go to sleep because the games aren’t very exciting right now,” Brie said, sadly.

Yes, yes, I know. Do you at least have a favorite player?

Easy. Perhaps someone who does more than warm up the batting practice pitcher. 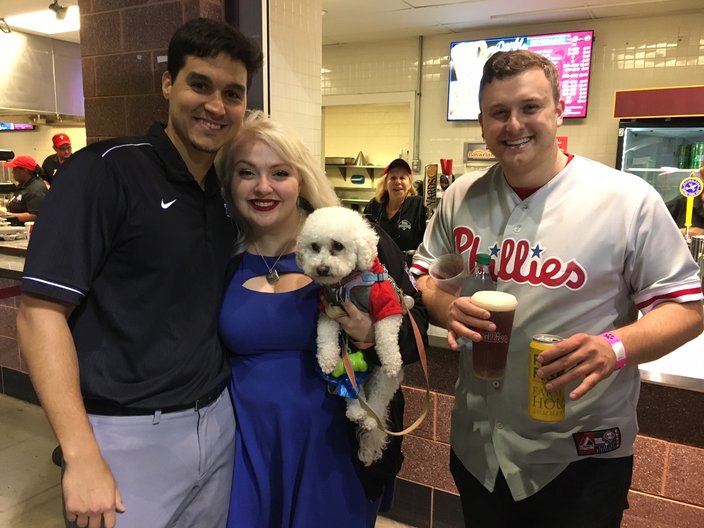 Brie, a Bichon Frise from Bucks County, along with her new friend, Diego, and her family.

Diego and I then ran into a dog named Nola on a night Aaron Nola was pitching. Imagine that.

“He’s my cousin!” the three-year-old from the Roxborough area said.

That doesn’t seem possible, but, sure. So, Nola, how did you have the energy to come to this game tonight given how this month has gone for the Phillies (5-18 in May)?

So, besides your … cousin … who is your favorite player on the team?

“Jerad Eickhoff,” Nola said. “I would say Nola, but I can’t say my cousin. So I’ll go Ike. And Aaron Altherr. He should be an All-Star.”

It turns out the Big Piece’s four-legged fan is a 15-year-old from Hammonton named Caramel Turygan.

“I think they need more veteran players,” Caramel yipped. “I’m 105-years-old, for crying out loud, I would do better than these guys!”

I’m not sure you did the math right, Diego, but I see her point.

The Phillies have just one hit tonight, Caramel.

“I’ve been watching this game for a long, long time,” Caramel said. “They have had good hitters on this team. They should really focus on working with Matt Stairs more often and trying to get themselves together.”

Fair enough. Besides Stairs, a known friend to all dogs, is there anyone in uniform you do approve of, Caramel?

Well OK, I guess it’s not all bad.

Say, Diego, we better get back to the pressbox. We’re here to work, not talk to dogs all night.

Who knows, perhaps the Phillies will muster up a late rally and send everyone, humans and canines alike, happy on an otherwise perfect night at the ballpark.

The Phillies sold out their Bark at the Park night on Friday, with an estimated 300 dogs in attendance at Citizens Bank Park. Part of the ticket package proceeds benefited the Pennsylvania SPCA.

In addition to attending the game with their dog, fans were encouraged to participate in the Save a Pet at the Park promotion, where Phillies’ wives hung out with adoptable animals before and during the game and also accepted donations of pet toys and gently used blankets for the animal shelter.

If you’re still interested in adopting an animal, visit your local shelter, the SPCA, our friends at PhillyPaws, or one of the many other great rescue organizations throughout the Delaware Valley.

Adoptable 🐶🐱🐶🐱 at First Base Gate

It's Bark at the Park! pic.twitter.com/YiOl4scvkk