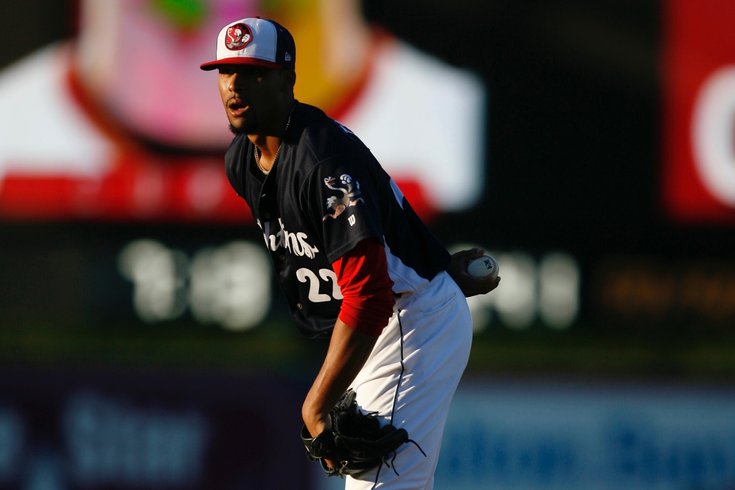 READING – Three years ago, after spending his second professional season pitching in rookie ball in the Gulf Coast League as a 20-year-old, former 17th-round pick Jesen Therrien got an interesting pick-me-up in his hopes of one day pitching in the big leagues.

“I was like, ‘Hell yeah!’” the current Double-A Reading Fightin’ Phils closer said demonstratively on Tuesday afternoon at FirstEnergy Stadium. “It was great.”

Therrien’s agent is friends with the 41-year-old Gagne, who set a major league record by converting 84 consecutive save chances between 2002 and 2004. They also share a high school alma mater: Montreal’s Polyvalente Edouard Montpetit, which also produced big leaguers Russell Martin and Pete LaForest.

The Gagne connection has especially been a meaningful one for Therrien this spring as he’s thrived in the closer role at Reading. The 24-year-old Therrien has converted all seven of his save opportunities and entered play on Tuesday with a 1.35 ERA, 0.638 WHIP, and 35 strikeouts with just three walks in 26 2/3 innings over 20 games.

“His slider is really good – when it’s on and sharp, it’s as good as anybody’s in the league,” Reading manager Greg Legg said.

“The thing I worked on (this winter) was just to try to be consistent, to give my best, 100 percent every time I go on the mound, and to throw one pitch at a time,” Therrien said. “I don’t really look back to what I did or look at my numbers, I just, every time I step on the mound, it’s an opportunity for me to do what I can do and prove myself. … I always had that gamer mentality, to be on the mound and to be aggressive. But to see him and to work out with him, everything he does he gives his best, 100 percent. That’s why he was so good. Because he was like that and he was a gamer.”

Over the most recent winter, Therrien and Gagne’s workouts took on a new angle: both hoped to compete for Canada in the World Baseball Classic. Gagne, who hasn’t pitched in the major leagues since 2008, competed in the tournament while Therrien didn’t make his country’s final roster, only pitching in exhibition games this spring.

Team Canada might want to take a mulligan. Two months after the WBC, Therrien has been one of the top relievers in the prospect-rich Eastern League.

Therrien’s 5.74 baserunners allowed-per-nine innings and his 1.01 walk rate are both the lower among Eastern League relievers. He recently had a 20-inning scoreless streak snapped, a run that included striking out 25 of the 63 batters he faced.

“I think I trust (my slider) a little bit more than in years before,” Therrien said of his success in the first two months of 2017, when he’s held the position to a .159/.187/.205 slash line and struck out 35 of the 93 batters he’s faced. “I have confidence in all four of my pitches. I have a lot of strikeouts this year with my slider so far, but I feel like I’m capable of striking out anybody with any of my four pitches.”

Therrien is among the rising pitchers in the Phillies’ system who could be considered for a bullpen job when one opens up in Philadelphia. Fellow Reading right-hander Yacksel Rios (12.0 strikeout rate), former Paul Owens Award winner Ricardo Pinto (recently converted to a relief role at Triple-A Lehigh Valley), and Therrien are likely in any conversation when the front office is considering homegrown right-handers on the brink of helping out the major league ‘pen.

Therrien can thank the former dominant, goggle-wearing, fellow Canadian closer for instilling him with that uber-confident mindset.