Philly currently has a star problem. At least when it comes to its four major professional sports franchises.

There's some hope for the future in the form of Joel Embiid, Carson Wentz and the other young athletes who have been able, to inject some life into a fan base that has been in desperate need of something, anything to provide some hope.

Unfortunately, those young stars aren't as popular nationally as Philly fans think. And when you expand that sphere globally, well, let's just say they've got a long way to go.

On Tuesday, we got further proof of that when ESPN released its second annual "World Fame 100" list, which is an attempt by ESPN's director of analytics, Ben Alamar, to determine who are the most famous (not necessarily the best) athletes on the planet.

Alamar created a formula that "combines endorsements with social media following and internet search popularity," according to ESPN. And for the second year in a row, the list was without a single Philly athletes.

Last year, the closest was Millville, N.J. native Mike Trout (No. 73 in 2016). Somehow, despite winning his second AL MVP last season, he has been bumped entirely from this list.

In fact, there weren't any baseball or hockey players at all on this list, which is more of a statement about the health of those two sports as a whole rather than any one single player. Especially when you consider golf and tennis combined to make up 21 percent of the athletes.

With that being said, here's a look at the Top 10:

And as far as which sports were the most popular (No. 1 shouldn't be much of a surprise), here's a nice breakdown from ESPN: 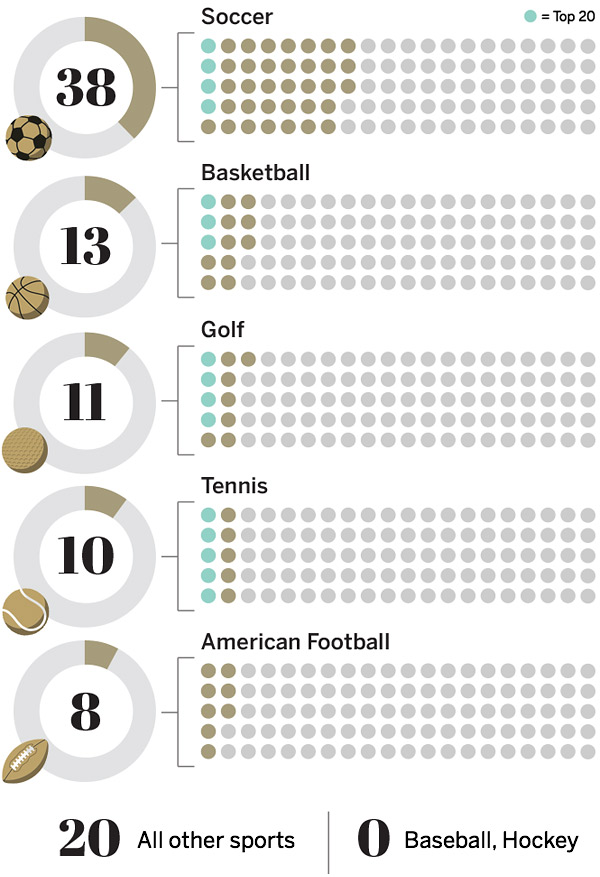 It's interesting that both golf and tennis had more than football, which we consider to be the most popular sport in America. Furthermore, those two sports (golf and tennis) accounted for nearly half of all the athletes in the Top 20, more than all five major team sports combined (soccer, football, basketball, hockey, and baseball).

Here's a little more on how they came up with the list:

We started with Forbes' annual list of the highest-paid athletes and expanded the pool from there using a variety of domestic and international sources to make sure we didn't overlook any legitimate candidates. (You can find the 2016 World Fame 100 here.) We also sought input from ESPN journalists around the world, including colleagues in our bureaus in Australia, South Africa, Argentina, Brazil, China, India, Mexico and the United Kingdom.

The data for each athlete in the pool was then fed into a formula created by ESPN director of sports analytics Ben Alamar that weighs athletes' endorsements, their following on the social media Big Three (Facebook, Twitter and Instagram) and Google search popularity, producing a comparative ranking system. The analysis includes five categories: endorsement money, Twitter followers, Instagram followers, Facebook followers and Google Trends score. For special situations (esports and China) we used two additional categories: other social media -- for when the athlete was more relevant on a platform outside the Big Three (Twitch, for example, although no gamers made the top 100) -- and, in China's case, Baidu search score, because Google is blocked there.  [espn.com]