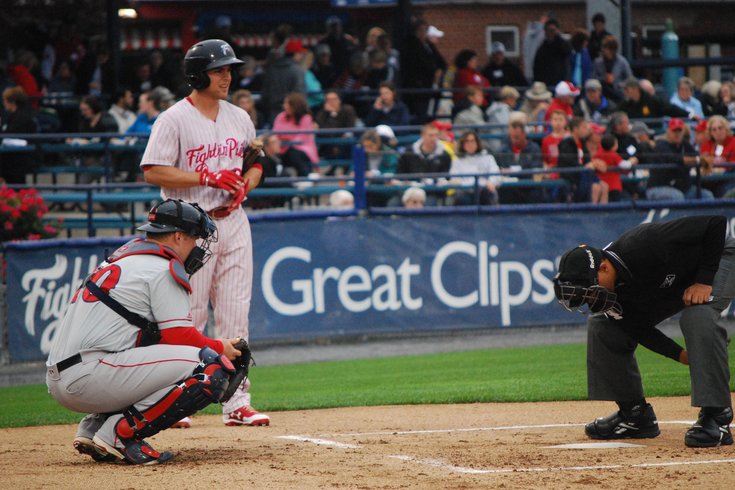 READING – Hours before the game, in between his regular routine of taking batting practice with his teammates, Scott Kingery sneaked behind the batting cage.

The Jimmy Rollins-sized infielder quickly and methodically received the ball from the pitching machine with his bat and laid down a series of bunts. The fleet-footed Kingery, the Phillies second round pick in 2015, already has more than a half-dozen bunt base hits in 2017 at Double-A Reading.

But he also entered play on Tuesday night with the following distinction: across all of baseball, in the affiliated leagues in the minors and majors, only one batter has hit more home runs than Kingery: Yankees superstar rookie slugger Aaron Judge.

Judge entered Tuesday with 17 home runs. Kingery has hit a minor league-best 16 through his first 45 game sin 2017 with the Reading Fightin’ Phils.

“I texted him this morning and said, ‘Hey, take it easy – let me catch you,’” Kingery laughed on Tuesday afternoon.

You can laugh with him but don't laugh at him. Kingery has hit nine home runs in his last 16 games.

Kingery and Judge are two years apart in age, but are both west coasters who happened to train together in Arizona this offseason. And they are both represented by the same agency.

So clearly Kingery’s jump in power – he hit 13 in his first 328 minor league games – is a credit to jumping onto Judge’s offseason program and trying to out-eat the Giancarlo Stanton-sized Yankees rookie, right?

“That’s probably not going to happen,” Kingery said with a laugh.

But the rising Phillies’ second base prospect – No.6 on the latest PhillyVoice Prospect Power Rankings – did change his offseason program this winter. He came into his first major league camp three months ago at 187 pounds, a more-than-modest jump from the 172 he finished at last season.

“I did a ton of strength training and just tried to put on as much weight as I could, based off how my body broke down toward the end of last year,” said Kingery, who entered Tuesday slashing .313/.391/.676 with 16 home runs, 10 doubles, four triples and 12 stolen bases in 45 games. “I realized how long a season actually was and how much damage it can do to your body. So I focused on putting on some extra weight so I could stay at a comfortable playing weight during the season and throughout the whole season.”

He hit the weight room regularly but also improved his dieting habits, focusing on a lot of poultry and fish. And, of course, he worked on his swing, too.

Scott Kingery taking BP at @ReadingFightins. He has 16 HR. Only one player in organized baseball has more HR: Aaron Judge. pic.twitter.com/GtUh38yMjq

“I was pretty much straight up and straight down (but) lunging forward at ball, changing my eye level,” he said. “That would make me swing at pitches that were bouncing in the dirt. Being able to stay on my back leg, I’m recognizing pitches and if it’s in the dirt I can take it and wait for that pitch I can hit.”

While some people might look at Kingery’s power numbers and roll their eyes as they consider Reading’s hitter-friendly ballpark, FirstEnergy Stadium, those people would be mostly wrong: he had eight home runs in 82 at-bats at home and also eight home runs in 100 at-bats on the road entering Tuesday.

“Well, last year in Clearwater I had him and he hit a lot of doubles, I want to say he led the league in doubles,” said first-year Reading manager Greg Legg.

Legg is correct: even through Kingery spent the final six weeks with Reading in the Eastern League, Kingery did tie for the Florida State League lead with 29 doubles in 94 games with Class A Clearwater last season.

“I think his offseason program had a lot to do with the home runs he’s hit,” Legg continued. “Obviously the ballpark here you think is smaller, but we’re going to Trenton and going to New Hampshire and he’s hitting them there off the deck. They are home runs everywhere, really. Maybe only three or four weren’t. I have to tip my cap to his offseason program and his work ethic and staying in there. He’s not trying to hit them, he’s just strong and quick. He gets leverage on the ball, gets the angle and, I have to tip my cap.”

Legg tips his cap while Kingery fires off another text to Judge. Watch your back, big guy.