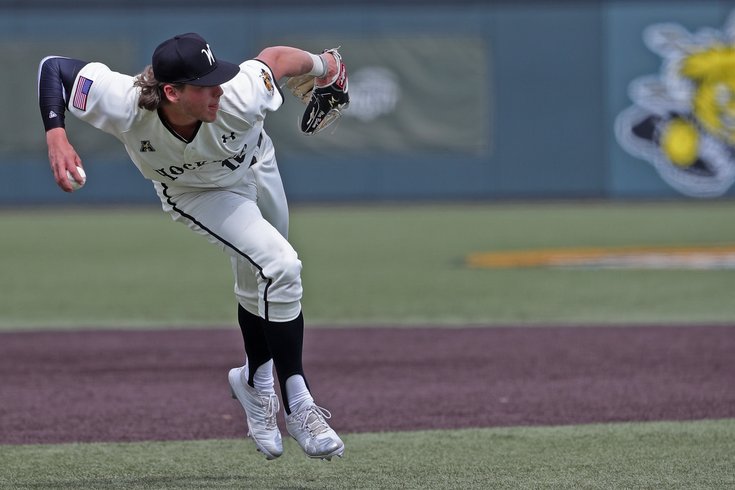 Alec Bohm had a little trouble buttoning his new Phillies’ jersey after being announced as the Phillies’ first-round draft pick, and third overall, in the Major League Baseball Draft Monday night. The towering 6-foot-5, 220-pound third baseman out of Wichita State was understandably nervous.

It’s been a whirlwind trip in just three years, going from Omaha Roncalli High School in Nebraska, where he was only recruited by one school, to being the third-overall selection in the 2018 MLB Draft.

This season, in 224 at-bats over 57 games, the rangy Bohm hit .339, with 16 home runs and 14 doubles. He’s shown great plate discipline, striking out 28 times while walking 39 times. That's the type of plate discipline the current Phillies could use, considering that they’re fourth in the majors in strikeouts (552) behind league-leading Texas (603).

What set Bohm apart was his performance in the Cape Cod Summer League during the summer between his sophomore and junior years at Wichita State. He was named an all-star for the Falmouth (Mass.) Commodores, finishing second in batting average (.351), third in RBI (28), third in doubles (10) and 10th in home runs (5).

More importantly, he struck out just 21 times over 154 at-bats in 39 games. And that played a big role in the Phillies' decision to use the third pick on Bohm.

I personally believe that [Bohm's] the type of hitter that plays at this level for a lot of years. He’s a college kid who can advance pretty quickly through the system.

“He can really hit. If you guys go and look at his Cape numbers they were phenomenal. He’s got a lot of leverage in that swing, he can drive the ball out to all parts of the field. He’s got what I call wide-field power meaning that he can hit home runs from gap to gap.”

Almaraz likes how athletic Bohm is and believes he can be “a good third baseman with some instruction" and has a chance to be "chance to be an average to an above average third baseman at the major league level." If not, Almaraz also said Bohm could make a move to the outfield at some point, or even first base.

“If you go and look at Alec Bohm, he’s [been] a very low-strikeout, high-walk-rate hitter throughout his career and that’s what we look for,” Almaraz added. “I personally believe that that’s the type of hitter that plays at this level for a lot of years.

“He’s a college kid who can advance pretty quickly through the system.”