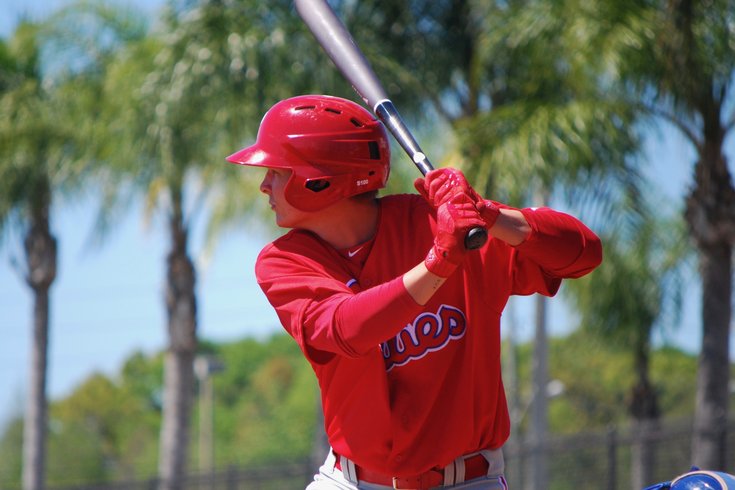 The MLB Draft (and it's 40 rounds) kick off Monday evening at 6 (on MLBNetwork), and getting things right in the first round has rarely been as important to the Philadelphia Phillies as it is in 2018.

MLB rules currently do not allow for trading of picks, so a complicated compensation system is the only means for teams to accumulate more than their regular share of draft selections. Which is why the Cubs have five picks in the first three rounds while the Phillies have just one.

They pick third overall thanks to their 96 losses last season, and will be selecting third in every round from four through 40 during the three-day event. But they do not have any picks between the third and 107th picks.

According to MLB.com, the Phillies have been the best team over the last 21 years with regard to maximizing their first round picks. The Phillies have had the best return in WAR from first rounders than any other team in their 15 first rounders during the time considered. Their recent success really coalesces with the 2008 World Series championship team and the years of NL East titles surrounding it. Their picks since 1996 can be broken down into three eras:

Starting in 1996 with Adam Eaton, a pitcher who was on the roster for the '08 championship, the Phils really had an unprecedented string of essential first round draft picks that led to them winning a title.

As you will see, the fact that Philly had a positive WAR — in some cases at a borderline Hall-of-Fame level (Utley ranks 136th All-Time in wins above replacement, better than more than 50 Hall of Famers. Hamels is 243rd, still above several Cooperstown players) — is a remarkable nod to the competency of the Phillies front office ahead of their five consecutive NL East titles.

The next eight years wouldn't be nearly as impressive.

The era of contending

From 2003-2012, the Phillies were one of the best teams in the National League, with first round picks like Utley, Hamels and Burrell teaming up with later round steals like Jimmy Rollins and Ryan Howard to create a juggernaut. But the Phillies fell off a cliff after their 101 win season in 2011, much of it due to the fact that the team couldn't continue drafting well.

Just one of the Phillies' picks from 2004-through-2010 has a positive WAR, and that player is Jesse Biddle — a reliever who has cracked the majors for the first time with the Braves this season. Why are the Phillies picks so weak? Well they picked four high schoolers, picks that have a lot more at risk. They also had fewer chances, as they surrendered first rounders in 2003, 2005, 2009 and from 2011-13 due to their signings of big name free agents (like Cliff Lee, Hunter Pence and others) during that era.

Ruben Amaro Jr., the GM ultimately responsible for many of these selections would be let go in 2015 bringing on the current era in Phillies baseball.

The jury is still obviously out on the Phillies most recent five first round picks with two of them currently in the majors and three working their way through the minor league ranks. With the current iteration of the Phils looking poised to contend, the days of picking in the top 10 are likely in the rearview. Thus giving them one last chance to cash in on a very high pick in Monday's draft.

Here's a look at the recent picks: