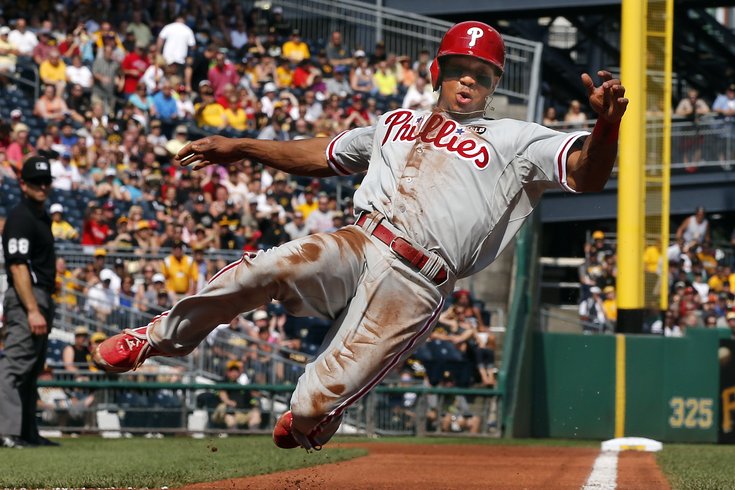 Even during his Friday afternoon presser, Phillies general manager couldn't stay off his phone.

And shortly after, Todd Zolecki of MLB.com, got to the bottom of what the GM was up to, reporting that outfielder Ben Revere is headed to the Toronto Blue Jays. Shortly after, Revere confirmed to reporters in the clubhouse that he had indeed been traded.

"It’s been a fun ride," the 27-year-old outfielder said. "It’s been a great ride, playing for the Philadelphia Phillies. I know I’ve had my up and downs for the past 3 seasons, but I think it’s been great. The fans, the coaches, my teammates - everybody. People I’ve met here, around the community. It’s been great here. They’ve been treating me and my family well. It was a blessing to be a part of this organization."

Revere also acknowledged that he understood the business side of the deal, as well as the fact that his new team is in a slightly different position, standings-wise, than the one he is leaving.

"It's a business. That's the business side," he said. "Everybody is sad to see me go but it's also happy that I'm going to a team that could be contending for a playoff spot. That's what you're trying to do. You play this game to win and I'm trying to win a championship and that's what I'm going to try to do when I go there."

He also said he gets why a team like the Phillies needed to make a deal like this.

"I know everbody, especially fans, have been frustrated," Revere said of the current state of the team. "But it's a rebuilding phase. Of course, I know Phillies fans don't want to hear that. But we've got some young guys in here that are going to be great Major League ballplayers in a couple of years. And just working with them trying to help them be better players just like when I was a rookie where they are when guys helped me become a better player.

In this case, those young players -- the ones sent back to the Phillies, according to CSN's Jim Salisbury -- are a pair of right-handed pitching prospects -- Jimmy Cordero and Alberto Tirado.

Scout friend on 2 arms Phillies got from Toronto. "both legit arms. Both throw EZ 95. Need to figure it out, but legit arms."

Tirado, the better of two newest Phillies, is also a relief pitcher and is 4-3 with a 3.23 ERA this year in 31 games with Toronto's high-A affiliate, the Dunedin Blue Jays. The 20-year-old was ranked the No. 76 prospect by Baseball Prospectus prior to the 2015 season. Here's what FanGraphs wrote about Tirado prior to the 2015 season:

Tirado signed for $300,000 in 2011 out of the Dominican and has progressed into an intriguing power arm. The 6’0/180 righty has effort to his delivery that leads to command inconsistency and those two things make most scouts project him in the bullpen. If that’s the case, Tirado has plenty of stuff to profile in the back end of the pen: he sits 93-95 and hits 98 mph with life and a wipeout, easy plus slider. The changeup flashes average but is far behind the other two pitches. The fastball command is the next hurdle for Tirado to clear and if he can conquer that, then he’s still got a chance to work into a starting role. He just turned 20 and will get another shot at Low-A in 2015.  [fangraphs.com]

Revere, who came to the Phillies in 2013 from the Twins in exchange for pitchers Vance Worley and Trevor May, is batting .298 and has 24 steals to go along with six triples, which is second-most in the National League. In his two and a half seasons in Philadelphia, he hit .303 and was tied for the most hits (184) in the NL last year.

His .303 average is tied with Bobby Abreu and Jay Johnston for fifth-best among Phillies players since 1947 (minimum 1,000 plate appearances).

He appeared in 335 games for the Phillies and until this season -- when he played all three spots -- was mainly a centerfielder. He has also hit in seven* of nine spots in the order.

*3rd and 4th are the exceptions.

With the Blue Jays, who also acquired shortstop Troy Tulowitzki and David Price, Revere is looking forward to competing, whatever his role in the lineup winds up being.

"I see guys go from last place teams to potentially winning a World Series in the same year, or go to a team that goes into the playoffs," he said. "That’s what I’m going to try to do. Be a part of a group of guys. I’m not going to try to do too much. Trying to win. That’s all I’m trying to do. Doesn’t matter if it’s a wild card spot or if we go all the way. I’m just trying my best to help the team win."

"I ain’t trying to go in there and cause any havocs in the clubhouse or anything," he added. "Whatever they want me to do, I’m going to do. I can come off the bench and pinch run, play defense. Or even if I do start, I’m just going to play my game."

Here's a closer look at some of his stats with the Phillies:

In the field, what he lacked in arm strength he was able to make up for with plays like this: