Phillies' ability to bounce back after loss will be key

Because they haven't done it much so far... 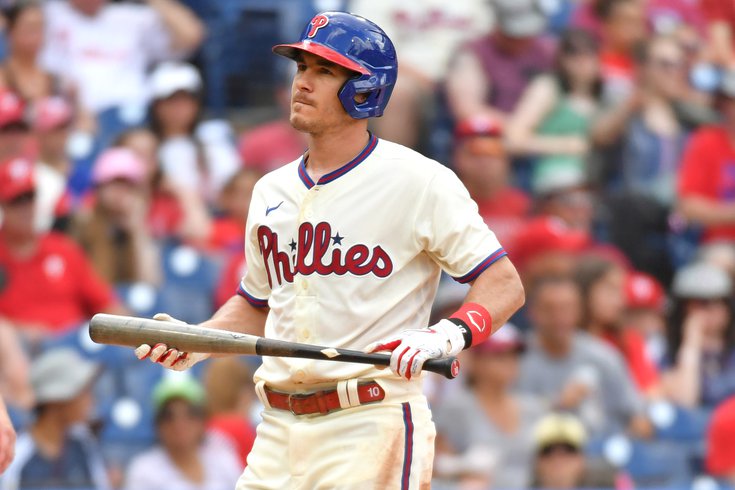 The Phillies need to have short memories this week.

The Phillies lost for the first time in June on Sunday afternoon. But it's no big deal. All winning streaks (this one was nine games) come to an end.

Despite the ugly effort, a 13-1 dismantling by the Diamondbacks, there is no reason to worry. Losses happen, and the Phillies were certainly due for a stinker.

Just ask Kyle Schwarber, who knows more about winning than anyone on the Phillies roster.

“Look, It’s one game, right?,” Schwarber said (via MLB.com). " There’s a lot more games to go. Obviously, we didn’t play the sharpest today. That’s what you can chalk it up to. We didn’t play our sharpest. We won the series. There’s things that you take away, you learn from and you move on. But there’s still a lot of positives in what we’ve been doing. And I think that’s going to be the biggest takeaway — it’s the positive stuff from what we’ve been doing here the last 11 days. It’s playing really solid baseball.”

Will the solid baseball continue? Or will be prove to be elusive as it has been in games following losses so far this season?

There could be reason to worry if the Phils lose to the Marlins Monday night in South Philly. Despite sporting a 30-30 record so far this season, the Phillies are 10-17 in a game immediately following a loss. Of those instances, the Phillies have managed to avoid a losing streak (two losses or more in a row) only three times this season.

Upon further examination of these losses, it appears that it's not the bats, but the pitching staff that has dropped the ball. In the games the Phillies have played following a loss, they have averaged 4.3 runs per game, pretty statistically close to the 4.8 they average overall. The pitching staff has allowed four or more runs in those 27 such instances 17 times. In their 33 other games this year they've allowed that many runs 15 times.

In a season just two and a half months old, the Phillies have suffered losing streaks of three or more games thrice,  the same number of times they have won three or more.

With a new manager and seemingly a new lease on life, will the Phillies react differently after their first loss of the Rob Thomson era?

“At the end of the day, we won the series,” Thomson told reporters. “We have to move to tomorrow. That’s the message to the guys. Just move forward. We’ve got a new series coming. Just keep winning series. We got good starting pitching for the most part [during the streak]. Our bullpen was good. We scored a lot of runs. We got out in front of people and for the most part we played really good defense. The ball was hit to somebody, we caught it, threw it and got an out. We always kind of thought that this is the club that we are.”

Only another win streak will show that the last 11 days were the real Phillies. If they fall into old habits, get complacent and struggle against their hated rivals the Marlins — who have had Philly's number the last few seasons — the Thomson win streak could be proven a total fluke.

The Phillies' next 10 games are against teams with losing records. There's no reason they shouldn't win the majority of these and enter the wild card race in earnest.