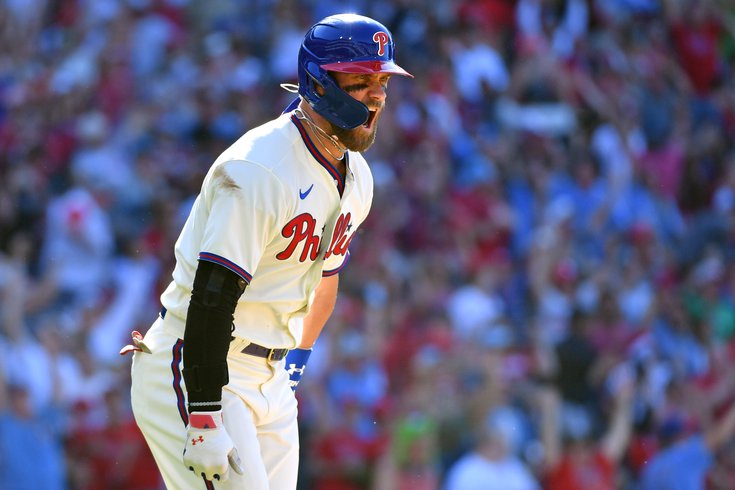 There is no better gauge to how close – or maybe far off – our teams are in their respective leagues, than comparing them to the teams playing for the trophy. The Boston Celtics and Golden State Warriors resume the NBA Finals on Wednesday, Colorado sits and awaits the winner of Tampa Bay and New York series, and the Super Bowl champion Rams just made their best overall player the highest paid non-quarterback.

All of the sports winding down provide a nice glimpse of what’s wrong with our respective teams. Despite legit and tangible hope surrounding the Philadelphia Eagles, there is also a noticeable gap between them and the true top-heavy teams. The Sixers are in limbo and the Flyers need a whole hell of a lot more than a new coach to compete with the Avs, let alone the Rangers or Lightning.

It’s a tough balance to have in the middle of the season like we are experiencing with the Phillies. Fresh off firing their manager, they reeled off four straight wins. The genius in firing Joe Girardi didn’t come with the actual decision, rather when it was made. Someone deserves a raise for firing this man ahead of a series against the Angels – who are so bad it’s not even funny anymore. It was like training wheels for Rob Thomson. My thoughts on the manager and management of this team haven’t changed since last week where we talked about how vital it was to allow the next person to be himself.

However, we embark into an MLB-led summer, no doubt full of Bryce Harper RBI and *checks notes* Alec Bohm home runs. The power will be here, the starting pitching has come around, but it’s great time to ask if they can truly compete with the big boys in this league. Right now, of course. Maybe it’s the fact that the NBA is almost over, and it pains me to no longer be able to watch live basketball, or the inevitable conversation surrounding Jalen Hurts in July.

I’m not sure if the Phillies have the defensive structure right now to compete with anyone in the playoffs. There are certain teams well above them in the standings – just look at the Mets – who can provide timely and directional hitting. To be able to take advantage of a team with so many holes on defense isn’t as difficult as one may think in baseball.

We know the bullpen is better than before, but not fixed. It’s not playoff-ready nor able to compete with top level teams. It’s good enough to be .500 at least, but there are still noticeable gaps between the consistent levels of closer to back-end pen guys here, something that isn’t nearly as obvious elsewhere.

The Brewers had the best and most consistent closer in baseball before Tuesday night. Without a blown save all year, the inevitable happens because it’s a long season and that’s baseball. But the point is Milwaukee is still in prime position to dominate late in games, and their closer isn’t going into some Cody Parkey shell.

The Phillies have new life and it’s important to support this team. We do not have to keep asking every week if they are good enough to win a wild card, or an NLDS, or even the World Series.

The very first thing would be buyers at the deadline in any possible way. Improving the defense to pen, this team can’t afford to waive the white flag because the Mets are dominating the division.

Maybe it’s an homage to a long-time legend of radio broadcasting in Philadelphia as Mike Missanelli signed off on the airways. I’ve gone out of my way to highlight how bad the constant push for least common denominator conversation through phone calls have done more damage to the Philadelphia psyche than anything else in this city, but there are always small exceptions, and Mike was able to master that often. I learned a lot from him because I chose to seek it out and was grateful for the time in explaining his own thought process with radio and the audience.

Like other greats who I’ve worked with, it was on me to seek out advice and insight into this business. I’m a product of that mixture from Michael Smerconish, Angelo Cataldi, Anthony Gargano, Howard Eskin, and yes, Mike. They took time to talk to me about this business, their ways and approach, then I saw it actualized. So, even me, who despises the typical phone call on the radio, can appreciate when it’s done right, even though the above are really the best examples of that – each in their own way.

What? Week 2?? We haven’t even exhausted whether or not Jalen Hurts can make the Pro Bowl this year, or if Nick Sirianni can win Coach of the Year!

A couple of weeks ago we jumped on the Eagles winning 10-plus games this year on FanDuel. We created a synthetic hold with another book, DraftKings, the NFL market maker in PA. By creating a synthetic hold between two books, one of them who sets the initial lines, we reduced the “hold” or “vig” on the bet to 0. That is a 50-50-coin flip on whether the Birds win 10-plus games no matter how many times you simulate the season, with a break-even percentage of 50 percent. That is a great bet.

So is this one, and it comes with a fantastic built-in angle with the opponent. We go back to FanDuel for this one and attack the Eagles hosting the Vikings in Week 2. It’s the Birds’ home opener and it lands on Monday Night Football – that’s a primetime game for those not keeping track at home. Before we explain why the bet will win, we need to make sure it makes sense.

FanDuel has the Eagles -124 to win this game on the money line, a rather low line to open the betting week. DraftKings is the market maker, meaning they set the lines through market discovery, and other books will copy. DraftKings can move this line, and most likely will, based on bets that come in. Only the bets they respect, of course. That’s why we need the market maker – in this case DK – as the other book to create a synthetic hold. DK has the Vikings at +115, which creates that hold of only 1.76 percent. Think of hold or vig as an ATM fee, but unlike the ATM, there is a chance you may not get your money. This is how the “house always wins.”

Now comes the fun part where you insert your own analysis and fundamental understanding of your football team and their opponent. Let’s not bury the lead, the Eagles need to beat Kirk Cousins – who is on the road – in a primetime game more than 55.37 percent of the time in order to cash a bet.

Take the Eagles right now -124 to do exactly that.