MLB trade rumors: A way too early look at Phillies potential options as buyers at the deadline 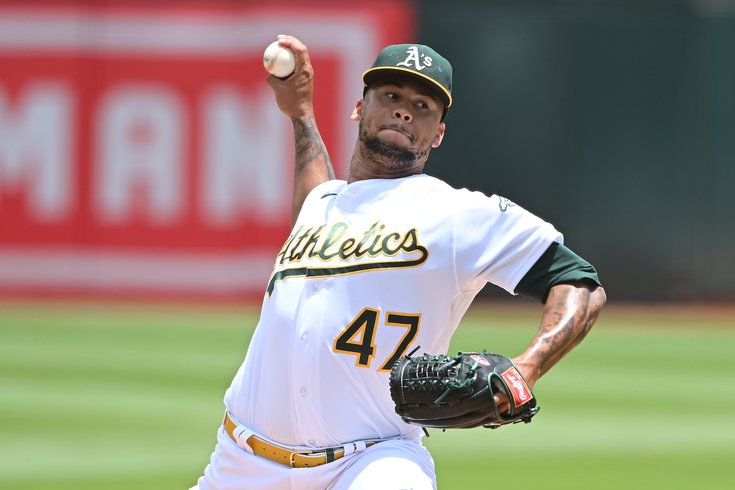 Frankie Montas could be on the Phillies radar a month from now.

After firing Joe Girardi, the Phillies are suddenly surging, winners of four in a row with two of them in epic fashion.

The young guys are buzzing, the superstars are contributing and perhaps the Phils will be able to fight their way into wild card contention by the time the trade deadline comes around in just under two months time.

If the Phillies are indeed buyers, their key areas of need will likely be adding a starting pitcher, adding to the bullpen or perhaps to the infield (depth has proven to be an issue with injuries to Jean Segura, Johan Carmago and others).

We will get into which prospects or other assets the Phillies could choose to flip for "win now" help in another post, but it should be acknowledged that they do have limitations with what they can afford.

That being said, what options are likely to be out there? We looked around the rumor mill and at some players on expiring deals on non-contenting teams, and here's a look at 10 potential and realistic options we came up with:

Making a gigantic splash for an All-Star caliber player is extremely unlikely for the Phillies, mostly because they are already spending past the luxury tax and they have big names at most of the major positions (like corner outfield or DH), but there are a few of them out there to be had — Bogaerts among them.

The 29-year-old multi-time Silver Slugger and All-Star is under contract through 2025, but he has an opt out after 2022 and if Boston is worried they'll lose him perhaps he will hit the trade market. Philadelphia would eagerly add him to the fold in the infield, particularly with Didi Gregorius set to have his contract expire. Bogaerts is hitting .320 through Wednesday afternoon with six homers and 26 RBI.

Simmons has struggled to hit in limited opportunities with Chicago (he had a late start to 2022), but he is a defensive guru and perhaps the Phillies would be interested in adding him to the fold to trying stabilize the defense (particularly late in games). He is on an expiring deal and the Cubs are having a pretty bad season, it could be a natural fit.

Montas is wasting his prime with a terrible Oakland team that has been rumored to be shopping him for years now. With arbitration coming in 2023, perhaps the A's will try and cash in with team control left for the 29-year-old. In 12 starts this year, Montas is 2-6, with a 3.06 ERA. He has 78 strikeouts to 16 walks. He would no doubt love to get some run support in Philadelphia.

Quintana is another really talented starter wasting his prime with a bad team. He is 33, well-traveled and not under contract in 2023. The Phillies could target him as a solid starting addition, as he has been light's out in 2022. In 11 starts he is 1-3 (run support much?) with a 2.85 ERA and just two total home runs surrendered.

Castillo had an ERA under four last year, but had 16 losses. That's impressive. His 2022 has been impressive too, as the 29-year-old sports a 3.55 ERA this season. He has one year of arbitration remaining in 2023 before he hits free agency in 2024. The Phillies wouldn't be out of line having interest in adding Castillo to a team that can score for him.

The seasoned former Cy Young, Gold Glover, and six-time All-Star is currently dealing with some minor injuries and pitching to a 5.05 ERA with Kansas City, but his deal is expiring and perhaps a healthy and motivated Grienke has one more playoff run in him?

Philadelphia needs some more reliable arms in the bullpen and this duo will walk away from Detroit in free agency in the fall. Either of these potential rentals would boost Philly's relief corps — Fulmer who has a 2.70 ERA in 20 innings, and Peralta who has a minuscule 0.81 ERA in 22.1 frames this season. The Tigers really have no need for this dominant pair right now.

Phillies fans and perhaps the organization itself likely have a bad taste from Robertson's "stint" with the Phillies that saw him get surgery, and appear in just seven games over two seasons, essentially wasting $21 million. But he is absolutely slaying in Chicago right now — a 1.66 ERA in 21.2 innings so far, with just four total runs allowed — and with his contract set to run out, he'd be a perfect veteran target for a playoff push.

We've highlighted a lot of relievers and starters who have been having great seasons, but there are also some struggling arms with proven track records who may benefit from a change of scenery. Strickland is in that category. Set to be a free agent in 2023, Strickland has a career ERA of 3.31 and had a 2.61 mark in 2021. This year he's struggled with command a bit and has an ugly 6.41 ERA. If he's acquired early this summer perhaps it's worth giving him a chance to find the strike zone and be a back of the bullpen asset for the Phillies.