Phillies fans have endured... a lot... to see their team make it this far 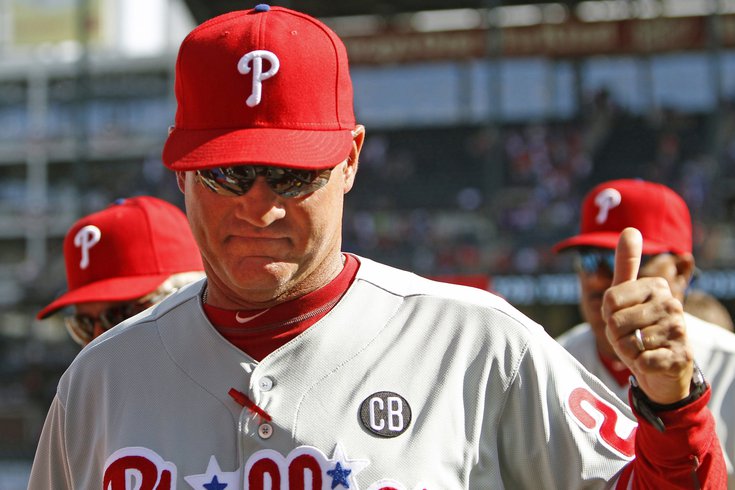 The Phillies have been through some tough times.

It's been a long long road to the World Series for Phillies fans. Has any fanbase endured more than Philadelphians have over the last decade plus as their baseball team went — seemingly overnight — from a train wreck to two games from World Series champion?

It's almost fitting that the second ever World Series no-hitter came at the expense of these Phillies, because of course it did.

As fans hope the Phils can win two of the next three against the Astros to complete this improbable run, here's a look back at some of the ridiculous slings and arrows this team has had to overcome on the road to contention. (And perhaps remembering the bad times will make these good times a little more sweet):

• In the years following Ryan Howard's torn Achilles in the team's last playoff game (until this October), Ruben Amaro Jr. and the rest of the front office continued to try and run it back as their core got older and started losing more and more.

• Remember Dominic Brown? The one-time top prospect and MLB All-Star proved to be a total bust.

• Jonathan Papelbon was the Phillies closer. He was good... but also not.

• The Phils sold Shane Victorino, Hunter Pence and Joe Blanton at the deadline — but stopped there.

• Jimmy Rollins and later Chase Utley were finally traded to the Dodgers (the team still has Zach Eflin from the Rollins deal).

• Ryne Sandberg was their manager and wasn't effective at all. He quit with the team in last place in 2015 in the middle of the season.

• Cole Hamels tossed a no-hitter in Chicago in his final start for the Phillies.

• The Phils used their top 10 first round picks on Cornelius Randolph, Mickey Moniak and Adam Haseley.

• Matt Klentak proved to be a pretty bad GM and the Phillies did not rebuild in any way shape or form during his tenure.

• Philadelphia had the worst record in baseball in 2017, and they brought in Andy MacPhail — who did little to stop the bleeding. Their starting outfield in 2017? Nick Williams, Aaron Altherr and Odubel Herrera.

• Year after year, the Phillies forced fans to root for mundane starters like Nick Pivetta, Vince Velasquez and Jerad Eickhoff. It was bad.

• With Gabe Kapler managing, the Phillies front office took a swing, trading J.P. Crawford (their top prospect at one point) to the Mariners. They would acquire Jean Segura in the deal.

• Before ever setting foot in a Major League game the Phillies signed Scott Kingery to a six-year, $24 million deal. He did not have an at bat with the team in 2022.

• The Phillies brought in Dave Dombrowski and went star-hunting. They signed Bryce Harper, traded for J.T. Realmuto, got Cy Young stuff from Aaron Nola and slowly began assembling the roster that took them to the 2022 World Series. Each year the team looked at least good enough to make the playoffs. But they did not.

In each of the four seasons above, the Phillies were at or over .500 heading into September. In the season's final month they combined to go 47-59 and miss postseason play each time.

• With the playoff field expanded to eight teams in each division, the Phillies missed the 8-seed in 2020 during the pandemic season in embarrassing fashion.

• Odubel Herrera was suspended by MLB for domestic violence against his girlfriend. The team would eventually welcome him back to play centerfield 184 times in 2021-22. He will get a ring if they win the World Series.

• The Phillies tried to bring in a serious manager in Joe Girardi. His firing is indirectly responsible for the Phillies amazing 2022 season.

• Philly continued to spend "stupid money," bringing in Kyle Schwarber and Nick Castellanos on mega deals despite the team's need for defense.

• The Phillies fired Girardi and Rob Thomson became interim manager — and you all know what happened after that.

• MLB had to expand the postseason so the Phillies and their 87 wins could make it as the 6-seed.

• MLB added a universal designated hitter, which allowed Bryce Harper to stay in the lineup despite an elbow that keeps him from throwing a baseball.

• A ridiculous 6-run ninth inning in St. Louis in the first round to give the Phillies full control of the Wild Card series.

• One of the greatest home runs I have ever seen in my life, off the bat of Rhys Hoskins to beat the defending World Series Champions from Atlanta.

• An insane 4-run comeback in Game 4 at home for the Phillies in the NLCS, before one of the greatest baseball games ever played in South Philly in Game 5, ending with Harper’s two-run homer to win it in the eighth.

• An even more insane five-run comeback in Houston to open the World Series.

• An embarrassing loss in Game 4 while being no-hit — a day after hitting five home runs in a 7-0 thrashing.

Yeah... it's been a lot. But the Phillies are still alive and are two wins from what is probably the least likely championship in the history of Philadelphia.