Phillies have been boom or bust in the World Series

A day after a record-tying performance, the 2022 Phils continue to defy logic and get no-hit in the World Series 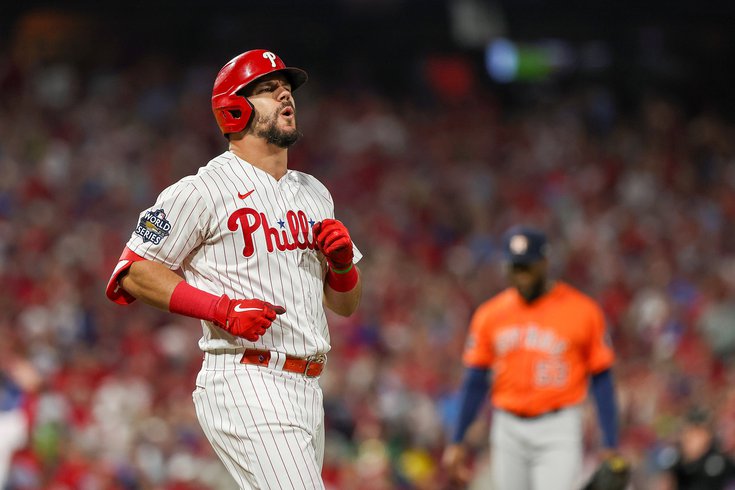 Phillies outfielder Kyle Schwarber reacts after just missing on a liner that landed foul in the third inning of Game 4 Wednesday night.

Since the five-run comeback in Game 1, the World Series has been boom or bust.

Game 2, the Astros jumped out to another 5-0 lead but kept it with Framber Valdez' curveball.

Game 3, with the series finally moving to South Philadelphia, the Phillies erupted for record-tying five homers and a 7-0 shutout that had Citizens Bank Park go berserk.

Game 4? Maybe the biggest bust you could think of.

A five-run disaster inning for Phils's pitching, no chance of hitting Houston starter Cristian Javier, and ultimately, a combined no-hitter for the first, devastating, loss at The Bank this postseason, 5-0.

The series is tied again, 2-2, and will go back to Houston for at least Game 6. Manager Rob Thomson will put his stock in a Noah Syndergaard-led bullpen start for Game 5 on Thursday and then a Zack Wheeler who hasn't looked right of late when the series goes back to Houston for Game 6 on Saturday.

The Astros haven't lost back-to-back games this postseason – haven't lost at all until this series – and came up with a fierce counter-punch to Game 3, but the Phillies haven't lost two straight either.

Who's going to crack first? The answer to that could ultimately decide the series.

"It's a loss for us and we gotta move on tomorrow," left fielder Kyle Schwarber, who went 0-for-3 in the leadoff spot with a strikeout and a walk, said. "It's a loss. I really don't know how to state that anymore to people that it's just a loss. Now it's a race to two, see what happens."

For better or worse, some trends broke Wednesday night, some remain, and some new, perhaps extremely concerning ones are beginning to establish.

• If the Phillies are going to win this, they're going to have to do it in Houston now. They took splits in the first two games on the road against the Braves and Padres in the NLDS and NLCS, respectively, then took control and won two straight then three straight to close out each series in front of the raucous hometown crowd.

• The ultimate home-field advantage at The Bank took its first hit Wednesday night. The ballpark got quiet for the first time when Aaron Nola and then José Alvarado ran into trouble in the fifth and stayed that way once everyone started noticing that it was getting late and the Phillies didn't have any hits.

• The bell and the fireworks, unfortunately, had the night off too. Game 4 was the first time the Phillies failed to score any runs at home this postseason and, obviously, hits. They scored no less than four runs in every playoff game at Citizens Bank Park before Wednesday night.

• Again, neither team has lost back-to-back yet this postseason, so the best-case scenario is the Phillies bounce back against Justin Verlander in the bullpen start then fly back to Houston with control of the series handing the ball to Wheeler in Game 6.

It's the first World Series in history in which a team led, 5-0, or more in 4 straight games.

• When Aaron Nola hits a wall, he slams full speed right into it. Since those clean starts against the Cardinals in the Wild Card round and the Braves in the NLDS, Nola has fallen into bad innings against San Diego in the NLCS and now twice against Houston and can't recover.

On Wednesday night, he had good command of his curveball and was getting batters out, but too few of them were coming easy. His pitch count was climbing, and when he got to the fifth, the tank hit empty. The Astros knocked three straight singles and he was pulled for Alvarado with the bases loaded, no outs, and no room for error.

"That's kind of the team they are," Nola said of the Astros' lineup. "The past two games I've faced them, they've done that. They don't go down easy, especially with two strikes. They battled up there."

Alvarado erred. Things fell apart. The top of the Phillies' rotation, between Nola and Wheeler since Game 5 of the NLCS, don't look entirely right. That's a problem.

• Even taking the Game 1 comeback into account, the Phillies' bats have been struggling against Houston's high-velocity hurlers, and against Javier in Game 4, they got jammed up a lot.

Phillies since Brandon Marsh's walk in the 3rd inning:

No one's walking away happy from getting no-hit in the World Series, but because this is the 2022 Philadelphia Phillies, who have so routinely defied logic, this isn't even the first time they've been no-hit.

The Mets did it to them back on April 29. They came back and won the next day.

"These guys, they got a short memory," Thomson said. "They're gonna go home tonight, go to bed, come back in here tomorrow, prep, and compete like they always do."

Look, these are obviously different circumstances. It's the World Series, not the regular season, and there are only a possible three games left, not 100-plus. Every at-bat, every pitch only gets increasingly more critical from here. But hey, it's something.