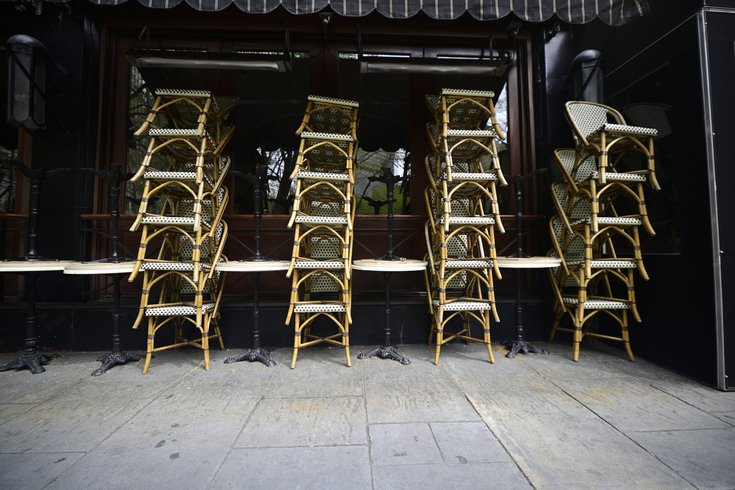 Philly officials say the city is not close to entering the next phase of Pennsylvania's COVID-19 reopening plan. Above, the sidewalk seating at a restaurant lining Rittenhouse Square remains packed up on April 20, 2020.

Philadelphia is not close to entering the next phase of Pennsylvania's reopening plan, which gradually lifts restrictions in regions where new COVID-19 cases fall below a particular threshold, city officials said Thursday.

The city is "not at or near the Yellow phase," when restrictions first relax on business and social activities, Health Commissioner Dr. Thomas Farley said. To get there, Philadelphia needs to reduce its number of new daily cases.

In the Yellow phase, businesses, including retail outlets and child care centers, will be able to reopen with some restrictions. In the Green phase, state operations mostly will return to normal but incorporate U.S. Centers for Disease Control and Prevention guidelines.

State officials hope to begin reopening some regions on May 8. They said regions will not reopen until daily cases average less than 50 per 100,000 individuals over a 14-day stretch.

Philadelphia is reporting 400 to 500 new cases each day, Farley said. Therefore, he does not expect the Philadelphia region to be among the first to advance to the Yellow phase.

"It is extremely unlikely that in two weeks we will be at under 50 cases per day," Farley said. "How many weeks away, we can't say. The virus determines its own schedule."

Pennsylvania Health Secretary Dr. Rachel Levine said Thursday that other factors also will be at play, including testing capacity and the ability to conduct contact tracing of new COVID-19 cases.

She also stressed that regions would advance through the phases – not individual counties. If coronavirus cases dip in one county, but remain high in surrounding counties, that county will not advance to the next stage on its own.

"We might have a county where the rest of the region is having significant rates of COVID-19," Levine said. "They might meet that criteria, but we would not reopen that region. It's not going to be isolated, county by county. It's actually going to be region-by-region, looking at the case counts from each county."

Farley supports the push for contact tracing and increased testing in the Philadelphia region, but he stressed that the city has limited resources to accomplish those efforts.

Contact tracing aims to limit new coronavirus infections by reaching out to anyone who came in contact with a newly-infected individual. Once the city is reporting far fewer cases per day, it becomes more feasible.

"It is necessary to do contact tracing in order to do a full reopen," Farley said.

Even when new sites open, they remain hampered by limits on tests, swabs and lab capacity, officials said.

Residents will be able to call ahead to see whether they can receive testing at the new sites, officials said. More information on the sites will be provided when they are officially announced.

About 30% of the beds in Philadelphia hospitals remain available. Some hospitals are at, or near, capacity, Farley said. But others have space.

Case clusters continue to come from people living in group settings, like prisons and nursing homes. There are 59 confirmed cases among the city's prison system. There have been 237 COVID-19 deaths among nursing home residents.