Greenlee: 'It could have been me' 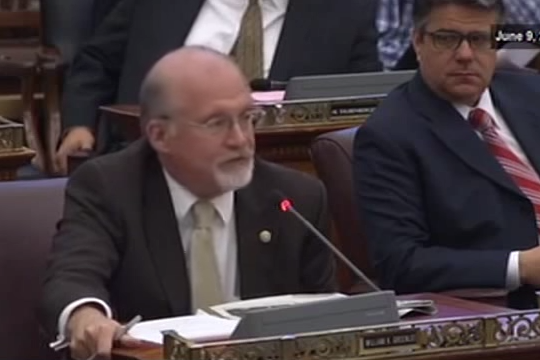 A Philadelphia city councilman of the Catholic faith made it a point to comment on the Archdiocese of Philadelphia's efforts to push back against a piece of legislation meant to extend legal rights to child victims of sexual abuse.

On Thursday, Councilman-At-Large Bill Greenlee said a recent report about some Catholic state legislators being called out by their local parishes for supporting the bill made "the few hairs still on my head stand up."

House Bill 1947 would allow people who claim they were sexually abused as kids to bring civil lawsuits until they turn 50, up from the current age limit of 30, and would prevent institutions from claiming immunity if they are found to have acted in gross negligence. It passed the House by a vote of 180-15 in April and now awaits Senate action.

This week, the Associated Press reported that several state representatives were essentially shamed by their churches because of their vote. Some say they were called out directly by their priests or in their church bulletins.

Greenlee said the report reminded him of the 2015 movie "Spotlight," a film about The Boston Globe's coverage of rampant child sex abuse in the Archdiocese of Boston.

More specifically, Greenlee said the story reminded him of the scene in the film where Mark Ruffalo, portraying journalist Michael Rezendes, says the abuse could have happened to any of his colleagues who grew up as members of the church.

"As a Catholic growing up in the '60s, it could have been me," Greenlee said. "Luckily, it wasn't. But I know somebody that was. And this is a very, very heart-wrenching issue to have to deal with if you were a victim."

He said he saw how the person he knew was abused dealt with the aftermath, and said giving that person extra time to "work all this out" and get proper justice was fair.

Archbishop Charles Chaput has argued in opposition of the bill, saying it places an unfair financial burden on "innocent Catholic parishes and families" for the transgressions of "bad individuals in the past."

Chaput, who successfully fought similar legislation in Colorado more than a decade ago as Denver's archbishop, made that case in a letter distributed to all 219 parishes this past week, urging parishioners to tell their local senator to vote against the bill.

Greenlee said he hopes the Senate passes the bill and that it becomes law. He finished his remarks by joking that if the Archdiocese decides to go after all Catholic office holders who support the bill, they should feel free to target him.

"The name's Greenlee, G-r-e-e-n-l-e-e," he said to laughter on the floor of the Council Chambers.

"When they print that name, they can put it in bold, underlined with exclamation points."

You can watch Greenlee’s remarks below: