A vigil at Mother Bethel African Methodist Episcopal Church will begin at 7 p.m.

The Rev. Clementa Pinckney was a humble man committed to returning Mother Emanuel African Methodist Episcopal Church to its glory days, according to a Philadelphia pastor who considered the shooting victim a friend.

Mother Bethel AME, located at Sixth and Lombard streets, will host an interfaith prayer vigil at 7 p.m. Thursday for the victims and families of Mother Emanuel AME. Tyler expects hundreds of people to gather at the vigil, saying several area churches have canceled their own events to take part.

“This blow is a blow that strikes AME all around the world,” Tyler said. “It is so personal to people.”

It is particularly personal to Tyler, who had known Pinckney as a colleague for about 10 years. Tyler saw Pinckney about four or five times a year, often at AME conferences. 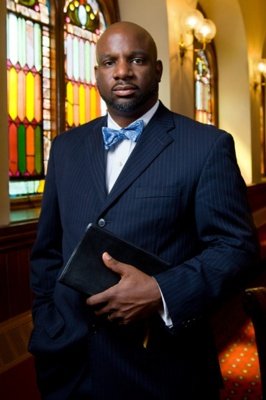 Tyler, pictured left, said the two became closer after Pinckney was assigned to Mother Emanuel AME in 2010. They often swapped ideas on how to revitalize historic churches facing aging buildings and declining congregations.

“We shared the joy and burden of pastoring old, historic churches with ‘mother’ in front of it,” said Tyler, who began pastoring Mother Bethel AME in 2008. “We both were excited about getting appointed and serving these churches.”

Tyler described Pinckney as a man possessing a “servant’s heart.” Pinckney, he said, could have requested an easier pastoral assignment — but he didn’t.

“He was committed to trying to bring Mother Emanuel back to its glory days,” Tyler said. “He believed that it could have happened.”

Instead, the lives of six males and three female are being mourned across the country after they were shot dead during a Wednesday night Bible study.

The act, allegedly committed by 21-year-old Dylann Roof, violates the concept of sanctuary, Tyler said. He called the shooting an attack against people of all faiths.

“It’s just unbelievably shocking and it fills me with deep pain and grief,” Tyler said. “The church is a place where you walk in and there’s this reasonable expectation that, in this place, I can totally let my guard down.”

The U.S. Department of Justice opened a hate crime investigation Thursday. Roof, who allegedly sat within the Bible study for an hour before opening fire, was arrested during a traffic stop in Shelby, North Carolina.

Tyler said he cannot look at the shooting “in isolation or a vacuum.”

The shooting came during a year that has seen months of racially charged protests across the country over killings of black men. Tyler compared Wednesday's shooting to the 16th Street Baptist Church bombing in Birmingham, Alabama, a 1963 act committed by white supremacists at the height of the Civil Rights Movement.

“To me, as I view this, I can’t separate those events from this experience of last night,” Tyler said. “I’m still in shock myself. That’s what jumps out at me from the beginning — that there’s a history of this.”