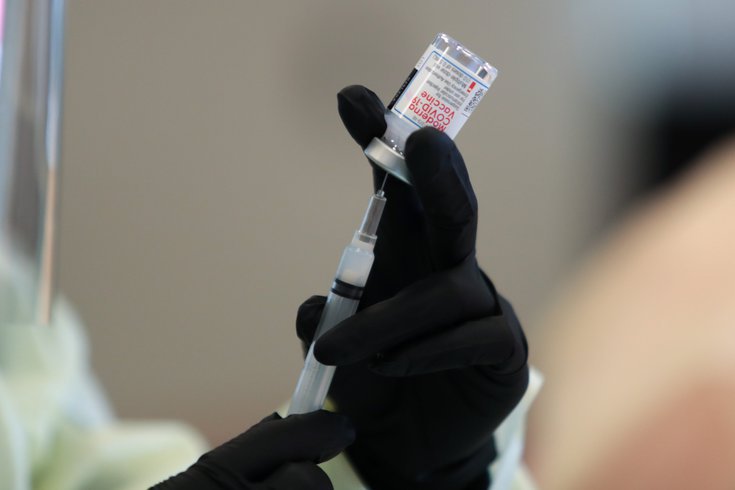 The Philadelphia Department of Public Health terminated its COVID-19 vaccine provider relationship with Philly Fighting COVID in January, leading to an investigation by the Office of the Inspector General. A new report details the findings of the ongoing probe.

A report from the Office of the Inspector General describes the series of missteps that led to the health department's messy break with Philly Fighting COVID, the first organization to hold mass vaccine clinics in the city.

The unraveling of the city's partnership with PFC became a dark cloud over Philadelphia's COVID-19 response in January, when Health Commissioner Dr. Thomas Farley announced that the city was cutting ties with the organization. The report from Inspector General Alex DeSantis examines a history of problems the city encountered with Philly Fighting COIVD, a group led by 22-year-old entrepreneur and Drexel graduate student Andrei Doroshin.

(The 17-page report is available to read at the end of this article.)

When the relationship was terminated, Farley blamed PFC for not informing the city it had created a for-profit arm nor that it had updated its terms of service, allowing people's personal data collected on its website to be sold. Both of these were issues were first reported on by the Inquirer. Farley also was bothered by the group's abrupt discontinuation of some COVID-19 testing services that had been run in partnership with the city for months, as reported on by WHYY.

DeSantis' report said there were red flags that should have prevented PFC from becoming the city's leading vaccine partner, had there been greater oversight and communication of these issues to department leadership about the risks they represented.

Doroshin and his early partners established Philly Fights COVID in April 2020 as a charitable organization focused on manufacturing face shields for local hospitals and health care workers. In June 2020, the organization shifted its resources toward COVID-19 testing, working with Quest Diagnostics and setting up an independent testing site at the Fillmore Philadelphia in Fishtown.

The health department's chief testing and surveillance officer became aware of the PFC site and told Doroshin about an opportunity for funding through the Philadelphia Mental Health Care Corp., which administers COVID-19 testing contracts.

PFC received a six-month contract and $194,234 to expand to up to 59 testing locations in Philadelphia. PFC was supposed to coordinate dates, times and locations of the testing site with the city's health department. The group also was supposed to focus making coronavirus testing accessible to underserved communities and frontline health workers.

Problems with PFC's invoicing, documentation and site selection began to crop up in the months that followed, well before Doroshin positioned the organization to land the partnership managing vaccination sites.

According to DeSantis, Doroshin was described by health department staff as "unprofessional and rather aggressive" about receiving payments, applying pressure for upfront funds to cover administrative costs.

After the testing contract formally began in August 2020, PFC partnered with the South Street Headhouse District to set up an open-air testing site in Society Hill, around Second and Pine streets.

Once the site got up and running, South Street Headhouse District organizers received complaints from community members who were upset that the location was close to an outdoor children's event that had been scheduled at the same time on Sept. 3.

The health department immediately ordered PFC to cease operations at the site and informed the group that they would not be reimbursed for costs there. Doroshin was told that city-funded testing was supposed to be for underserved locations, a definition not met by Society Hill.

Then in November, one woman who tested at a PFC clinic notified the health department that the group failed to notify her of a positive test result, which led to exposure at her workplace and a shutdown by her employer.

Payment issues between the city and Philly Fighting COVID came to a head in early January when health department contract managers noticed PFC hadn't submitted any invoices for testing since November. From the inspector general's report:

... Doroshin submitted final invoices, noting that Dec. 23 was the last day of any PFC testing. Upon review, health department employees identified a number of discrepancies, including the lack of appropriate signatures on several timesheets and at least one PFC staff member who was reportedly in two locations at once. Based on these issues, the Health Department refused to pay. Doroshin protested, and the matter is still unresolved.

The report goes on to examine the health department's lack of consideration for the problems with PFC, even while Doroshin was actively angling to receive a vaccination contract on the city's Vaccine Advisory Committee, which formed last September.

PFC was invited to join the committee by then-Acting Deputy Health Commissioner Dr. Caroline Johnson, who resigned in January after it was determined she had inappropriately provided both Doroshin and the Black Doctors COVID Consortium with a suggested budget, giving them an advantage in the vaccine bidding process.

Inadequate vetting of PFC's internal dysfunction resulted in the city overlooking concerns that were reported to the health department by Philly Fighting COVID's first chief medical officer, who left his post when Doroshin was evasive about the organization's switch to for-profit status.

Once Doroshin secured a new chief medical officer — a requirement by the CDC to apply for vaccine administration — the health department evidently accepted this shake-up without much scrutiny.

"This was a serious red flag that should not have been ignored," the inspector general's report says.

Though the report characterized Farley as "disconnected and uninformed" about the health department's fraught relationship with PFC, Farley is credited with stepping in to cut ties with the organization before the situation became more problematic.

"The facts presented here suggest that Dr. Farley was the most cautious voice within the Health Department," the report states. "As such, the OIG offers no recommendation for discipline at this time — the investigation remains ongoing."

DeSantis' office has recommended that the health department conduct additional training for all employees involved in the contracting process, establish procedures to ensure timely emergency response and bring new operations and procurement personnel where needed.

It is also recommended that the department build greater transparency in vaccine allocation between and among various city providers, making quantity and dosage distribution publicly available information.

"Philly Fighting COVID was a mistake — we've said as much — but we must also note the inspector general found no malice, no ill-intent, and no one seeking personal gain," Kenney said. "The inspector general found that these decisions were made with the goal of moving quickly during the emergency. I agree. This was a case of bad decisions being made in the midst of a lengthy and constantly evolving crisis, and a top manager who should have been more directly involved."

Farley also welcomed the report and acknowledged the need to ensure better safeguards.

"It is my responsibility that the Health Department doesn’t make bad decisions — like working with PFC — no matter how quickly we are trying to respond to this epidemic," Farley said. "We have been and will continue to work hard to vaccinate Philadelphia residents appropriately, quickly, and equitably, and to rebuild the public trust."