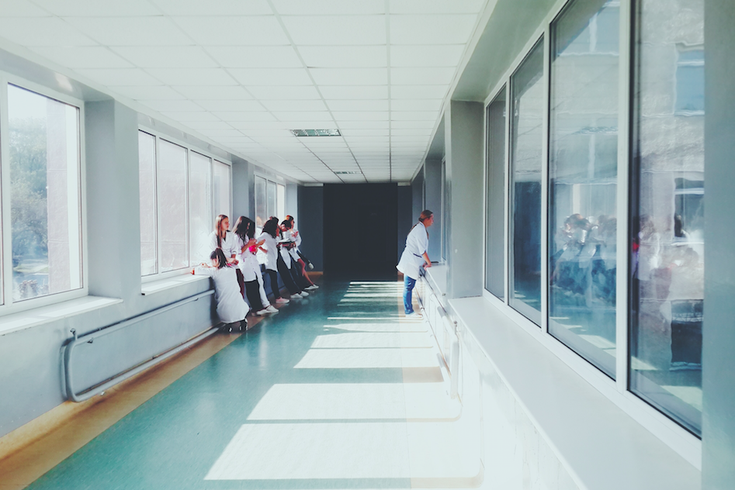 Philadelphia hospitals are treating more COVID-19 patients in intensive care units, putting strain on some facilities as the region approaches the expected peak of its coronavirus epidemic.

Philadelphia hospitals are treating a higher number of COVID-19 patients in need of intensive care, potentially putting a strain on city resources as the region enters an anticipated peak of the epidemic.

Some hospitals are facing challenges and may soon need to transfer patients to other locations, Health Commissioner Dr. Thomas Farley said Wednesday. There currently are 778 patients with COVID-19 in Philadelphia hospitals – about half of the 1,428 patients hospitalized in Southeastern Pennsylvania.

Among all regional hospitals, 42% of beds are still available, but just 27% of intensive care unit beds remain open.

Farley did not specify which hospitals are approaching capacity. The peak of hospitalizations, thought to be occurring around this time, could be delayed if those recently infected soon require critical care.

"If the virus spreads more than we think it's spreading, we may continue to see increases for a while," Farley said.

The Liacouras Center, which has been converted into a field hospital, will be ready for use as soon as Thursday if the need arises. The facility is intended for "step-down" COVID-19 patients who are close to a full recovery and will not relieve the burden on intensive care units.

Philadelphia reported 311 new COVID-19 cases, bringing the city's total to 7,441. Another 16 fatalities brought the total deaths up to 222. Exactly half of them were nursing home residents.

While the daily number of new cases appears to be falling — a key indicator of progress — Farley cautioned that a number of large laboratories have been delayed in their reporting of test results. It's likely that the daily counts in recent days have been lower than they should be.

"We're checking with the laboratories to see if there's some problem with the data feed that we're getting," Farley said.

Though there are more than 20 COVID-19 testing sites in Philadelphia, supplies to administer and analyze tests in labs remains limited, he said. The ongoing scarcity of testing continues to make it difficult to project the full scope of the epidemic in Philadelphia and other locations across the country.

City officials have reached lease agreements with two additional hotels to provide quarantine and isolation space for those who cannot remain at their homes, Mayor Jim Kenney announced.

The Fairfield Inn & Suites by Marriott in Center City and the Marriott Springhill Suites at the Philadelphia International Airport will have rooms available for these purposes. The Holiday Inn Express in Center City already is being utilized.

The city now has access to more than 300 hotel rooms. As of Wednesday, 44 people were staying at the Holiday Inn Express.

The city continues to deal with a shortage of personal protective equipment that has impacted large parts of the United States. Kenney said the lack of federal preparedness has led to cities and states bidding against the federal government to obtain necessary supplies for front line workers.

"If the federal government had done a better job in stockpiling PPE, it would have been distributed uniformly and we wouldn't have this mad race to try to find this stuff," Kenney said.

The mayor was equally critical of President Donald Trump's decision to halt U.S. funding for the World Health Organization amid criticism that it downplayed the initial coronavirus outbreak in China.

"I can't explain what goes on between his ears," Kenney said, "but it's a bad thing."

"I think it's a terrible decision," Farley added. "We need the World Health Organization more than ever right now."

The city also is partnering with the Philadelphia Corporation for Aging to open 23 meal sites for vulnerable seniors. Family members of seniors will be permitted to pick up these meals once they have been registered.

The city also will begin providing free supplies to caregivers of infants and toddlers, including food and diapers, at 10 sites in Philadelphia.