In Philly, millennials not exactly Bern-ing for revolution

With the Pennsylvania primary is five days away, can Sanders engage the youth vote? 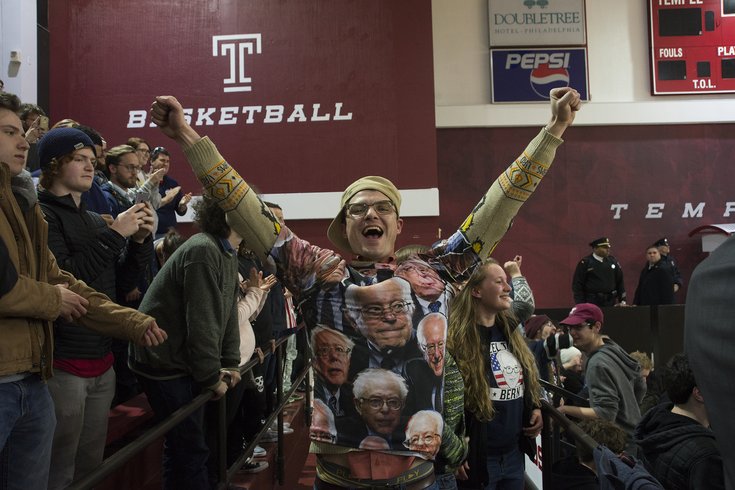 Matt Smith wears a shirt printed with multiple images of Bernie Sanders during the Vermont senator's campaign rally at Temple University on Wednesday, April 6, 2017. Smith said he supports Sanders because 'The banks control everything, and Bernie isn’t afraid to take them on.'

Democratic presidential candidate Bernie Sanders has had no problem packing venues around the country with cheering young people, including a recent campaign stop at the Liacouras Center at Temple University.

But does that strong, often frenzied, show of support from millennials mean they are engaged politically on behalf of the Vermont senator's bid for the White House?

“I am in support of Bernie Sanders because he is clearly able to articulate the issue of large corporations pouring massive amounts of money into campaigns and the power it yields in terms of impacting the outcome of elections,” Olney resident Michael Rahming told me as he canvassed voters for Sanders.

Rahming, 29, is the 13th Congressional District delegate for the presidential candidate he believes “has maintained a strong record of advocating for the rights of African Americans in the criminal justice system.”

“I am chiefly concerned with criminal justice reform, as it relates to the mass incarceration of African Americans, as well as harsh sentencing that adversely affects men of color and other minority groups,” he said with passion.

But this graduate student in criminal justice may be an anomaly among the many millennials in Philadelphia who are showing support for Sanders. In a campaign that makes the case for calling itself a “political revolution,” it’s hard to find evidence of such a scene taking place in this city.

Sanders has played to millennials across the nation with his calls to make college universally affordable, raise the minimum wage to $15 per hour, and root out corruption by the big banks.

But Sanders' delegate count has failed to match the enthusiasm seen in his huge public gatherings. So with the Pennsylvania primary just five days away, what exactly is happening to reverse that trend here? The campaign wasn't very forthcoming about the number of folks it has on the ground in Philly, as it competes against a local political machinery dedicated to Clinton.

“We can’t provide any numbers publicly on volunteers and staffers,” said Greg Minchak, regional press secretary for the Sanders campaign. “If anything, we can only provide you with the number of offices.” 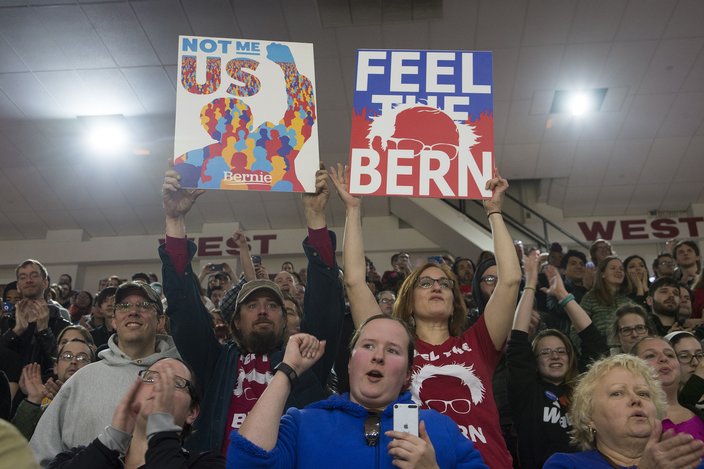 Supporters cheer on Bernie Sanders as he addresses them at a rally at Temple University on April 6, 2016.

Numerous calls over the past week to campaign staff resulted in delayed responses and no volunteer or staff figures. Efforts to speak with staffers at a new office at 274 S. 60th St. in West Philadelphia were unsuccessful. Nobody was allowed to talk to the press.

And finding Bernie supporters on the ground who could offer up more than talking points from social media proved difficult, too.

The protesters took to Center City with signs that called out the former secretary of state’s past “superpredator” remarks and associated the spelling of her name with the KKK. Some in the crowd spoke of their support for Bernie Sanders, but nothing could be said about their work to get out the vote.

'HE HAS THE HEART OF THE YOUTH'

Away from the protests, it was hard to find non-college students willing to talk about supporting Bernie Sanders actively in Philadelphia.

“He’s the young people’s grandpa, just as an old Jewish Guy who is shooting straight like an Old School dude from Brooklyn would,” said Christopher Norwood, a real estate agent living in Center City.

Norwood, 30, said he participated in a few phone banks but admitted he was “probably not the most supportive supporter.”

“He has the heart of the youth. I think he would do very well as president,” he added.

At a watch party for last Thursday debate between Sanders and Clinton, few supporters agreed to be interviewed about their support.

“It’s been very difficult bringing my friends out to feel the Bern. They feel it, but haven’t been able to make it out to some of the events,” said Samantha, a 27-year-old social worker in North Philadelphia, one of the few supporters willing to talk. “I think a lot of it has to do with the kind of people he reaches out to – working class people who are working long hours and can’t get off to support him.”

Still, some expressed optimism about their plans to continue the “political revolution” in Philadelphia after the primary.

“If Bernie does not win, I will continue to engage residents in my community to participate in the democratic process...I also firmly believe that both candidates should continue to campaign and hear the views of the nation,” Rahming said. “I believe that both candidates are doing their best to challenge the views and are bringing out the best in the Democratic party.”

“I will continue trying to be a great human just as he was,” said Norwood. “Hillary is definitely my runner up...I certainly won’t be voting Republican.”

Then, with a slight laugh, he added, “but maybe my vote doesn’t even matter.”