The Democratic frontrunner brings her campaign back to Philadelphia

One day after securing an important victory in New York, Hillary Clinton quickly turned her attention to Pennsylvania.

Clinton, the frontrunner for the Democratic presidential nomination, highlighted her experience and pragmatism during a 30-minute speech Wednesday at The Fillmore, a new Philadelphia concert venue in Fishtown that holds some 2,500 people.

"We've got to quit the divisiveness," Clinton said. "It's not the way to solve problems. If you have something to say, you can draw attention to it. But then have a conversation about it."

Having won her home state Tuesday, Clinton has the Democratic nomination in sight. Five more Northeastern states head to the polls on April 26, with Pennsylvania and its 210 delegates standing as the biggest prize.

But she also emphasized her breadth of government experience, saying she knows both how to compromise and stand her ground. It's a message that seemingly resounds with her followers.

"She knows how to get things done," said Matt Hartman, 28, of Philadelphia. "She knows the issues. She knows her stuff. That really resonates."

Supporters began lining up outside The Fillmore hours before her campaign event took place. Once inside, they packed the floor to get an up-close look at Clinton, who took time to shake hands and pose for selfies after her speech. Others crowded into the balcony or stood along risers behind the stage.

"It's kind of surreal to see that person you've seen on TV and supported right in front of you," said Kelsey Mills, 28, of Philadelphia. "She seemed very relatable up there."

Not everyone was happy to see Clinton. Several minutes into her remarks, a group of protesters began shouting at Clinton, but she did not acknowledge them. Instead, security personnel escorted them from the facility.

One protester chanted, "Don't vote for Hillary, she's killing black people," as she was escorted out of the building.

A similar protest occurred earlier this month when Bill Clinton stumped for Hillary at a Northwest Philadelphia school. He verbally sparred with the protesters, in part, over a 1994 crime bill he signed into law. His response drew national media attention.

But the vast majority of Wednesday's crowd cheered Hillary Clinton with enthusiasm.

"You would almost say she's overqualified," said Terez Giuliana, 59, of Roxborough. "Aside from her vision, just her experience and qualifications, nobody can match it. On the first day, she doesn't have to look for the extra key. She knows where it is."

Clinton has made her experience as a former first lady, senator and secretary of state a focal point of her campaign. Yet, she has drawn a considerable challenge from Bernie Sanders, a self-described "democratic socialist" who has captured the hearts of many millennials and progressives.

"Bernie has a wish list," said Steve Saddler, 30, of Aston, Delaware County. "She has a to-do list."

"She's very pragmatic," said Joey Galantuomo, 21, of Reading, Berks County. "It's a very sound approach. I can see her actually being able to enact it. She has the experience to do it." 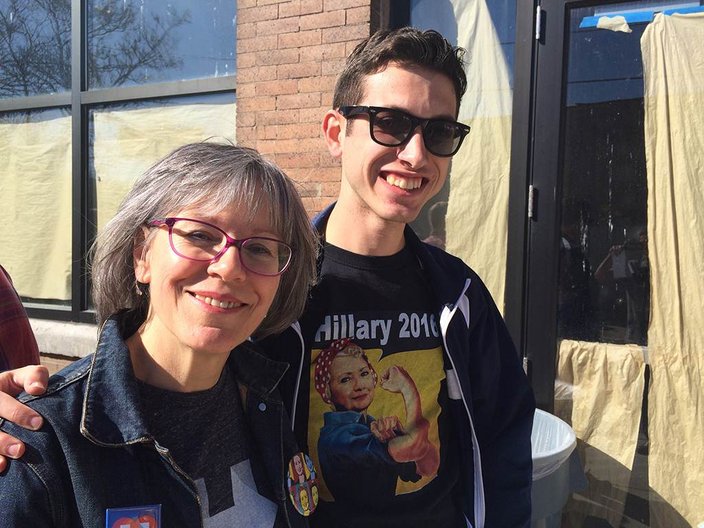 Terez Giuliana, 59, of Roxborough, and Dan Maloney, 21, of Doylestown, wait to enter The Fillmore to hear Hillary Clinton speak in Fishtown.

To win the party's nomination, a candidate needs to gain 2,383 total delegates.

Amanda Atkinson, 38, of West Philadelphia, supported Clinton in 2008, when she lost to Barack Obama. But with Clinton beating Sanders in New York, Atkinson said she hopes the United States will elect the first woman to serve in the White House later this year.

"She's the most qualified," Atkinson said. "It's like that old quote about Ginger Rogers. She had to do everything Fred Astaire did, but backwards and in heels."

Earlier Wednesday, Clinton met with former Attorney General Eric Holder and Mothers of the Movement, a group of mothers who have lost children to gun violence.

Polls peg Clinton as the favorite in the Keystone State. The latest, released Wednesday by Monmouth University, shows Clinton leading Sanders by 13 points.

Sanders will bring his campaign back to the Philadelphia area on Thursday, hosting a rally at the Greater Philadelphia Expo Center in Oaks, Montgomery County.

Both Clinton and Sanders began campaigning in Pennsylvania earlier this month. Each candidate has television advertisements running in the Philadelphia region.

"I particularly like the fact that her issues (encompass) all Americans, not just selected zip codes or socio-economic levels," said Kim Edwards, 58, of Philadelphia. "She definitely looks out for the underdog."

Sanders previously held a rally at Temple University, questioning Clinton's qualifications to be president. Clinton also campaigned in Philadelphia that day, speaking at the annual Pennsylvania AFL-CIO convention. Sanders addressed the same convention the next day.