Can you answer these tough questions from David Simon's hit HBO series? 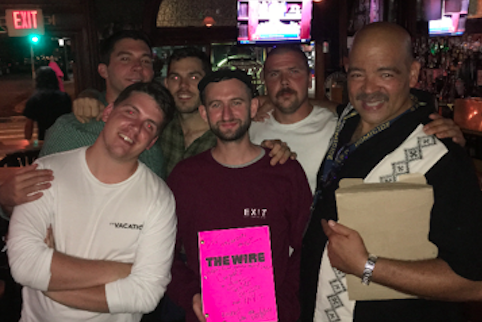 Winners of 'The Wire' Quizzo pose with actor Brian Anthony Wilson at the London Grill on Monday, August 7, 2017.

Way down in the Philadelphia watering hole known as the London Grill, five young mavens of HBO's celebrated crime drama "The Wire" done changed the game.

At last Monday's Quizzo event, hosted by Brian Anthony Wilson, aka Baltimore police detective Vernon Holly, 32 teams packed into the Fairmount bar and restaurant. They ranged in size from one to five people, all there to claim street cred scholarship in what many rank among the greatest shows in television history.

"We played most of the game standing outside of a single-stall bathroom," said Ryan Dawson, 28, a member of the winning team, Orlando's Hoez. He was joined by Jeff Eidell, Aidan Granstrand, Ben Axelson and Drew Mirande, who went by Ziggy for the duration of the night.

The team name, Dawson clarified, comes from a specific moment in the second season of "The Wire," a series he said he's watched a gnarly 10 times front to back.

"Orlando is a pimp for the Barksdale crew," Dawson said. "They mention it when Kima gets shot by Weebay while she's working undercover as one of Orlando's girls."

It's a testament to series creator David Simon that "The Wire," which wrapped up its fifth and final season in 2008, still serves as a benchmark for the success of so many ambitious shows that have come in its wake.

Entertainment value is just a piece of that calculus. The series has spawned college courses from Harvard and Duke to Berkely and the University of Pittsburgh. As an examination of social decay, unbending pride and the passing of power's corrupt bottom buck, its verisimilitude is haunting. Everyone must become someone's heel in order to survive or die with some dignity trying.

But these are broad brush strokes for more than 60 hours of television. The members of Orlando's Hoez may be among the most knowledgable "Wire" fans in the country. Through four rounds of ten questions and an overtime period, they got everything right. Not one slip-up.

Here's a sampling of the questions they fielded, all of varying difficulty. An answer key can be found below the story.

1. What unit does detective McNulty get transferred to in the beginning of the second season?

2. What was the name of Herc and Carvers fake see-eye that is actually a round tennis ball?

3. Name two famous rappers that were featured in the show.

4. When McNulty is posing as a serial killer, what color ribbon does he place around his victims' wrist?

5. Where did hitman Brother Mouzone hail from?

In the days leading up to the Quizzo event, Dawson said he and his teammates dug deep, probing each other on some of the show's most arcane details. Their questions, passed back and forth in a feverish text thread, were much more difficult than what they encountered at London Grill.

1. What were the three magazines Brother Mouzone sent his henchman out to get?

2. What was Ziggy's affectionate nickname for his car?

4. What does D'Andre's mother bring him for lunch in the pit?

5. What breakfast meat does McNulty order at the diner after crashing his car? What was he listening to when he crashed?

6. In an effort to save his own life, what gang does Wallace claim just before his two best friends, Poot and Bodie, kill him?

"Hard work pays off, so I take no days off," Dawson said of the team's flawless victory.

Fittingly, the Quizzo overtime came down to the wire. It tilted on a single question in a battle between Orlando's Hoez and a lone wolf who had also been perfect through four rounds.

What was the name of Cheese Wagstaff's dog that loses in a dog fight and has to be put down in the 3rd season?

"It was a trick question," Dawson said. Four out of five of Orlando's Hoez were stumped. One of them, Jeff Eidell, threw a hail mary.

Dog. The answer was that the dog's name was Dog.

Wilson, who hosted the event in part to promote his acclaimed one-man show, "Thurgood," presented Orlando's Hoez with a signed copy of the script from Season Three, Episode One.

To celebrate their victory, Orlando's Hoez tipped their hats to Jimmy McNulty.

"We drank some Jamisons," Dawson said. "And listened to The Pogues."

1. The Nation, The Atlantic Monthly and Harper's

5. Scapple and The Pogues