Photo by B. Krist / Visit Philadelphia™

If you live in Old City or Society Hill, you have a better chance of sticking around well into your 80s than residents of most other Philadelphia neighborhoods, according to a joint study by the Robert Wood Johnson Foundation and Virginia Commonwealth University.

Based out of the Center on Society and Health, the study's population researchers looked at a range of connections between social and health factors that contribute to life expectancy rankings across 62 Philly zip codes.

Death data obtained from the Philadelphia Department of Public Health was first broken down into 19 age categories in each zip code between 2003 and 2012. Final calculations were based on a weighted average of U.S. Census Bureau information from 2000 and 2010, while age groups without any deaths were substituted with the average population and death count in Philadelphia County.

The results of the study paint a stark picture of the extreme difference in aggregated health outcomes that can exist in a single city. While those in Old City and Society Hill (19106) have a life expectancy of 88 years, residents of North Philadelphia, specifically around Strawberry Mansion, are only expected to live until 68—a full 20-year difference between the high and low points. 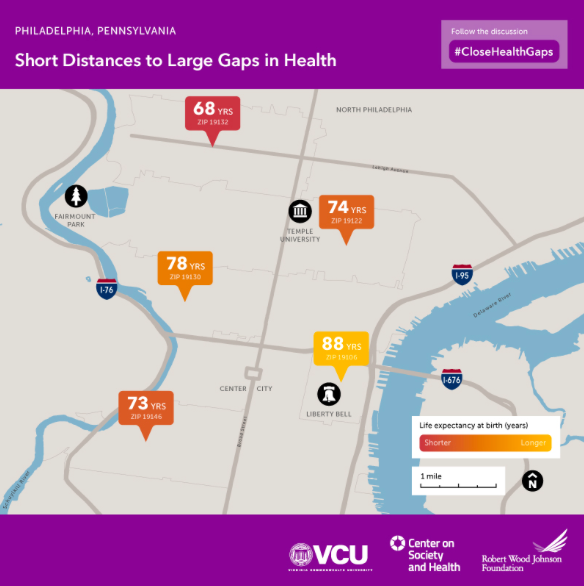 In Philadelphia, Old City and Society Hill are followed by Chestnut Hill (19118) at 84, Logan Square, Rittenhouse, Chinatown, and Washington Square (19103, 19107) at 83, and Hahnemann, Callowhill and Somerton (19102, 19116) at 80. Every other neighborhood is largely scattered somewhere throughout the 70s, but below are a few highlights.

If your neighborhood isn't listed above, you can check out how long you're likely to live here.