Four of five unionized stores in the city participated on Thursday, protesting the coffee chain's refusal to bargain 'in good faith' 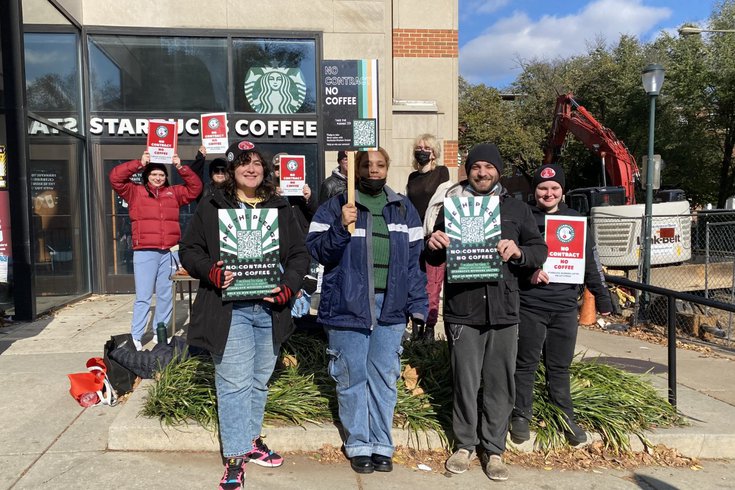 Baristas at the Starbucks on 34th and Walnut streets picketed outside on Red Cup Day, joining a national strike from Starbucks Workers United.

Baristas at the Starbucks on 34th and Walnut streets gathered outside the shop before dawn Thursday, assembling signs and blowing up a giant inflatable rat. By the time the store entered its morning rush, they were leading chants with a megaphone.

"We're trying to get Starbucks to take us seriously and actually bargain in good faith," Tzvi Ortiz, one of the striking workers, said from the picket line. "And we want to hit them where it hurts, which is Red Cup Day."

Workers at four Philadelphia Starbucks locations went on strike Thursday, protesting what they say is the company's refusal to bargain on a contract. Their strike was part of a national action organized by Starbucks Workers United to coincide with Red Cup Day, when Starbucks locations annually giveaway their reusable holiday cup. It marks one of the busiest days for the coffee chain. According to the union, over 100 stores nationwide are participating in the strike.

Starbucks has denied the union's claims that company reps have walked out on negotiations, made last-minute scheduling requests or retaliated against union members. "Nothing could be further from the truth, " A.J. Jones, executive vice president of communications for Starbucks, told NPR.

The 10 workers outside the University City shop held signs reading "NO CONTRACT NO COFFEE." QR codes printed on the signs led to a pledge supporters could sign "to support Starbucks workers in their fight for a union and a fair contract" with fields for contact information to receive alerts for future rallies and protests. Scabby the Rat, the longtime symbol of labor rights, stood guard over the street corner as the striking baristas yelled, "Venti mocha, grande double. Union busters, you've got trouble!"

Ortiz was "amazed" by the response from passers-by today.

"Cars will pass by and beep at us. We have people across the street taking videos. We're getting lots of visibility. And lots of people are coming up to us and asking why we're out here, scanning our QR codes to sign the pledge in solidarity. Yeah, everyone's been awesome."

A passing car cut Ortiz off with a honk of support.

More than 250 Starbucks stores have unionized since last year, representing roughly 3% of the company's nearly 9,000 U.S. locations. Despite its relatively small numbers, Starbucks Workers United has gained national attention and helped inspire other food service unionization efforts, including those at local coffee shops, like ReAnimator.

SOLIDARITY with those striking in Pittsburgh + Philly + across the country today ✊ #RedCupRebellion https://t.co/Mg6P1eZts2

"This day is always hard. There's always a ton of people coming in to get their red cups, and it gets really busy and sometimes we're short-staffed ...to fit the demand for the amount of people coming in, mobiles and orders in the cafe, it's a lot. We try our best, but it's hard.

"At this store, in half an hour they can make our two-week paycheck."

As a cheeky alternative to the store's limited-edition holiday red cups, some striking locations offered their own version of the collectible today. Theirs featured the Grinch's long fingers holding an ornament with the Starbucks Workers United logo.

Why get a normal red cup when you could get a UNION red cup??? 😏✨🎄#redcuprebellion pic.twitter.com/jlYS62Et6c

Alex Riccio, an organizer with the Philadelphia Joint Board of Workers United, told PhillyVoice last month that five Starbucks stores in Philadelphia were currently unionized, with another two pending elections. That means at least one unionized store did not participate in the strike, a result Ortiz chalked up to "capitalist fatalism." The unionized Philly baristas hope to reach more of their coworkers in the city in the coming months, especially those who did not join the picket line today.

"Honestly, it's a lot of hype work," Ortiz said. "You want to really connect with your coworkers and have these meaningful conversations because when we're working really hard, it's difficult to just get one-on-ones with them. Like hey, this sucks. We shouldn't be forced to work in these conditions. ... We think that Starbucks is a relatively good company, they give benefits (and) decent pay for your average retail work in store, but in reality, they could be so much better.