Photo reveals light as both particle and wave 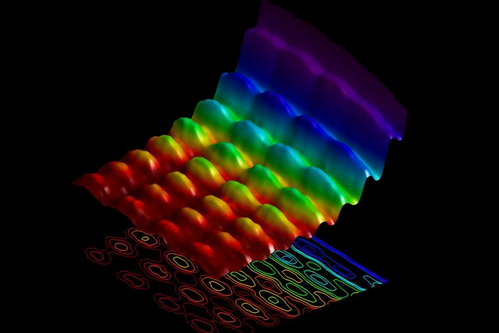 The visualization above represents both spatial interference patterns associated with light as a wave and energy quantization of light as a particle.

Read More
Albert Einstein was awarded the Nobel Prize in Physics in 1921 for his work on the wave-particle behavior of light, helping explain the photoelectric effect and spurring further development of quantum theory.
Though the counterintuitive principle of wave-particle duality has become a popular symbol of the quirkiness of modern physics, only now has a team of researchers successfully taken a snapshot to demonstrate what it looks like.
Swiss and American researchers at École Polytechnique Fédérale de Lausanne (EPFL) conducted an experiment using an advanced electron microscope to capture an image that shows both wave and particle phenomena in the same dataset.
The experiment involved firing laser light at a microscopic metallic nanowire, which initiated light to travel in waves along the wire. In turn, a "standing wave" was created as a result of the initial waves traveling in opposite directions on the wire. Next, the researchers fired a stream of electrons near the nanowire and used the microscope to capture the light and energy exchanged.
Of course, the complexity of the actual physics involved defies very simple explanation, so the researchers put together a video to help explain their experiment and its significance.
The results of the EPFL research were published this week in the journal Nature Communications and could provide an important demonstration of how similar experimentation could advance quantum computing.