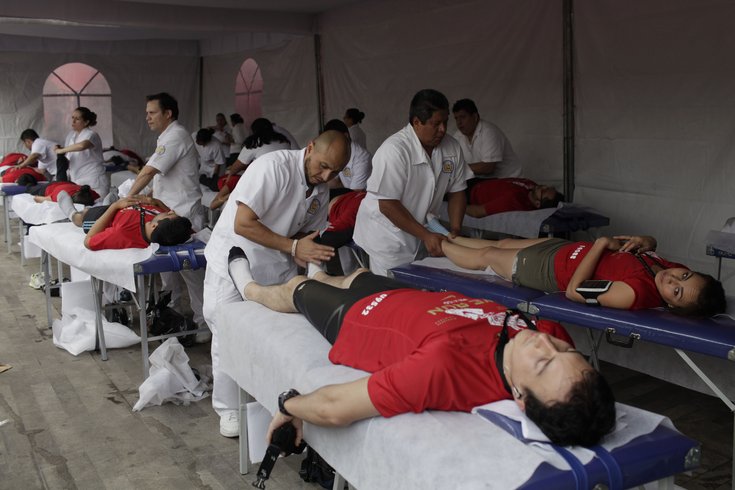 Runners receive a massage after participating in the We Run Mexico 10K event in Mexico City, Sunday, Nov. 24, 2013.

Physical therapy may work as well as surgery for easing symptoms of lumbar spinal stenosis, a common cause of nerve damage and lower back pain among older people, a study suggests.

"Surgery is a riskier procedure, with about a 15 percent complication rate, and half of those are life-threatening," said Dr. Anthony Delitto, chair of physical therapy at the School of Health and Rehabilitation Sciences at the University of Pittsburgh. "It isn't a life-risking procedure to do physical therapy."

Lumbar spinal stenosis, a compression of open spaces in the lower spinal column, can lead to pinched nerves, tingling, weakness and numbness in the back and the lower extremities. The condition becomes more common with age, and an estimated 2.4 million Americans may have it by 2021, according to the American Academy of Orthopedic Surgeons.

Delitto and colleagues set out to see if they could show that physical therapy, long known to be safer than surgery, could work as well as at easing symptoms.

Between 2000 and 2005, they asked 481 patients who consented to surgery if they would be willing to join a study where they would be randomly chosen to proceed with the operation or receive physical therapy. Most declined, to avoid being assigned to the non surgical group, but 169 patients agreed to participate in the experiment.

Ultimately, 87 patients had surgery and 82 were assigned physical therapy.

At the start of the study, patients were at least 50 years old. They had to be able to walk at least a quarter mile without difficulty and have no underlying medical conditions such as dementia, severe vascular disease, cancer, or a prior heart attack.

Most of them were sedentary or only mildly active, and they were typically obese. Patients in the surgery group were slightly younger, about 67 on average, compared with an average age of about 70 for patients receiving physical therapy.

The physical therapy regimen consisted of twice-weekly rehabilitation sessions for six weeks. Participants were allowed to opt out of this regimen in favor of surgery at any point during the study, and over an average two years of follow-up 47 of them, or 57 percent, did just that.

No matter what group they started in, participants achieved similar reduction of pain and other symptoms at two years.

"The study demonstrates that both surgery and physical therapy are reasonable choices; the person who goes down either path ends up in the same place a year or two later," said Dr. Jeffrey Katz, director of the Orthopedic and Arthritis Center for Outcomes Research at Brigham and Women's Hospital in Boston.

Katz, who wrote an editorial accompanying the study in Annals of Internal Medicine, noted that there's still a role for surgery in treating lumbar spinal stenosis. But there's no harm in trying physical therapy first, he said.

Because so many eligible patients opted not to participate in the study, and so many randomly selected for physical therapy abandoned it to get surgery, more research may still be needed in a larger group of patients to get a complete picture of the relative benefits of each option, said Dr. James Weinstein, chief executive of Dartmouth-Hitchcock health system, who wasn't involved in the study.

Still, "surgery should be the last option," said Weinstein, lead author of a 2008 paper in the New England Journal of Medicine that found surgery more effective at curbing symptoms than non surgical alternatives.

Despite the small size of the current study and the number of patients who stopped physical therapy early, it still makes sense to try it before surgery, said Dr. Richard Deyo, a researcher in back pain at Oregon Health and Science University, in email to Reuters Health.

"If they elect to have surgery at a later time, the results appear to be as good as for patients who choose earlier surgery," said Deyo, who wasn't involved in the study. "Some patients are inclined toward surgery because the high tech approach seems more definitive, attractive, and quicker. However, patients should realize they are likely to need physical therapy even after successful surgery, and recovery can be slow."