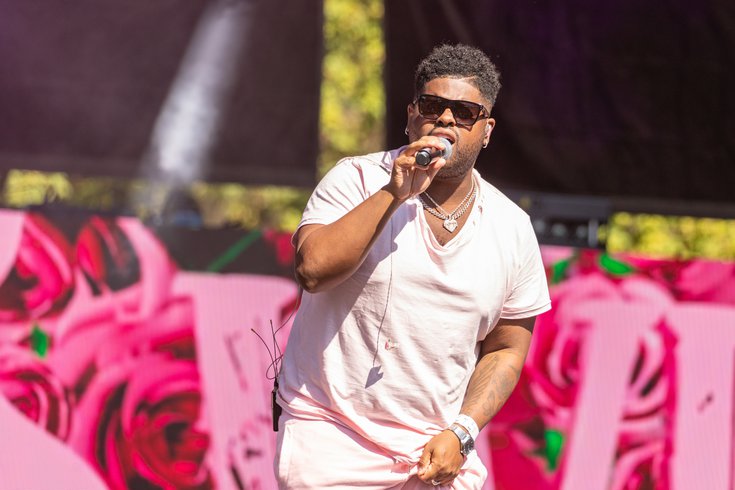 Pink Sweat$, the 29-year-old singer from West Philadelphia, released his debut album 'Pink Planet' on Friday, Feb. 12. Above he is shown above performing at the 2019 'Made in America' music festival on the Ben Franklin Parkway.

Pink Sweat$ is celebrating the release of his album "Pink Planet" with a YouTube series that gives an inside look at the rising musician.

The video series premiered recently with an episode about the West Philly native's family, including interviews with some of the 29-year-old's relatives who are featured on Pink Sweat$'s song "Pink Family."

Pink Sweat$ — whose real name is David Bowden — got his stage name from the clothing he wears in the studio while producing music for artists like Tierra Whack.

Other relatives of Pink talk in the video about what he was like before he grew up to be an R&B artist with millions of Spotify streams and more than 400,000 Instagram followers.

"Always slamming on those drums, always singing and yelling through the house," says his mother.

The video also shares how Pink Sweat$ and his family recorded "Pink Family," the song which includes vocals sung by many of Bowden's relatives, leading to a debate about who is the most musically talented member of the family — Pink even gives the nod to his mother, Gi.

"Pink Planet" also is the title of the artist's debut album, released last week, although Pink Sweat$ has been putting out music since the launch of his solo career in 2018, after recovering from a long and impactful battle with achalasia, a disease which effects the esophagus and makes it difficult to consume foods.

One of the tracks from his 2021 album is "At My Worst," which Bowden released as a single months ago. The song has more than 200 million streams on Spotify and a music video for the track has 65 million views.

You can watch the video for "At My Worst" and stream "Pink Planet" below.