The North Philly natives represent different eras of Philadelphia music, both on display in their contributions to 'ALICIA' 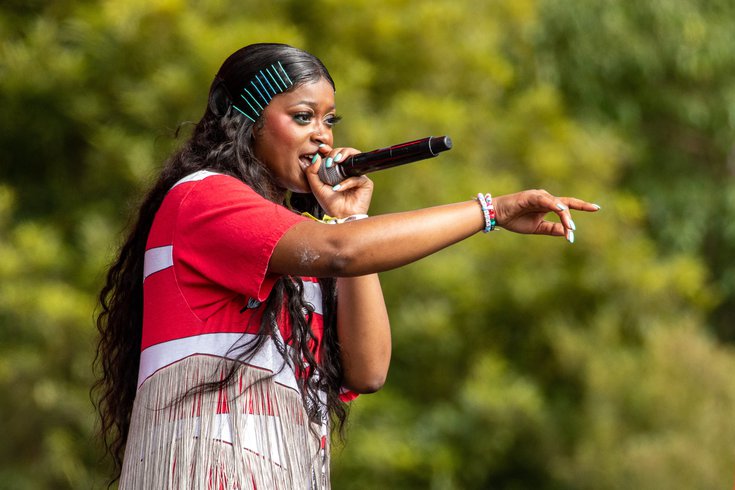 Tierra Whack is featured on Alicia Keys' new album 'ALICIA' along with another Philly-native, Jill Scott. In the photo above Whacks performs at the 2018 Pitchfork music festival, the same year as the release of her debut album 'Whack World.'

Singer-songwriter Alicia Keys released her first album in four years on Friday, titled "ALICIA." Two prominent Philadelphia musicians are among the many featured artists given spotlights on the 39-year-old singer's seventh studio album.

Tierra Whack and Jill Scott are both from North Philly, but represent very different musical eras: Whack, a mumble rap star known for recording songs that are often less than 60-second long, and Scott, a product of the early 2000's R&B boom known for her slow jams.

Both artists are given the opportunity to showcase their unique talents on "ALICIA."

Whack raps on the track "Me x 7." The songs' sparse, playful beats will be familiar to fans of Whack's 2018 album "Whack World," which brought her worldwide recognition.

She's also collaborated with Alicia Keys before during an appearance in the 2019 music video for "Time Machine," another track on the 2020 album. Watch the video here.

The 25-year-old rapper's presence on the "ALICIA" track is mostly a supportive role, with a few interjections and one short solo about Whack's quick rise to fame.

"Yeah I'm in my prime, a few parking tickets but I'm fine. I ain't paid a dime, tell them stand in line," Whack sings.

Scott is featured on the song that Keys' named after the Philly singer, but the track's title is not the only way "Jill Scott" also pays tribute to the Temple graduate and Grammy award-winning R&B singer.

Scott is featured in a short, spoken-word style segment, but the rest of the song showcases Keys singing a high-register – a singing style that 48-year-old Scott has been known for since the release of debut album "Who is Jill Scott" in 2000.

Non-Philly stars such as Miquel, Sampha, and Khalid are also featured on their own tracks on "ALICIA."

Eager Keys fans can stream the album below.