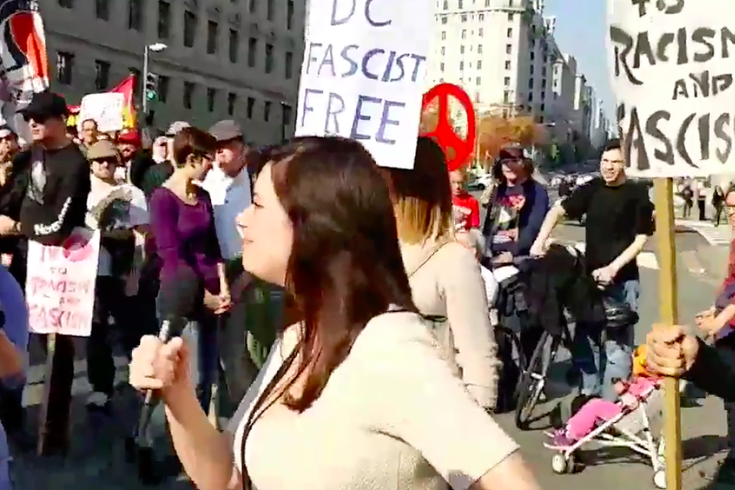 A popular food vendor at Citizens Bank Park was a part of a group that fought with protesters this weekend outside a National Policy Institute conference in Washington, D.C.

Emily Youcis, who is more commonly known as "Pistachio Girl" by Phillies fans, was sprayed with paint by a demonstrator Saturday afternoon outside the Ronald Reagan Building and International Trade Center, according to WUSA9.

The NPI has been called "anti-Semitic, racist, and xenophobic" and prompted an organized protest by anti-fascist-affiliated groups.

The station reported that approximately 300 people were peacefully gathered until Youcis, who referred to the group as "Commies," and a photographer exited the building to ask protesters if they hated white people. One protester responded with spray paint and a fight ensued. The photographer ended up bloodied.

(Note: Video is NSFW due to explicit language.)

After the incident, Youcis said, "I think they're the racists here. Because I've been sprayed in the face, I've been told to f--- off, they bloodied my cameraman, and stole his phone. They're the violent people."

The confrontation was caught on video and eventually turned up on the Twitter feed of David Duke, the former leader of the Ku Klux Klan. Duke lamented that white people who "don't wake-up hating [themselves]" are labeled Nazis.

In the current year, if you're White and don't wake-up hating yourself for it -> NAZI! https://t.co/19VkcHMgK5

Youcis told the Philadelphia Daily News that she supports the "alt-right" movement. From philly.com:

"[S]he was at the conference as an observer but added that she’s been in thrall with the so-called 'alt-right' movement for about 10 months.

She called it 'white identity movement. This doesn’t mean that we hate anybody — we simply want to find our own identity as Americans ... as white Americans, and find our own culture.'"

The incident was the latest foray into controversial political statements.

Last month, Youcis appeared on the "The Gavin McInnes Show" to discuss the "preservation of the white race," how Jews began the culture of political correctness and the availability of children of color up for adoption.

(Note: Video is NSFW due to explicit language.)

In September, she was seen at a Donald Trump campaign event in Delaware County by Philadelphia Magazine. She told the outlet that she became a Trump fan last November when she "started actually just paying attention to the news.”

In 2009, Youcis started to gain notoriety locally through her unique way of selling pistachios at Phillies games. Last year, she finished second in a contest for the league's top vendor.

Youcis noted that she was "More than OK. Didn't even get any fleshwounds" after the incident with protesters.